An announcement from Pyramyd Air: On Tuesday, Oct. 12, they’ll give you a 5% discount off your purchase (some products are excepted) AND let you use their free shipping offer! Get the discount code on their website on 10/12 (coupon is good only on 10/12/09…til midnight Eastern time). Why are they doing this? Because that’s also the day they’ll reveal their new logo, and they want to show it off. Plus, starting on 10/12, they’re changing their shipping policy. Visit their web site on 10/12 to find out about this exciting new change!

Another announcement: There are two new articles online. See It’s only a pellet and The right pellet makes a difference. Now, on to today’s report.

How many times have I heard a firearm shooter say, “If I want to shoot something less powerful than a .22, I use CB caps. They’re accurate and super-quiet and have all the power I need for close shooting. Who needs an airgun?”

I hear that all the time when someone at the range sees me with an air rifle. So, I thought I would test that statement, to see if there’s any truth to it. The rifle some of you drooled over a couple days ago is my Winchester low-wall .22 target rifle, chambered in .22 short. Matt said he wasn’t aware of the short cartridge, but it’s the granddaddy of all modern self-contained cartridges, being first used in Smith & Wesson’s model 1 revolver, which debuted in 1857.

My rifle is called the Winder Musket. It’s named after Col. C.B. Winder, an Army officer who recommended a rimfire training rifle of service-rifle size and weight for marksmanship training in the early part of the 20th century. It’s a target version of Winchester’s 1885 low-wall single-shot rifle. Mine was probably made shortly before 1920, but since Winchester didn’t keep serial number records of this model between 1913 and 1923, we’ll never know for sure. It’s chambered for .22 short, which also means that the rifling twist rate should be one turn in 22 inches instead of one turn in 16 inches for the long rifle bullet. The 29-grain short bullet requires less spin to stabilize.

Winder Musket is a classic Winchester low-wall chambered for .22 short. 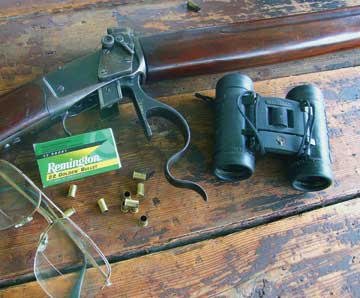 At one time, .22 shorts were considerably cheaper than .22 long rifle cartridges, so shooters favored the smaller round. As several people have pointed out already, the short has enough power to dispatch small game. It’s about as powerful as a hot AirForce Condor running on full steam.

Today, though, the short cartridge offers no price advantage over the long rifle. Factories continue to make the round because of the millions of guns chambered for it, but the long rifle cartridge is by far the favorite, so economies of scale make it cheaper to produce. And, finding standard speed short ammo is very problematic. Everybody seems to want the high-speed stuff. But, when feeding collectible old rifles like this Winder, a standard speed round is better because it doesn’t put as much strain on the gun. Those old steel alloys used in vintage barrels were not as tough as modern gun steels. Because I can’t find standard speed ammo when I want it, I often use .22 short CB caps.

CB caps?
A little history lesson. About a decade before the first .22 rimfire cartridge came about, the French were producing a small rimfire cartridge that used just priming compound to drive a round lead ball. Before that, the Germans used a separate percussion cap to power a small lead ball, but the French round was the first to have the cap and ball combined into one self-contained cartridge. They called it a Flobert cartridge, after the name of the single-shot action it was used in.

Their round was nominally 6mm and is still produced today. Six millimeters is so close to 5.5mm that many guns chambered for the .22 round will accept and fire the 6mm Flobert cartridge. Being lead, the bullet will go through the bore, resizing itself as it goes.

Americans call the Flobert cartridge a BB cap, possibly because the lead ball reminds them of the BBs that are used in air rifles. Or at least that is the best guess I have heard as to where the name came from. Frank Barnes, the author of Cartridges of the World, tried to convince everyone that BB was short for “bulleted breech,” but that name hasn’t become popular. I suppose “ball breech” would be another possible guess.

Well, the CB cap is the same idea as the BB cap, only loaded with a conical bullet instead of a round ball. Conical bullet cap is shortened to CB cap, and that name is more certain. So the CB cap is a cartridge that contains a conical lead bullet and a priming charge but no powder. The first CB caps came in the .22 short cartridge size. That causes problems when they’re used in chambers made for long rifle cartridges, because after many shots the hot gasses will erode a small ring in the chamber, just ahead of the end of the brass cartridge case. That ring starts out as nothing more than frosted-looking metal; but as it grows, it starts grabbing the side of the longer long rifle cases when they’re fired, making extraction difficult. So, it’s best to use shorts and CB cap shorts in rifles chambered for the .22 short cartridge, and CB cap longs in rifles chambered for the long rifle cartridge.

Yes, there are also CB caps with longer cartridge cases that fit the .22 long rifle chamber. But they also have the lighter 29-grain lead bullets powered by nothing but priming compound, so they shoot no faster than the shorter caps. The faster twist rate of a long rifle barrel should be a little fast for them, but it’s probably offset by their considerably slower velocity. 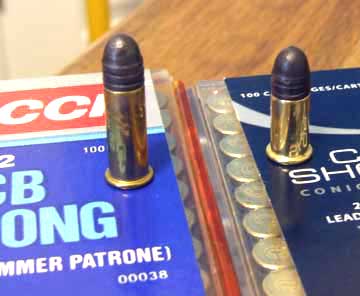 CB long has the same power as CB short. It preserves the chambers of guns chambered for the .22 long and .22 long rifle cartridge.

Whatever the size of the cartridge, these low-powered, self-contained cartridges feed through bolt-action, slide-action and lever-action mechanisms and drive a 29-grain lead bullet at slower speed than a .22 short. They also make less noise. They do not have the energy to power a semiautomatic mechanism, though many semiautos can cycle them manually. After each shot, the shooter has to work the bolt by hand. And, they’re ideal in single-shot guns.

My idea
What I wanted to find out is where do CB caps fit in relation to pellets? Are they really quieter, like some people think? Are they as accurate as pellet guns? More accurate? And what kind of power do they generate? Finally, where do they fit in the cost structure?

As you must know, there are no simple answers to these questions. Nothing is straightforward. So, I posed my little puzzle to all of you in the blog to get your reactions as a means of letting you do some thinking for me. What had I overlooked?

Because I posed the question at the end of the Blizzard report, many of you made a connection between the two. I never intended that, but as someone pointed out, the two do have similar power. The CB caps are advertised to have a velocity of 710 f.p.s. and shoot a 29-grain bullet. That would be a muzzle energy of 32.47 foot-pounds. The Blizzard is roughly 10 foot-pounds more powerful, so it isn’t quite an even contest, just an approximate one. A .22 short standard-speed cartridge drives its 29-grain bullet out the spout at 1,050 f.p.s., producing about 71 foot-pounds, so the CB cap is less than half the power.

Noise
Noise is relative, but when I was on the range with both my Winder and the Blizzard I was able to tell that the Winder is noticeably quieter. That 28-inch barrel is much longer than what is needed to accelerate the bullet. So, just like a pneumatic, the pressure of the gas behind the bullet has diminished by the time the bullet exits the muzzle. Longer barrels equal quieter shooting!

There was also a .22 Czech bolt-action on the range that day, and it was considerably louder with CB caps than the Blizzard. The CZ has a 16-inch barrel. When a legal silencer was screwed on the CZ, it became about as quiet as the Blizzard. So, there you go. Barrel length makes all the difference–just as it does with pneumatics.

Accuracy
The single target I posted on Monday is not the final word for the accuracy of the CB cap. In fact, I need to do a lot more testing to see what it really can do–including shooting the longer CB caps in rifles chambered for the .22 long rifle cartridge. I’ll do all of that, of course, but I already know that the CB cap has an uphill battle if it wants to compete with an accurate pellet rifle. In fact, the question isn’t whether or not the CB cap is as accurate as an accurate air rifle, because I don’t think that it is. Rather, the question is, “How accurate is the CB cap?” 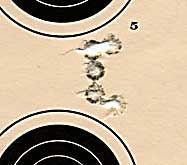 The first group of CB caps I shot at 20 yards was tight, but about four inches to the right. 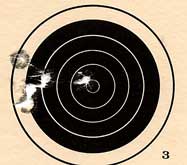 The second group moved a little to the left, but was still more than three inches to the right. 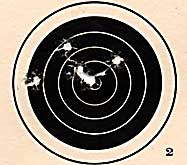 Group three was close to where I wanted it.

Cost effectiveness
This may be the thorniest question of all. The firearm guy will say that a $10 box of CB caps may be all he ever has to buy, so of course it’s cheaper than investing in a good pellet rifle. The pellet-gunner will respond that he gets to shoot a lot more than the firearm guy because he doesn’t have to travel to a range to shoot. And with a quiet rifle like the Blizzard or even a lower-powered Marauder, that is entirely correct. So, the pellet-gun guy considers his “expensive” pellet gun to be more than just a cheap pest eliminator. It’s his primary shooter.

I have no desire to force people to shoot pellet guns, or even to try to convince them that pellet guns are somehow better than firearms. Because I don’t know what “better” means. I shoot firearms, too, and I really enjoy them. But I probably shoot 20-40 times more with pellet guns–partly because of my writing, but also because it is so much easier to do.

However, the statements made about CB caps deserve to be challenged. Today’s air rifles are so capable of accuracy and power that I wonder if these cartridges are a viable alternative anymore.