Today, I’ll test the Norica Goliath 88 Classic Carbine for accuracy. We already know that the scope will be high above the centerline of the barrel, which bothers some shooters because of the parallax at close range. I’ll monitor the situation to see if I notice a problem.

The scope
The Goliath Pyramyd Air is selling will come with a dot sight. The test version I was sent didn’t have any optics. However, I happened to have a nice scope on hand for a different test I just completed, and it was still mounted in Weaver rings, so it was easy to install it on the Goliath. The Osprey International Tactical scope is a 2.5-10×40 with a 30mm tube. It has a coarse duplex reticle with mil-dots on the thin inner lines. The centerline of the mounted scope is approximately 3-5/8″ (9 cm) above the centerline of the barrel, so this should be an interesting exercise! 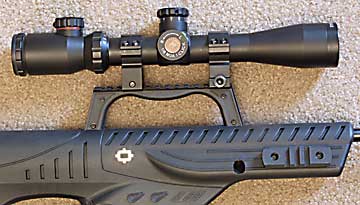 Scope sits high above the centerline of the bore.

I will say this: you’ll need some SERIOUS elevation on the rear ring to bring the pellet up to the aim point. Think about using B-Square adjustables or some other rugged adjustable mount, because the rifle will shoot very low if you don’t.

The pellets
I decided to try Gamo Match, Crosman wadcutters and RWS Superdomes for accuracy. The Crosman pellets gave the tightest spread during the velocity test, and the Gamo Match are just on my good side ever since they did so well in the Crosman Challenger 2009.

However, I’m not going to show you any of the groups from those pellets because they sprayed all over the place! So, I tried Baracuda Match, which is the same as Beeman Kodiak Match, RWS Supermag and JSB Match Diabolo. Both the Baracudas and the RWS Supermags changed the firing sound from a buzzy snap to a hollow crack, so obviously they were creating different firing characteristics. More than likely, the piston was bouncing.

The RWS Supermag shot okay, but it was nothing special. At 25 yards, they grouped 10 in about 1.5 inches. Normally, that’s nothing to get excited about, but compared to the three-inch groups the other pellets gave, it was something. By this time, I’d fired close to 80 shots and was pretty discouraged.

Several variations of the artillery hold
The Goliath stock isn’t shaped like conventional rifle stocks; so when you try to use the artillery hold, it responds differently. At first, I was cradling the gun, with my off hand touching the triggerguard; but when that clearly didn’t work, I moved my hand all the way to the end of the forearm. No dice there, either. I thought this was going to turn out bad for the Goliath, but then I tried the JSB Match. Actually, I changed the hold with the JSB, too. Instead of resting the gun on my hand, I rested it directly on the bag.

The one good group I got was with the JSB target wadcutter pellet and with the gun rested directly on the bag. In fact, it wasn’t just rested, it was pushed into the bag where the triggerguard swoops up to meet the forearm. And it worked! 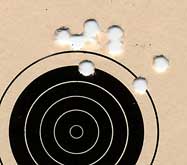 What this tells us is not that this is the best pellet for the rifle, but that you have to experiment with the hold when shooting the Goliath. Just to check it out, I went back to some of the pellets I had tried earlier, but they were still as bad as before. So, you’ll have to try a lot of different pellets as well as learn hold to hold the gun for best accuracy.

I have the impression that this gun doesn’t like to be shot rested and will do its best when handheld. As poor a shot as I am, there’s no way to show that, but if you are thinking of buying one, keep it in mind.