There’s certainly some outspoken interest in the Norica Goliath 88 Classic Carbine, so I shuffled some priorities and rushed this report to the front.

First, let me tell you about the trigger. It’s a two-stage trigger and the only adjustment is the point where the second stage begins. The trigger on my brand-new rifle breaks at between 5 lbs., 6 oz., and 6 lbs., 8 oz. Most often it breaks below 6 lbs. While that sounds like a lot, it doesn’t feel that heavy to me. It breaks very crisply, which is uncommon for most bullpup triggers, so somehow Norica found a way to do it right.

I think the reason I don’t mind heavier triggers is that I shoot a lot of military firearms, and they typically have triggers with pull weights around 5 lbs. and more. I have always been used to this type of trigger and, although I do shoot 10-meter pistols, whose triggers break at just over 1 lb., I don’t mind a sporting trigger being heavier. I’ve had several accidents in which commercial adjustable firearm triggers have slipped off the sear, firing the gun, but there has never been a single accident with a military trigger. I think most owners will enjoy this Goliath trigger.

Max velocity
According to Norica, the Goliath is rated up to 984 f.p.s. That’s what the gun will do when shooting the lightest pellets. Because our readers want to know such stuff, I fired a few Crosman Silver Eagle hollowpoints to see the speed. Lord help me when I finally run out of them! The fastest shot went 1070 f.p.s., so booga booga! In other words–who cares? We want to know what the gun will do with real pellets–the kind you and I are going to use. However, for the record, the Goliath exceeded the advertised spec. Now, don’t go all, “What they oughta do…” on me, because it won’t change a thing. Airgun manufacturers will continue to test their guns with the lightest pellets for the American market, regardless of what anyone thinks.

Crosman wadcutter
Finally, I tried the 7.9-grain Crosman wadcutters. They averaged 817 f.p.s. and ranged from 812 to 821. With a tight spread like that, they’ll be tried in the accuracy test.

Firing behavior
The Goliath doesn’t vibrate too much, but the recoil is something else. It jumps sharply forward at the shot. We’ll have to see what that does to hold sensitivity in the accuracy test.

The hollow plastic stock amplifies the shooting sound. I think some of you are going to want to fill it, though the bullpup design may present problems. Remember, ther’s an action inside there!

The barrel measures 0.568″ outside diameter near the muzzle and, although I can’t be certain, it looks like there’s no step at the muzzle for the brake. The plastic brake that comes on the gun is probably put on with epoxy, so a heat gun of some kind will be needed to release the bond. Pyramyd Air carries a replacement brake from Beeman that’s made of black anodized aluminum.

Next, we’ll see how she shoots! 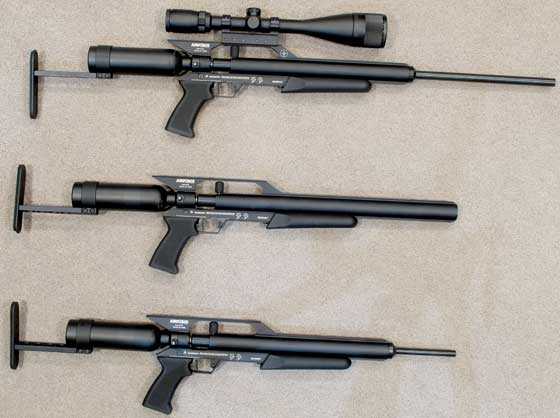