This report comes to you courtesy of reader Jim Grossman, who generously shipped his Relum Supertornado to me to test. The last rifle I tested that Jim had worked on was the Haenel Model 1, which I bought earlier this year from an internet ad. You can read about it here.

I may have mentioned in that report that Jim is a careful airgun packer. I’m sure I did, because his packaging impressed me a lot. So, this time, I captured the details of the packing for you–as well as making a visual record for when I have to send the gun back.

The first step in airgun packing is when Jim selects the box he’s going to fashion into an airgun shipping box. Usually, the little box is so thrilled that he runs out to the playground to tell all the other little boxes that he’s going to be one of Jim’s airgun shipping boxes. They all then share what stories they have heard about Jim’s boxes before the bell rings and they have to come in for their afternoon nap.

Some boxes, however, don’t receive the news with joy. These are the delinquent boxes. Some of them smoke, and most of them curse. They all wear leather jackets and black boots. They don’t care that they could end up on the floors of garages, under cars soaking up dirty motor oil or be cut into pieces and used to light fires on cold winter evenings. They just don’t want anyone telling them what they are going to do.

Jim has a program for these obstinate boxes. He doesn’t give them Ritalin or send them to “Scared Straight” encounters. No, he simply starts fashioning them into the containers he needs. They complain loudly, but what else can they do? They’re boxes, after all. Most of the time, before he’s halfway through the box-making task, the box starts to transform after seeing that it’s about to become a very useful member of society. Almost 98 percent of the boxes Jim works with go on to achieve self-actualization, which for a box is pretty hard to do. Their new owners are so impressed with them that as many as 79 percent of them are stored away in a dark, cool, dry space, awaiting the day they may be called into service again. Perhaps future archaeologists will examine these boxes and try to reconstruct what they might have held.

Outer box (although, at this point, I didn’t know there was an inner box) awaits opening.

Inner box says “Open other side.” You bet I will!

It’s a wonderful, if somewhat humbling thing, to receive an airgun packed by Jim Grossman. On the other hand, if you’re expected to return the gun to Jim, and there’s no documented instance where this has ever happened before now, then it’s downright scary. You feel exactly like a private pilot student at the moment their first solo flight begins. As you unpack the box, you feel like, “Oh, my gosh! The wheels just left the ground! I’m now flying. There’s nothing I can do except land the airplane by myself, because I’m the only one in this cockpit!”

As each braced part of the gun is removed from its carefully fitted cushioned cutout and you see that is is actually cross-braced in its center on both sides and on the bottom, as well, you feel like you’ll never be able to remember where everything goes. “Let’s see, the head bone is connected to the…to the….Oh my gosh, Spock! I don’t remember how it goes!”

Inside the second inner box that was braced inside the outer first box and annotated on the outside to instruct me which side I should open, I discovered a letter. Letters in airgun boxes are a lot like socks at Christmas. Yes, you’ll eventually get to them; and yes, you probably need them–but they shouldn’t get in the way of your fun! However, after carefully deconstructing this double-boxed bank vault to this point, I was hardly going to ignore a set of instructions from the maker! They might begin with, “If the large part begins to tick when you lift it from the foam, quickly retire from the room and seek shelter.”

Flip side of inner box says “Open this side.” We’re getting closer!

Inside the inner box, a letter laid on top of everything. I read it first. Each part has a form-fitted compartment in the dense foam, with shims and cushions on all sides. The stock screws are pressed into the foam and taped in place. Large parts, such as the stock, are inside sacks made from nylons (kinky) to prevent rubbing from the padding. I’m sure there’s a radiological dosimeter in here; I just didn’t find it.

Thankfully, it wasn’t anything like that. It provided the background of the gun, which I will slip into the report as I feel you need it.

Yes, this is an airgun blog, and, no, I’m not just wasting your time. We’ve got the Michaelangelo of airgun packers here, and it’s worth turning aside for a moment to appreciate a masterpiece. Now, drink your coffee, and I’ll get on with the report!

The Relum Supertornado is a spring-piston underlever that loads through a tap. It was made in Hungary at a time before the fall of the Iron Curtain. So, it has a lot of Communist in it and looks a bit crude. It probably works like a champ–kind of like that Mosin Nagant rifle that seems to set me off whenever anybody criticizes it.

The overall form of the rifle is boxy and a bit on the cobby side. Things that would be neatly tucked away in other air rifles stick out on the Supertornado. The angles of the stock and the triggerguard are too sharp, and the forearm feels just like a two-by-four. The beechwood stock is stained an uneven, muddy dark brown. The metal parts are evenly covered with black oxide over a surface that’s about on par with what China was putting out in the 1990s.

It sounds like I’m setting you up for a poor report, but that’s not my intention. From what Jim has told me, I sense that there’s a silk purse inside this hog’s ear. Jim made some repairs and modifications to the rifle, so let’s look at those.

The trigger housing was welded onto the spring tube on a slight cant, which caused the trigger bar to contact the sear on an angle. Eventually, it let go, and Jim was the lucky owner when it happened. He tried to source a replacement, but Relums aren’t exactly mainstream, so he wound up having a machinist make the part by examining the broken pieces and the hole it left in the trigger housing. What had been a stamped steel part is now machined from solid stock and should prove many times stronger and more reliable. 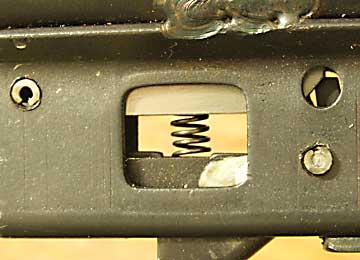 The original front sight was a hooded post on a dovetailed base held fast with a setscrew. Jim replaced it with a Diana model 28 front sight that accepts inserts. He installed a clear aperture that would be found on a target rifle.

The rear sight was a crude but complex folded-metal unit that Jim replaced with a Beeman Sport aperture rear sight. He cleverly uses a rubber fender cushion washer as a disk to enlarge the small Beeman eyepiece for light reduction. 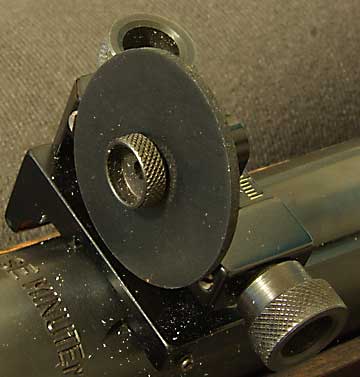 That’s all for today. Next time, I’ll complete the tour and we’ll get to know the rifle.