Today, we’ll look at how accurate this Relum Supertornado is–at least in my hands. I’ll also give you an appraisal of how it shoots.

Though it’s been only a few days since I last shot this rifle, I already forgot how pleasant it is to cock. Most underlevers are bears, with the TX 200 being the most forgiving, but that doesn’t include the fine vintage underlevers like the Hakim. They all cock easily, and so does this one. Just at the point you expect the effort to increase, the sear clicks into place and you’re done.

The upside-down loading tap was a surprise on the first loading; but once I got going, I developed a rhythm and after that I never thought of it. Well, that’s not entirely true, because I had to pay attention to which way the pellets were oriented as they were loaded.

The trigger is single-stage, breaking at 3.5 lbs. That’s not bad, but how it broke was troublesome. As I shot, the trigger varied between breaking without movement and moving slightly at the beginning of the pull. If this trigger was crisper and more predictable, I feel my groups might have been a little tighter.

Follow-through
I also saw the sights move on every shot. It was impossible to follow through and remain on target, so I did the best I could. I think the presence of aperture sights front and rear lulled me into thinking this was a 10-meter rifle, when in fact it’s a sporter. Those sights look so darn precise that I was disappointed in my poor follow-through, though the rifle was the culprit.

Hobbys
The owner of the rifle, Jim, had praised RWS Hobby pellets so much that I tried them first. My first group of 10 was nothing to look at, but from past experience I know this is just due to settling into the rifle. At the end of the other pellets, I shot a last group of Hobbys and the results were much better. 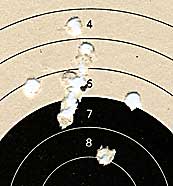 Ten RWS Hobbys at 25 yards with peep sights. This is the better group. The other one is half an inch larger.

My Hobby pellets are a bit old and may not be as good as the ones Jim has. That’s why I also tried a variety of other RWS pellets that were all fresh.

Gamo Match
Next, I tried the heavier Gamo Match pellets. They did very well, if you overlook a single flyer to the left. I’ll blame that on my poor follow-through in this case. 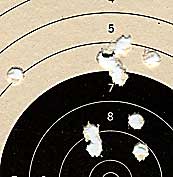 Nine of ten Gamo Match pellets made a nice, tight 25-yard group. Let’s give them the benefit of the doubt.

RWS Superdome
I just had to know how RWS Superdomes would do in this rifle–something other than a wadcutter. Though the string came late in the session when I was settled in, they clearly did not equal the wadcutter pellets at 25 yards. 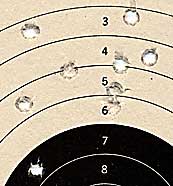 There’s no mistaking that these Superdomes are only mediocre in the Supertornado. There are 10 shots there. The double hole at 12 o’clock has 3 through it. 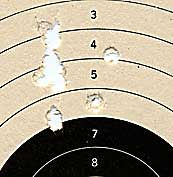 RWS Meisterkugeln pellets were the clear winner when I shot the Supertornado. Six of them could be covered by a nickel!

Well, as I finished the accuracy testing I had to reflect on the whole Supertornado experience. I can see why Jim loves this rifle. Though it’s a bit plain to look at, it feels nice when shooting and delivers on target. All the work he put into the rifle to get it running no doubt cements the relationship.

The target sights make the gun in my opinion. Besides the smooth firing behavior, the sights make shooting very enjoyable. The trigger, on the other hand, leaves a lot to be desired. It’s a trigger to get used to.

I now have the onerous task of packing this rifle back into its shipping container and sending it back to its owner. Somehow, I think all the preparation he did in making the container will help a lot with that task.

Thanks are due to Jim Grossman for sharing this uncommon air rifle with us. He’s given us all a look at an unusual vintage rifle, and it’s one not many airgunners will ever see. 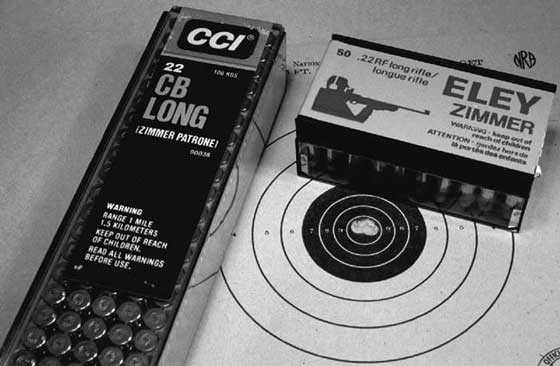 Are CB caps as good and accurate as pellets? Part 1