Today’s report has my name on it, but my friend Earl McDonald is the one who did all the work, took the pictures and wrote the specifics. I just took what he gave me and put it into the blog report format.

This report is for the owners of RWS Diana sidelever rifles of the T05 variety. That’s models 48, 52 and 54. If you want to mount a globe-type target front sight on your rifle, Diana makes a special unit to do this and Umarex USA has a few of them in stock.

While at the 2010 SHOT Show, I spoke with Glenn Seiter about what sorts of parts and neat things he had in the back room at Umarex USA, which is also RWS USA. One of the things he mentioned was this front sight. My buddy Mac has two RWS 54s in .22 caliber and was very interested to turn one into a target rifle with peep sights. This sight would make that possible.

This is a new front sight base that fits on a T05-series RWS Diana 48/52/54. The new base accepts a standard Diana front globe sight with replacement inserts. If you install this sight option, you’ll also need to install an aperture rear sight to work with it, and I’ll cover that for you as well. 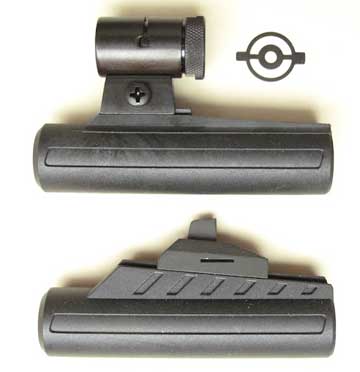 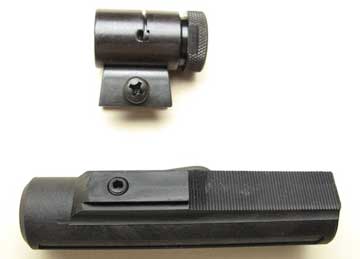 Here’s the special front sight base with the globe sight removed.

Glenn also sent new sight inserts to Mac so he could test it for you. He told me the insert with a 2.2mm hole proved best for shooting bullseyes at 30 yards outdoors.

Only fits the T05
This front sight base fits only the new series T05 guns. The earlier T01 guns have a different style of base that’s not interchangeable with this unit. The T05 rifle has a beveled flat that’s machined into the steel barrel and a corresponding bevel inside the T05 front sight base. The T01 rifle sight base clamps onto dovetails cut into the top of the barrel at the muzzle. 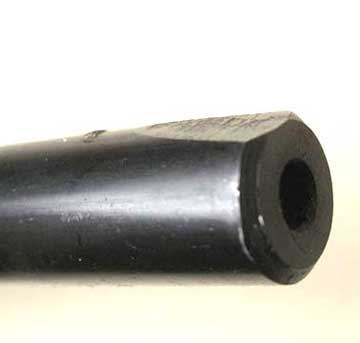 The top of the T05 barrel has a bevel machined to accept the front inside of the T05 front sight base. 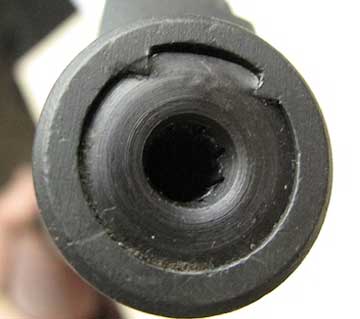 The top of the T01 barrel has dovetails to accept the front sight base.

If you were to machine or file a bevel on the steel barrel of a T01 rifle to accept the T05 base, it would have to be precise or the front sight would mount with some degree of rotation. That would ruin the rifle. I’m not saying that the conversion of a T01 rifle can’t be made–just that it’s a precision fit requiring careful work.

Time for the rear sight
Once Mac had the new sight installed and had determined that it fit only a T05 sidelever (he owns two 54s–one a T01 and the other a T05), it was time to select a rear sight. Initially, he tried a vintage Diana rear aperture sight, but the bottom of the dovetails on that sight are beveled rather than flat. That interferes with the fit on the sight base of the rifle, and the sight cannot be installed. 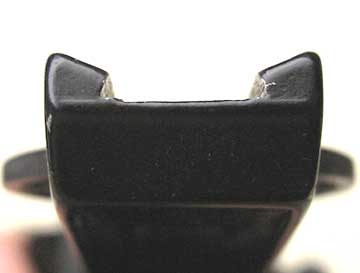 Vintage Diana aperture rear sight has odd-shaped dovetails on the bottom that prevents installation on a sidelever rear sight base.

Next, he tried a Mendoza rear aperture sight. It fit the rifle fine, but could not be adjusted low enough to work. Mac says the lowest it would go was shooting 8 inches high at 30 yards. 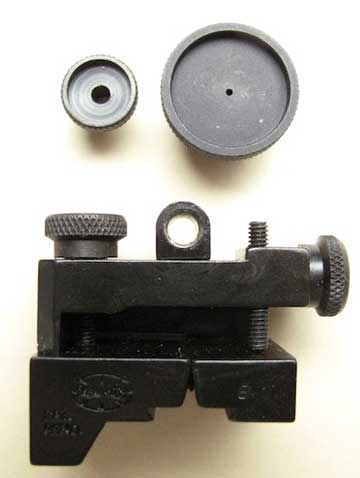 A Gamo rear aperture sight saved the day. It installed on the rifle and the adjustment range was fine. Mac cleaned the sight base on the rifle, then put one drop of epoxy on top of the rail and installed a Gamo aperture sight. Naturally, he knew exactly where he wanted this sight, because once the epoxy hardens the sight will be very difficult to remove.

The old Gamo rear aperture sight worked well. This sight no longer exists, but the Air Arms rear diopter may also work. Don’t buy one until you are sure

If any reader owns a Diana sidelever, I’d sure like to know which currently made rear diopter sight fits the sight base.

How does it work?
After the sight was set permanently, Mac went outdoors and rested the rifle across the tool box in the bed of his Mazda pickup. AlanL, are you listening? He then proceeded to shoot group after group at 30 yards using the Crosman Premiers that have proven to be the best in this rifle. The largest group of five measured 0.31″ between the two widest centers. This was on Maryland’s Eastern Shore with three feet of snow on the ground, the thermometer well below freezing and the wind blowing.

So, if you want peep sights on your T05 sidelever, this looks like the best way to do it. Of course you can use a rear aperture sight with the existing post front sight that comes on both the T05 and the T01 rifles. But, if you want the globe with replaceable inserts, this is how to do it.

To buy a front sight ($39.95 and comes with one insert) and replacement inserts ($5.95 each), contact Glenn Seiter at Umarex USA. There are a limited number of this special front sight in stock, and once they are gone there won’t be any more. Act now if you want one.