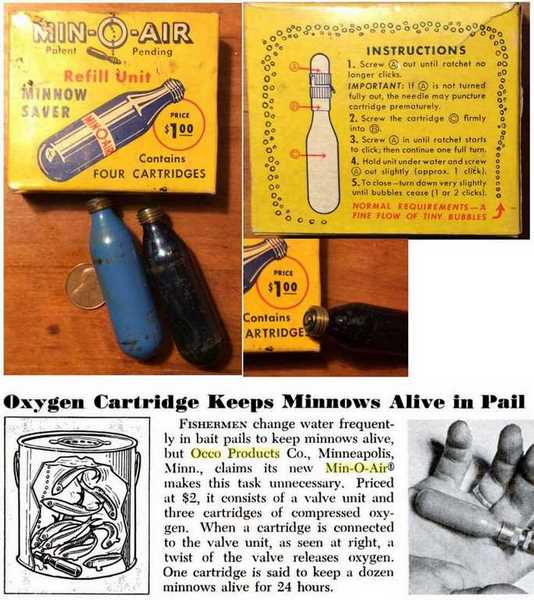 Sorry about the blog last week. I was ill and out of my head part of the time, so I forgot about the huge three-part report on air transfer ports back in 2008 and did another one just like them only smaller on Friday. We also got some questions that I said I would blog, and I think today’s report is for one of them, though I cannot find the original question. So, I might miss the crux of the question, but I hope to show you something many of you have never seen or even heard of.

I also think I told Matt that I would shoot firearms at a shovel, to see how effective it is as a bullet shield. Before I ruin a garden tool, how about somebody setting me straight on the real importance of this? Matt?

Today, the question is about refillable CO2 cartridges. And several readers have already responded with the correct answer. That is what bulk-filling is all about. It does work very well, we know that it works well and nobody disputes that fact. Back in my Airgun Letter days, I calculated the difference in cost between a 12-gram powerlet and a bulk charge that gave the same performance. The price of a fill dropped from around 50 cents per cartridge to less than a nickel for an equivalent fill that gave the same number of shots and power. The bulk pistol I used was a .177 Crosman 111 that got 50 shots per fill at over 600 f.p.s.

So, that part of the question is answered, but I don’t think that was all the reader asked. Almost everybody who shoots CO2-powered guns ends up with a mound of metal containers that look like they should have some value, but don’t. For the past 60 years, airgunners have made them into targets, wind chimes, and other items that extract a small amount of secondary use. But the cold hard fact is that you can’t find enough uses to eliminate them all. Maybe if your castle was under siege you could load them into the cannons to repel the invaders. Lacking some wholesale use like that, you’re going to have empty cartridges to throw away.

If you don’t like it, try to convert your gun to bulk-fill operation. That’s the only way I know to get around the problem, and we all know that doesn’t always work. When the space inside the gun for the cartridge is very conformal and restrictive, there will often be no practical way to convert the gun to bulk-filling.

Therein lies my short and humorous tale for today. Back in the late 1990s, when The Airgun Letter was published, a British firm came out with a solution for this problem. Don’t convert your CO2 gun to bulk-fill. Convert it to a precharged pneumatic!

Well, let me tell you, this was all the rage when it first came out. What you got for your money was a device that let you refill a cartridge the size and shape of a 12-gram powerlet with 3,000 psi air. The cartridge was then removed from the fill station. It held the air because it had an inlet valve that was shut by the internal air pressure.

The cartridge would then be placed into a CO2 gun, where the piercing pin was supposed to force the internal valve open. That allowed the air to exhaust into the gun. 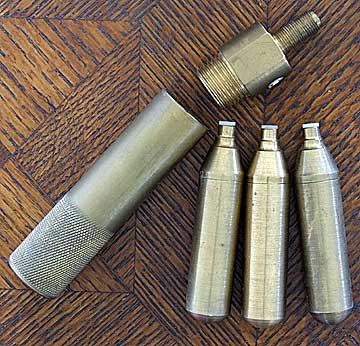 This is the system being explained today. The fill station is comprised of the two parts on the left, and the three cartridges that get filled resemble CO2 cartridges. 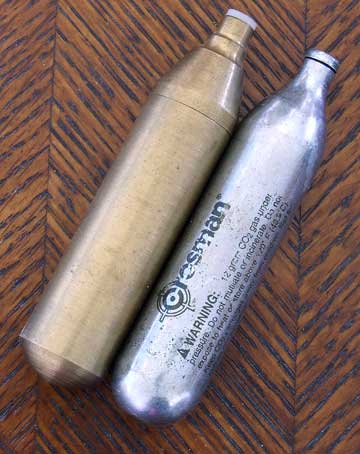 For comparison, here’s one of the refillable cartridges and a standard 12-gram expendable CO2 cartridge.

Here are the things that disturbed me about this design. The gun was set up to run on CO2 at about 900 psi. All the seals were optimized for the large CO2 molecule and are nowå being asked to work with far smaller atoms of air at triple the operating pressure! I doubted that the durometer ratings of the seals, plus the tolerances of the o-ring seats and valve faces were right for such a job.

No worry, I was told by the manufacturer. The exit hole in the cartridge was very small, so that 3,000 psi air didn’t come out as fast as it normally would have.

Then there is the length of the CO2 piercing pins in each gun that had to be long enough to open the valve inside the cartridge. Are you aware of the gross differences there are in the length of these pins? Many of you own guns whose pins are not long enough to pierce a standard CO2 cartridge, and yet this thing depends on everything being the right length all the time.

Does that sound like exacting science to you? It didn’t to me, but my readers pleaded with me until I finally popped to the tune of $150 for a system and two extra cartridges, bringing the total to three. Okay, I was ready to test.

Except for one thing. The freakin’ system was only held shut by one or two coarse threads of the brass fill container when it was time to fill each cartridge. The variation was due to a variable length of each refillable cartridge. 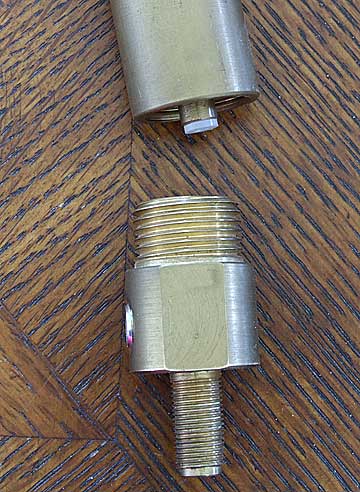 Here is the refillable cartridge in the refill station. 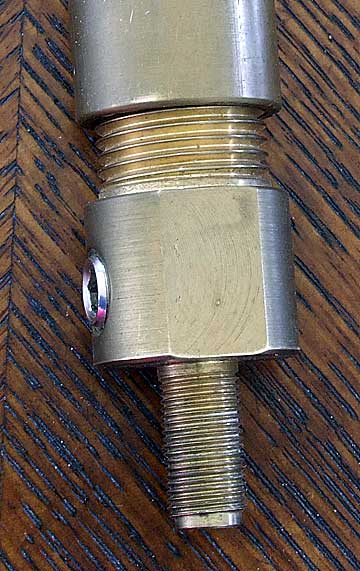 This is how far the top screws down. I don’t know about you, but I sure don’t want to put 3,000 psi into that cartridge with just a couple brass threads holding things together.

Here’s what’s wrong with all of this. You don’t use brass in 3,000 psi equipment when it’s expected to contain the full pressure. You don’t thread with coarse threads when you want a joint to hold under extreme pressure. And you sure as hell do not trust your life to the strength of just one or two threads for closure!

I may not be a rocket scientist, but I can usually spot a potential bottle rocket!

I never tested this system, but I made a report in The Airgun Letter that was very similar to this one, in which I showed the equipment and discussed my concerns. Apparently, the British firm that made the equipment had never been confronted by a negative review before, because within a few weeks we received what amounted to a “Cease and Desist” letter from the company’s lawyer.

I cannot tell you how much that threat pleased me. I published it in The Airgun Letter and responded that we were a U.S. publication and even though the company no doubt had deep pockets and used lawyers as business tools, I had said nothing in my report that couldn’t be proved in a court of law. In fact, I think the trial would have been quite a circus.

Today’s moral is this–if something sounds too good to be true, if it seems to defy physics, then you’re probably better off not trying it yourself. I remember all those “magic” carburetor modifications of the 1950s and ’60s that were supposed to boost power and gas milage at the same time! We were paying 31 cents for a gallon of gas and were still too hard-headed to recognize that a huge V8 motor tasked to push a lead sled riding on bias-ply tires was always going to use a lot of gasoline.

Can you refill co2 cartridges?

It is not possible refill common 12g CO2 cartridges, although some have tried.  You may be able to purchase a bulk fill canister or you may find larger 12oz refillable tanks.

Buy your CO2 cartridges in large quantities. And please, don’t wonder if this same system could somehow be adapted to operate on CO2.