Before we start, I have an announcement. I’ll be on Facebook answering questions again on April 8th at 8 p.m., Eastern. The last time was during the work day, which may have been inconvenient for many people, so we’re giving this time slot a try. Please join me if you’re able. I’ll be answering airgun questions on Facebook on this Pyramyd Air Facebook page. To see the discussion and ask questions, you must have a free Facebook account.

Today, I’ll start the tuneup on this rifle, and I have some very interesting things to show you. I’ll get through the disassembly in this installment, and in the next part I’ll tune the rifle.

I purchased a Maccari Mongoose tune kit that includes the mainspring and seal. I also bought a new breech seal to replace the new one in the box that had hardened over the years. Finally, I bought some of Jim’s Heavy Tar and his moly grease, because I’m getting low on those supplies.

This is the kit and lubes.

Step one in disassembly is to remove the action from the stock. That’s two forearm screws and the front triggerguard screw. The moment the action was out, I saw clear evidence that this rifle had received some kind of tuneup in the past. I could see that the mainspring was coated with black tar, a product they didn’t even know about in the 1970s when this rifle was new. For a few minutes, I thought maybe I had done it and had forgotten I did, but as the gun came apart I saw proof that I had never been inside.

Once the action is out of the stock, it goes into the mainspring compressor. Blog reader Vince said that he doesn’t use a compressor, but the 124 is one of those rifles that really needs it. And here’s a big tip. When you adjust the compressor to receive the rifle, leave a lot of adjustment room on the screw that backs off the spring tension. You really need the room there. 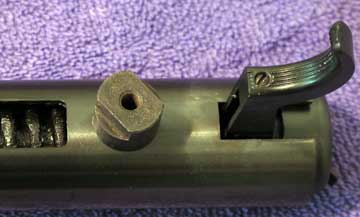 The single bolt in front of the trigger blade holds the 124 action together. 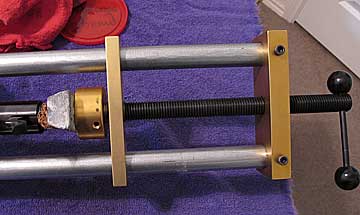 Leave lots of room for the mainspring to back up. 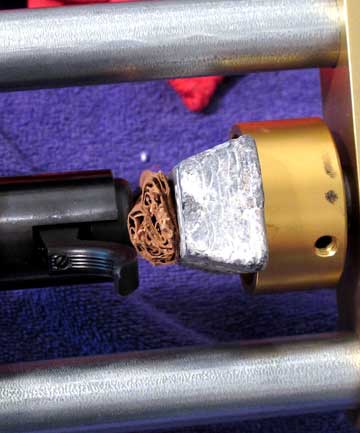 I use a heavy cardboard pusher to avoid damaging the rifle’s finish.

The trigger assembly and safety slide came out without a problem, as did the mainspring. It was in very good condition; but I’ve purchased a replacement whose pedigree I know for certain, so I’ll replace it anyway. 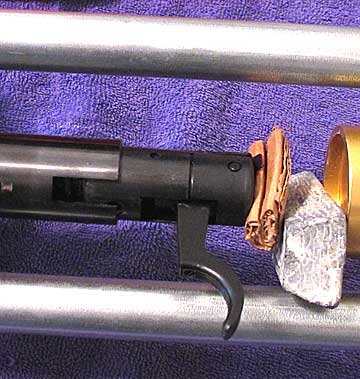 With the tension off the mainspring, the trigger unit moved almost two inches back. It will need an extra inche to install the new spring.

The trigger unit contains the mainspring guide. The old spring is in pretty good shape. That’s the assembly bolt that held the rifle together.

Before the piston will come out, it must be disconnected from the cocking link. For that to happen, the barrel has to come off the action fork. When I pulled off the barrel, I saw no evidence of moly grease on the sides of the baseblock or on the pivot bolt. They were lubricated with a light machine oil. That’s a clear indication that I’ve never been inside this airgun. 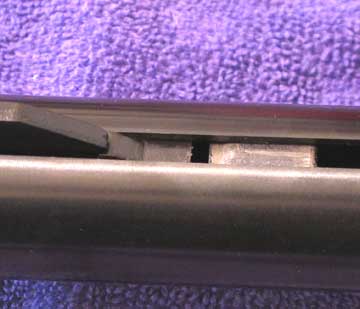 The cocking link fits into the cocking shoe that is held captive inside the piston until the barrel is disconnected from the spring tube. 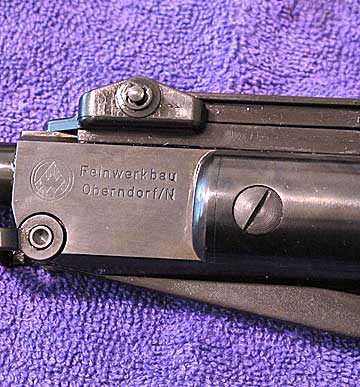 The pivot bolt is the large screw on the right. Take it out and the baseblock separates from the action fork.

Now the spring tube is disconnected from the barrel and the piston slides out easily. When I saw this one, I knew the seal was gone. Just look at the picture! 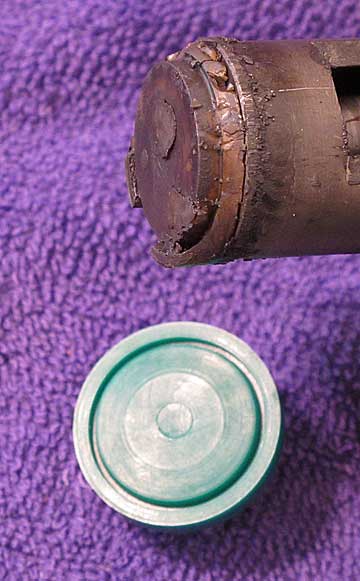 A classic case of a disintegrated piston seal, with the new one for comparison. This happens to FWBs, Walthers and Diana recoilless guns made during the 1970s.

Usually, I can pop out an old 124 seal in a few seconds. This one took an hour. Although the top part had disintegrated, the bottom was still fresh and strong and fought me at every point. I finally had to cut it into four sections to pry one of them out. 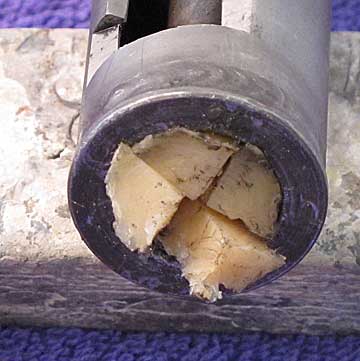 Took me an hour to cut the old seal up. Hardest replacement I’ve ever encountered. 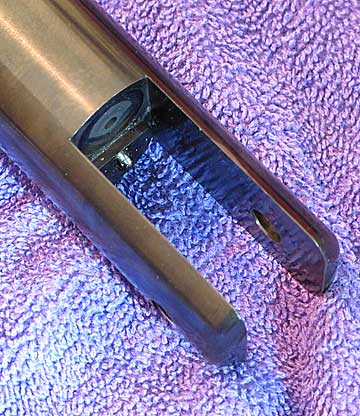 This is the action fork I mentioned earlier.

Okay, with that much disintegration of the seal, there will be lots of seal parts inside the compression chamber, as indeed there were. Use something sharp and pointy to dig them out of the corners, where they will have impacted over time. I used a patch extractor on the ramrod of my Thompson/Center Hawken. Then, I wrapped paper towels around the end of the rod and soaked them in denatured alcohol to clean the compression chamber. There was no moly there–another indicator that I have never been inside this rifle. Clean until all the seal particles are out and the compression chamber sparkles.

All the oil needs to be cleaned off the baseblock and the action forks. They’ll get a coat of moly grease when they go back together. The pivot bolt will also get a coat of moly, but I’ll describe all that in detail when I tune the rifle.

That’s as far as I will go today.