Before I begin, don’t forget that on April 8 at 8 p.m., Eastern, I’ll have a special Q&A session on Pyramyd Air’s Facebook page just for you. Please join me then. You must have a free Facebook account and be a friend of Pyramyd Air to participate.

Before we begin, I have an airgun-related story for you. Edith and I own a Select Comfort bed–the kind that is called a Sleep-by-Number bed today, but 15 years ago it was just Select Comfort. The air compressor that inflates both mattresses finally went belly-up this past weekend, so we ordered another. But while trying to fix this one, air was let out of both mattresses, and the bed was unusable until the new compressor arrives.

I used a CO2 bottle to inflate one mattress, but I ran out of CO2 before the job was finished. So, I used a scuba tank to finish the job. It did the job in less than a minute, and although I have to admit that it was not convenient to do, I was sure glad we were able to do it, because I love that bed. I would not have enjoyed sleeping on a lesser mattress for even a few nights. In the past I have also used a bulk tank of CO2 to extinguish a car fire, and now this. It’s just one more reason I’m glad to be an airgunner.

Today, we’ll take a look at the power of this RWS 92. Several readers were familiar with this airgun, so this should be a revealing day for them.

Next, I tried JSB Exact 8.4-grain pellets. Being heavier, they should be slower; but being made from softer lead, they may be close in velocity. It came as only a small surprise that they averaged 635 f.p.s. The spread went from a low of 626 to a high of 647, so just 21 f.p.s. separation. The rifle’s more at ease with this pellet, though we’ll have to await the accuracy results to know for sure. The energy is a more lively 7.52 foot-pounds.

The power fits in with my observation that the 92 is 7/8 of an FWB 124. It’s a great place for a plinking rifle to be. A little less than advertised but still very useful.

Firing behavior
The rifle is fairly calm when it fires, but there’s a jolt. The barrel was too loose when I tested because it would not remain in any position after being cocked. I took the action out of the stock and found the locking screw for the pivot bolt that Vince told us about. I tightened the pivot bolt, but then it didn’t align with the locking screw with or even without the spacer he put in, so I removed the pivot bolt and reshimmed it to torque the bolt a little more. It doesn’t change the velocity, but it may help the accuracy when the time comes. I see what Vince means about those notches being hard to align when doing this job, so I was glad for his fix. 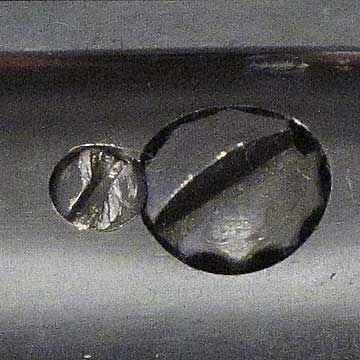 Here you can see the barrel pivot bolt locking screw clearly, and how it must fit into one of the scallops cut into the periphery of the pivot bolt head. If it’s off, the locking screw won’t fit. A small shim under the pivot bolt head causes it to end its rotation earlier than normal. You can also see that the next notch is very far from this one, so the shim must be much thicker.

I did slice my finger while working on the action outside of the stock, which is a reminder that the metal parts on many spring rifles have razor-sharp edges unless you take the time to dull them. Normally, that’s part of a tuneup. It’s not the sexy part nor does it add anything to the bottom line, but it’s the thing to do for your own peace of mind whenever you work on the action again.

The two-stage trigger-pull breaks at between 3 lb.., 2 ozs. and 3 lb.., 14 ozs. I attribute the large difference to the second-stage creep, as you would expect on a rifle in this price range.

When out of the stock, the 92 also resembles the FWB 124 more than a little. I would expect disassembly would be similar to the German gun. Looking through the cocking slot, I noticed that the mainspring was coated with moly paste, which confirms that this rifle was lubed after it came from the factory. 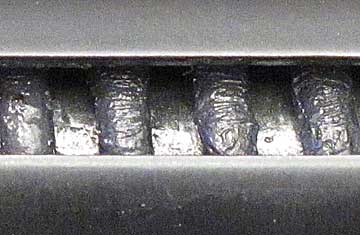 Moly grease on the mainspring is a giveaway that the rifle was tuned after the factory lubed it.

So far, so good. It looks like the RWS 92 is a fine plinking pellet rifle that was a great value when it last sold at $100. Next time, I’ll check the accuracy, which will be interesting with these all-plastic sight parts.