Update on Tom/B.B.: Tom has moved out of ICU to a regular room, is able to get out of bed and walk unaided for several steps, have visitors other than family and is eating real food. It’s the simple things in life that bring us joy!

Let’s move on to today’s blog, which is about the Daisy Avanti 888 Medalist. Today’s blog originally appeared in the November 2000 issue of The Airgun Letter. 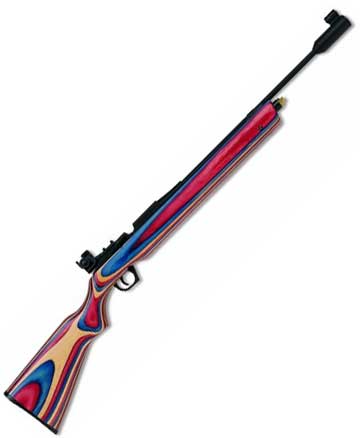 The 888 Medalist’s laminated stock is in sharp contrast to what Daisy usually turns out.

I was pleased to receive one of the first production model 888 Daisy 10-meter rifles from the Avanti line.

Is the Daisy better than the new Crosman Challenger? I won’t answer that directly, because I don’t believe there’s a single correct answer. Both guns have features never before seen in youth-market target guns. I’ll try to point out the Daisy’s features for coaches and parents, so they can make a reasonable choice between two fine target rifles.

The first technical feature is perhaps the biggest difference between the two. Where the Crosman uses either high-pressure air or bulk-fill CO2, the Avanti 888 is a bulk-fill CO2 gun only, operating from a screw-in 2.5-oz. tank. The Crosman gets approximately 70 shots per tank on air (at 530 fps), and the Daisy gets hundreds of shots per CO2 tank (at 560 fps). That’s pretty incredible when you consider the power source.

Five shots with Chinese lightweight wadcutters (left) were okay; but in the 888, H&N Finale Match pellets stole the show!

Not only is the velocity high, the shot-to-shot consistency is quite remarkable. It’s as good as a top precharged target rifle with a good regulator. These shots were chronographed well into the charge, so there’s no special effect being derived from the first few shots after the fill. This, plus the pinpoint accuracy with H&N pellets, was quite a surprise.

Daisy’s web site says the gun shoots 500 f.p.s., so perhaps ours was a bit hot. Still, I liked the extra speed and would hope it was there on any gun I owned.

The 888 is built on the 853 action. A long, skinny gas reservoir fits where the 853 pump lever and compression tube would be; and it unscrews for filling, so Daisy sent a wrench to loosen it. 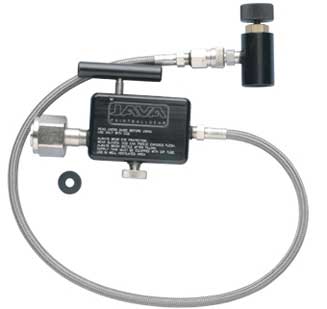 You’ll need a fill device to pressurize the Medalist’s bulk-fill CO2 tank. This one is made by Kingman.

Because of the narrow diameter of the separate CO2 reservoir, an hour’s pre-chill in the freezer helped introduce more liquid CO2 into the tank, though I never got close to the rated 2.5 oz. Even so, the 1.6 oz. that did go in were enough for hundreds of shots. 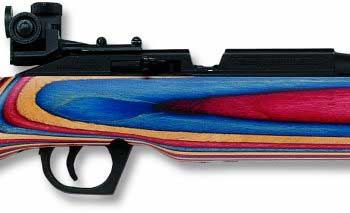 The 853 receiver is used, but cocking is easier and the trigger seems crisper.

Daisy sells the rifle with the same aperture rear sight that comes standard on the 853, but I would assume most buyers will upgrade to the better unit made by Gamo. The Daisy sight requires three adjustment clicks in the direction you want to move to take out the slack. Of course, if you have to move it more in the same direction, there’s no more slack.

The stock is laminated wood and has a solid feel. Together with a most functional muzzle weight, the rifle balances well, with a slight but noticeable muzzle-heaviness. The laminate stock does add some weight. The 888 weighs about 6.9 lbs., so coaches and parents should consider that. By comparison, the 853 pneumatic is about 1.5 lbs. less.

Along the bottom of the stock is a functional accessory rail for a sling mount. It’s indexed so the rifle can be quickly returned to any setting–always a plus when many shooters have to share equipment.

The trigger will be a welcome change to those who now compete with an 853. It’s lighter and crisper than the pneumatic. No doubt there will be some popular mods for it in a short time, because it is not adjustable, as far as I can tell.

Another happy point is the cocking effort. The 853 is a real bear in this department, but the 888 is a dream. That will keep young shooters fresher during a match–to say nothing of the huge advantage of not having to pump the gun for every shot. Heavy or not, the 888 is better-suited than the 853 for young shooters.

The pellet trough is still a bit small for adult fingers because this is an 853 action. It helps place the pellet on the right side of the receiver, where it’s flat, and roll the pellet into the trough. Once there, the bolt pushes it smoothly into the breech.

The bottom line is that Daisy has built a winning rifle.