How the airgun calibers of today came to be

• The 4 modern smallbore calibers
• The point I’m making
• But how did the calibers we have today come into being?
• Airguns are being developed, too
• Zimmerstutzen
• Birmingham, England, 1905


This question was asked by blog reader, Joe, many weeks ago. He wondered why the airgun calibers we have today are the sizes they are. This is an open-ended question that will never be fully answered, but maybe I can put a small part of it into perspective for you today.

The Bullseye Pistol introduced the .12-caliber round ball that lasted from 1923 through several incarnations of Sharpshooter pistols made through the 1980s and also with the Daisy company in their Targeteer pistols, which were made in the 1930s and ’40s. While these pistols mostly used No. 6 lead shotgun shot, Daisy did manufacture copper-plated steel Tiny BBs in .12 caliber for a time. 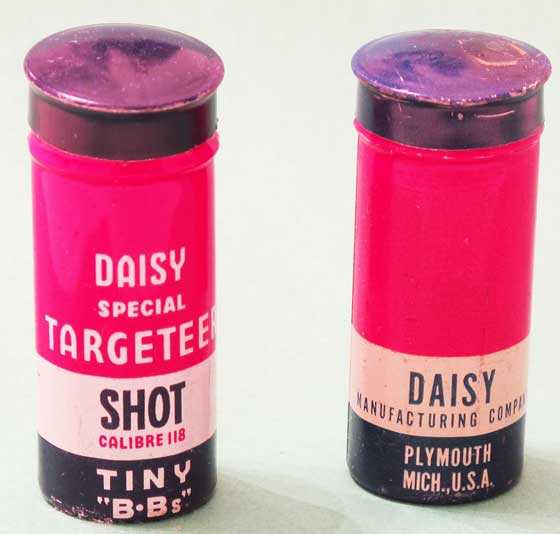 Daisy made special .118 (.12-caliber) steel BBs for their Targeteer pistols.

The Crosman, Quackenbush and Daisy offerings were designed to limit the supply of ammo to their own companies. What they did, instead, was limit the number of buyers willing to go out on a limb for a gun that shot ammo that was hard to get. Ask someone who owns a gun chambered for Remington 5mm rimfire or Winchester WRF cartridges how easy it is to buy ammo today.

The point I’m making
The point I want to make is that it is very risky to introduce a new airgun caliber. Even for major manufacturers such as Crosman, Gamo, Weihrauch or Hatsan, it would be a huge risk to bring out a new caliber for which there were no pellets. The pellets would have to be made, they would have to be distributed and dealers would have to stock them before the new caliber could be successful. And nobody’s going to do that unless the new caliber offers something the existing calibers don’t already have. The .20-caliber pellet has struggled from 1948, when Sheridan introduced it to the world, until the present day, where it’s in last place among the 4 smallbore calibers. It wasn’t until the powerplants began developing reasonable velocities that the .25 caliber finally took off.

What you may not realize is that lead diabolo pellets are harder to make than many kinds of firearm ammunition. While they appear simpler becauser they are made from one homogeneous material, the precision to which they’re made goes beyond that of the most particular bullet makers. According to Dr. Robert Beeman, the H&N engineers told him that if we want pellets to become any more precise, we’ll have to control them down at the molecular level. And pellets are made by the millions — not in small hundred-thousand-unit batches like precision firearm bullets.

There were some experiments with a .14-caliber pellet several decades ago. Pellets that small offer the advantages of using less materials, which, with the price of lead rising all the time, is important. They also allow smaller powerplants to shoot them at reasonable velocities for things like target practice and plinking. Target shooters want holes in paper, and plinkers want to hit their cans and plastic army men. Neither group cares that much about the size of the pellet. So, why didn’t .14-caliber pellets come to market?

They didn’t because of the overwhelming inertia of the .177/4.5mm pellet. World Cup and Olympic competition is all based on .177 caliber, and the enormous investment in equipment is too large for a newcomer pellet to overcome. All the scoring equipment, targets and guns would have to be changed if this caliber were to change. That isn’t likely to happen, any more than Olympic swimmers are likely to start competing in salt water!

To learn about that, we need to go back to about the year 1845. That was when the French inventor Louis N. Flobert employed the brand-new explosive priming compound that was being used in the new percussion firearms to propel a projectile all by itself. He had to use small projectiles because the priming compound didn’t have the power that gunpowder had, so he experimented with very small lead balls — often 6mm (.243 caliber) in diameter. His guns were to be used on indoor shooting galleries and even in homes, so they acquired the generic titles gallery guns and parlor guns. As he developed the guns and cartridges, he eventually put a rim on his cartridges so they could be loaded into firearm breeches and extracted after they were fired. The priming compound was in the rim of the cartridge, which was called a rimfire cartridge.

In 1857, the Smith & Wesson company created a .22-caliber rimfire cartridge that had 4 grains of gunpowder (black powder) in the case with the priming compound. It gave a boost to the projectile’s velocity, so this cartridge was able to shoot a 29-grain conical lead bullet. It was called the .22 rimfire cartridge until 1871, when the introduction of the .22 long cartridge forced manufacturers to add the adjective “short” to its name. The .22 short is considered by many to be the first modern self-contained cartridge.

Airguns are being developed, too
At this same time (1840-1880), smallbore airguns were also being produced. They mostly shot darts; but as time passed, they began to shoot a small conical projectile that had a lead nose and a felt tail — the so-called “felted” slug. Other small projectiles (cat slugs, burred slugs) were also made at this time, but darts and round balls continued to be the most popular airgun ammunition through the end of the 19th century.

Zimmerstutzen
In Germany and Switzerland, shooters were taking the parlor guns with their percussion caps and balls in a completely different direction. I’m referring to the zimmerstutzen rifle. These were the 10-meter rifles of the 19th century, capable of accuracy that wasn’t surpassed until the advent of the FWB 150/300 in the 1960s. One curious thing that happened with these zimmerstutzen rifles was the size of the ball was reduced from 6mm and .22 caliber to 4.5mm for increased velocity. Actually, zimmerstutzen rifles came in a rainbow of different calibers, but the most popular ranged from 4.3mm to 4.5mm. Interesting — no? Click here to read an article I wrote about zimmerstutzens. 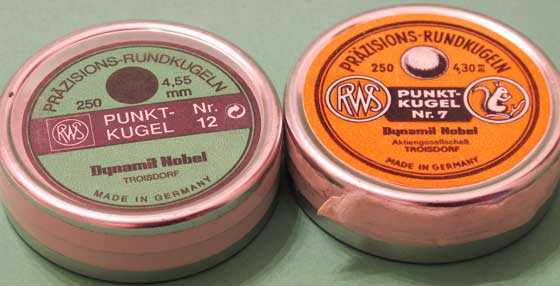 Zimmerstutzens are still being shot today. RWS supplies many of the over 20 calibers of precision balls.

Birmingham, England, 1905
Up to 1905, most smallbore airguns were weak smoothbores that shot with fair accuracy at very close range. Only the specialized dart guns were accurate beyond about 25 feet. But in that year, the world’s first modern air rifle was created by the Birmingham Small Arms company (BSA) of Birmingham, England. That underlever taploading air rifle, called “H The Lincoln,” was able to shoot accurately out to 50 feet and beyond because it was rifled. Just as the percussion cap revolutionized the world of firearms back in the early 1800s, the BSA air rifle did the same for smallbore airguns in 1905. 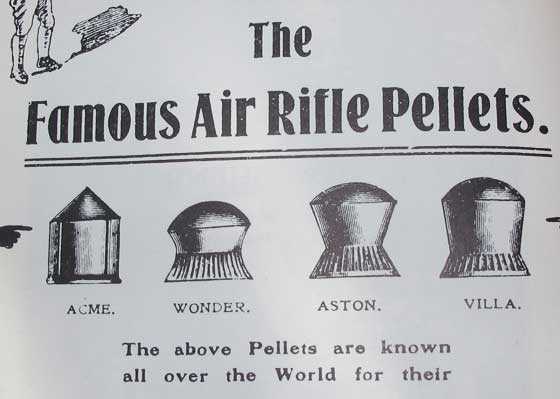 Ad from the 1907 book, The Complete Air-Gunner, by R.B. Townshend. The slug on the left is a burred slug.

What this means
Joe — the .177-caliber pellet was based on a size of round ball being used by the Germans and Swiss in their zimmerstutzen rifles. The .22 caliber was made popular because of the popularity of the .22 rimfire that, by the start of the 20th century, was as popular as it remains today. And I haven’t got a clue where the .25-caliber pellet came from — except that it was already being used in smoothbore airguns like the Gem-type guns.

The round lead balls morphed into felted slugs and burred slugs and finally into diabolo (wasp-waisted) pellets from about the 1880s through 1910. And the most important thing is that they worked! With a BSA air rifle shooting a diabolo pellet, it was possible to put 5 shots into one inch at 50 feet. And in 1907, author R.B. Townshend was talking about how shooting an air rifle at 50 yards was the equivalent of shooting a firearm at 800 yards. We still talk like that today. Don’t we?

There’s no magic surrounding .177 caliber. But the depth to which it has embedded itself into the world of airguns makes it a tough act to follow — or to recreate. It would be like trying to convince people the internet isn’t the best electronic information environment, and they should all subscribe to something different that’s just been invented. 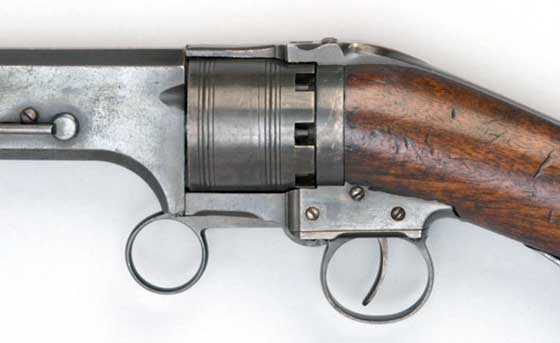 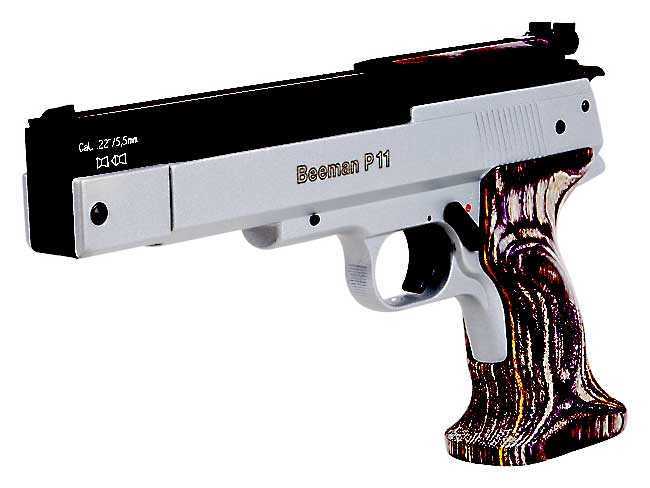