Introduction to the CZ P-09
Today, we’ll start looking at the CZ P-09 Duty BB and pellet pistol imported by ASG (Action Sport Games). Edith and I saw this pistol at the 2015 SHOT Show and the folks at ASG were very excited about it. When I researched the firearm, I discovered why. Apparently, the CZ P-09 pistol took the firearm world by storm in 2014. It’s an improved version of the P-07, which was well-received in 2009. The P-09 is a 9mm semiautomatic that holds 19+1 rounds. And it’s a polymer-framed pistol that has an exposed hammer — not something you see that often in these days of striker-fired weapons.

Shoots BBs and pellets
I think I may have mentioned my feelings about the older CZ 75 that became an instant icon not too long ago. I have one of those coming to test for you, as well. But, I think you’re going to enjoy this P-09 a lot. For starters, it shoots both BBs and pellets through a rifled barrel. So, I’ll be putting it to the test when it comes to accuracy. A $90 price tag assures me that if the gun is accurate, we have another significant pellet pistol on our hands. And this one’s made in Japan.

The year of the airgun
ASG is a Danish-based world supplier of airsoft guns. We were told by ASG representatives Bob Collins, Andy Yoshida and Bob Li that 2015 is the year ASG is concentrating on making their mark in the airgun marketplace. They showed us the incredibly realistic Dan Wesson BB revolver I mentioned in the SHOT Show report and hope to test for you later this year.

But they were just as excited about this P-09 that has apparently been as well-received received by airgunners as the firearm was by the powder-burning trade. Edith tells me Pyramyd Air has had the pistol in inventory for a while, but it’s new to me, so let’s take a look.

Big pistol!
The pistol is big! It has to be, to hold 19 9mm cartridges in the magazine. The pellet gun has two circular 8-round clips on either end of a stick magazine, so it holds 16 BBs or pellets. The BBs are held in the clips by a magnet. The pellets are held by ridges in the sides of the individual ammo chambers. So, it’s possible to load BBs and pellets side-by-side, though I can’t think of a reason why you would. The point is that you don’t need to worry about special dedicated clips. Everything fits!

The pistol is black all over with a metal slide and trigger and a polymer frame. That’s just like the firearm. The slide blows back and cocks the exposed hammer when the gun fires, so there’s a sense of recoil.

The CO2 cartridge fits into a special compartment under the backstrap. It’s not a part of the magazine, so extra magazines are more affordable. 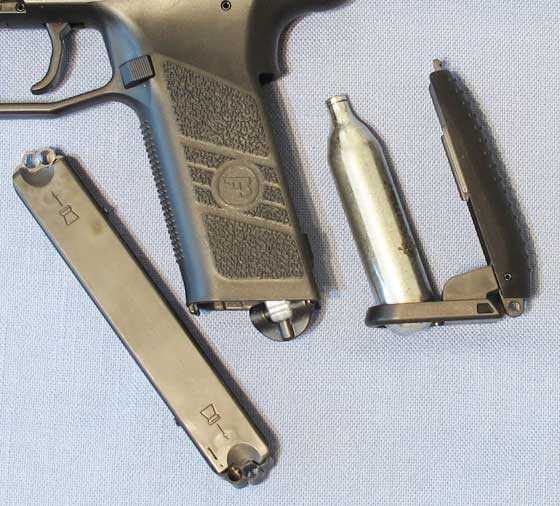 Stick mag has an 8-round clip on each end. CO2 fits in a separate compartment under the backstrap.

The P-09 firearm comes with small, medium and large backstraps. The pellet/BB pistol comes with the one on the gun and nothing more. I find the gun large in my hand, but not as wide as most double-stack pistols. The sveldt-ness of the CZ 75 lingers in this big pistol.

The air pistol weighs 1.6 lbs., which is just a little less than the 1.85 lbs. of the firearm. Polymer is the reason for the light weight.

The sights are low combat-style with 1 dot in the front post and 2 in the rear. They’re not adjustable, although the rear sight does appear to be mounted in a dovetail. But it’s plastic, and I don’t see any way of snugging it in place if it were to move, so I assume it stays put. The manual doesn’t address sight adjustment.

There’s a Picatinny rail at the front of the frame under the slide. It’s perfect for mounting a laser or flashlight. If this were a firearm, I would definitely mount the laser. Because it’s a pellet gun, I think a compact flashlight might do just as well.

Safety almost ambidextrous
The safety is almost ambidextrous (a switch on either side of the slide), except that there’s a button on the left side only that has to be pushed in to take the safety off. I’m certain the firearm does not have this button, because it forces the shooter to use 2 hands to take off the safety. The Duty is a law enforcement sidearm, and I doubt they would accept anything but one-hand operation. 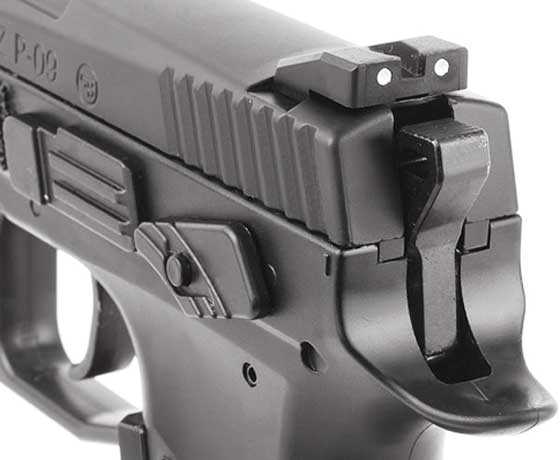 The safety is ambidextrous, but the button that unlocks it is found only on the left side of the slide. Push it in to release the safety.

The mag release button and safety both function, but the slide hold-open lever is simply cast into the gun’s polymer frame. Also, I don’t think this is an air pistol that can be easily disassembled.

Trigger
The CZ P-09 firearm has a trigger called the Omega trigger system that all the reports praise. The single-action pull runs 3-3.5 lbs, which is the same as my Wilson Combat 1911, and the double-action pull is just 9.5 lbs. I found the air pistol’s trigger to have a little creep in single-stage operation when the gun first came out of the box, but that went away with just a few pulls. I’ll weigh it for you in both modes when I report on velocity in Part 2.

ASG rates the pistol at 492 f.p.s. with .33 gram (5.1-grain) projectiles, which are probably steel BBs. Pyramyd Air conducted their own tests and found the gun shoots 5.1-grain pellets at 412 f.p.s. and steel BBs that also weigh 5.1 grains at 390 f.p.s. Naturally, I will test several of each for you.

Summary
We may have an exciting air pistol to look at here. I read in the reviews that some owners feel this pistol is accurate. It’s been a while since we’ve tested an accurate repeating pellet pistol, and I’m up for another one. Of course, it wouldn’t hurt if it also shot BBs well. We’ll see!