This is Part 1 because there is are additional parts planned. I have wanted to write this report for many years, which will come out as the story unfolds.

Mention interesting gun design to anyone 60 years and younger and sooner or later the AR-15/M16 will enter into the discussion. They’ll call it the Mattel-o-Matic and other derogatory terms. It deserves much of that derision, not because of the gun’s design, but because of the unsuccessful way in which it was launched. It was tested in just a cursory way and then quickly modified and shoved out the door to satisfy political pressure. It was proven (field tested) in battle, where tens of thousands of soldiers, sailors, airmen and marines paid a very high price for the shortcomings of the initial design. In the half-century since that time the design has evolved into something robust, reliable and very adaptive.

I don’t want to talk about that platform today. I want to start the discussion by talking about the M1 Carbine. This is a rifle that was designed in record time (through competition that the M16 never had) and the produced in record numbers (over 6 million) in a few years by 10 prime contractors and hundreds of subcontractors. The production program was a model of logistical achievement, as parts were shipped around the country so that each gun would be as alike the others as was possible under the time constraints of that day. The only prime contractor who failed to deliver a gun was actually a gun contractor — Irwin Pederson Arms Company — whose contract was terminated and given to a division of General Motors to complete.

The M1 Carbine was one of the most advanced development programs of WW II. Not only was technology pushed, the big news was how advanced the program management was.

The M1 Carbine was decades ahead of its time. Even today the gun industry does not build guns as lightweight and compact as the Carbine that have so much firepower. But that’s not what I want to talk about, either.

What I want to talk about was a sub-project within the Carbine program. The Army was trying to make gun parts through investment casting! They had a material they called ArmaSteel that flowed well and could cast parts to tolerances so accurately that many of the machining steps did not have to be done. That saved hours of manufacturing time, and would have sped up the Carbine production significantly. The only problem was, the parts made this way could not stand up to the gun’s operation. They broke under fire.

To their credit, the Carbine program managers never released any ArmaSteel parts to troops in the field. They continued to test the parts at the arsenals and proving grounds and let the soldiers have the guns made by proven conventional production methods. ArmaSteel was used for other applications where it did work well, so the project was not a failure. They just weren’t able to make guns with it.

Investment casting eventually did get perfected for firearms and Ruger has a large state-of-the-art production casting facility in New Hampshire called Pine Tree Castings. Today things like sintered parts and Metal Injection Molding (MIM) are hot items in the world of gun production, and, while there are still areas where improvements have to be made, the process of casting steel parts has advanced very far. The M1 Carbine program would have benefitted greatly from today’s technology.

Now let’s look at another firearm development project. This one had an unusual problem — a supply that could not be met!

The term Swedish Steel is known the world over. It means some of the best steel obtainable. In 1894 the Swedes adopted the Mauser rifle design for their own use and built some of the finest bolt action battle rifles the world had ever seen. In fact, when they contracted with Mauser of Germany build their rifles, they specified that Swedish steel had to be used. The Germans dedicated a building they called the Swedish building to the contract. German steel wasn’t able to perform as well as the steel the Swedes supplied.

In 1898, however, the Germans leapfrogged past the 1896 Swedish Mauser with their own model 1898 — a design that is still in commercial production today. It is even stronger than the Swedish rifle, and has endured the test of time.

Our tale does not deal with the Swedish Mauser, though. It looks, instead, at a sidearm the Swedes were forced to make because all their supplies of reliable sidearms were cut short by World War II. The Swedes thought that WW I was the last war that would ever be fought, so they were caught without a lot of military capability when WW II dawned. Initially they purchased a number of pistols from Germany, but when the war began, Germany stopped selling arms and the Swedes had to look elsewhere. They considered building the German pistol that became the P38 under license in Sweden, but when they studied the design it was found to be too complex.

They were also familiar with the 9mm Finnish Lahti M35 pistol and thought highly of it, so they adapted it for their own manufacture in a simplified form they called the M40. This pistol has the same ergonomic shape as the P08 we Americans call the German Luger, but put the 2 guns side by side and the M40 Lahti is much bigger. It is also quite a handful to hold. The Swedish soldiers who carried one called it “the iron stove” — a nickname that would translate to “boat anchor” in the U.S. 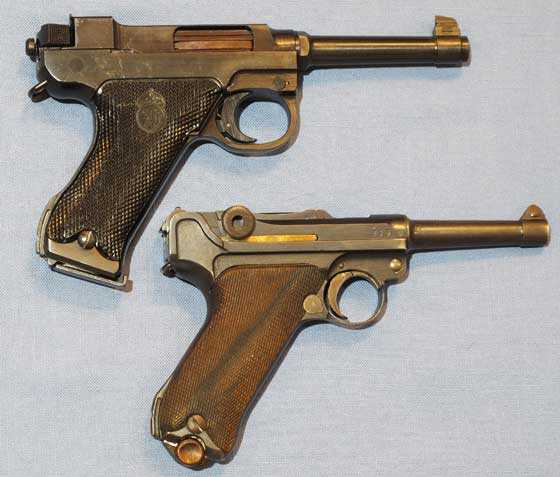 Swedish M40 Lahti pistol above a German Luger. The Lahti is much larger and heavier than the Luger. 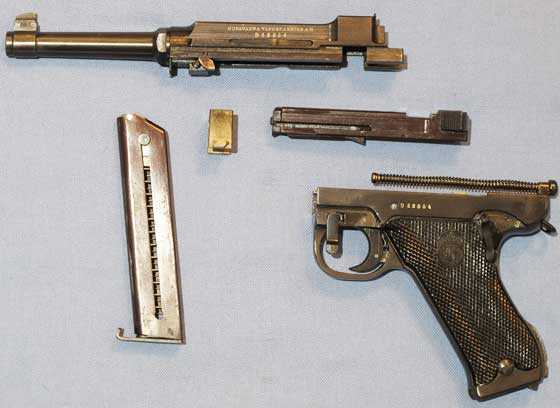 The Lahti M40 pistol is very simple and quick to disassemble.

There are a couple interesting things about the M40. The first is that the Swedes, who are recognized for making the finest steel in the world, had to put much weaker steel into this gun. They simply didn’t have enough of the good stuff to go around. The metal they used was a molybdenum steel alloy that was used for the bolt and slide and other critical parts. It barely worked for the gun when standard 9mm pistol ammunition was used, but often cracked when high-pressure submachine gun ammo was used. Europeans have lots of 9mm guns and not a lot of thought was given to which kind of ammo was issued and used — until the bolts and slides started cracking.

Of course when this was discovered the word went out to use pistol ammo, only, in this handgun. They didn’t have enough of the right kind of steel to change the specification with the war going on. Anyone who buys an M40 today should examine the bolt and slide for cracks.

The other thing that’s curious about the M40 is the bolt accelerator. The Swedes were concerned about their cold weather affecting the gun’s operation. It is a semiautomatic, after all. So they continued to use the bolt accelerator that Lahti designed into the original M35 pistol. The accelerator gives an extra push to the bolt to ensure that it goes all the way back when the gun fires. But the accelerator made the bolt cracking problem even worse — to the point that many pistols had their accelerators removed. 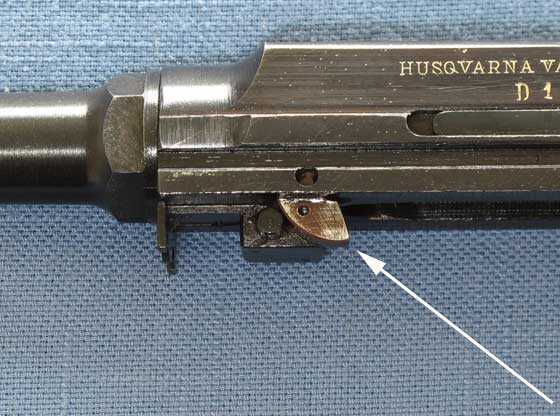 The bolt accelerator (arrow) is a lever that strikes the frame of the gun as the slide moves back in recoil. When it hits the frame, it pushes the bolt back with additional force.

The Swedes had examined the U.S. M1911A1 pistol, but rejected it because it didn’t have a bolt accelerator. They felt it wouldn’t be reliable in their cold weather. This, despite their neighbors’, the Nowegians, experience with the 1911 that was very satisfactory in extreme cold. You just lubricate the parts less!

Please understand that I am not condeming anyone. I am simply explaining the subtleties that can happen during a weapon’s design. It’s easy to sit on the sidelines and criticize those who are tasked with building something. It’s far more difficult to get the work done and the product out the door.

I know today’s report was all about firearms, but I wanted to get you thinking about gun designs before I start talking about airguns. It’s also easy to trash-talk the M16, but the truth is, history is replete with stories about failed gun designs — designs like the French Chauchat (pronounced show-shah) machine rifle of World War 1 and the Gyrojet pistol of the 1960s.

The point is that people who design weapons (and airguns) need to also try to use their guns in realistic conditions. Test programs need to be rigorous for military arms, and they need to be thorough for sporting firearms and airguns.

The next part of this report will be about some airguns many of you have never heard of. And I won’t be looking at poor design. Just the opposite. I’ll be looking at a design that works very well, but was never given the chance to succeed. Because of a quirk of fate, I was never able to formally test and report on this design during the brief time it was available. It’s an interesting story and one I have waited 5 years to tell.