The Pelletgage comes in .177 caliber at present. The holes are in a steel plate. A plastic plate above the gage plate helps guide the pellet head to the gage hole.

Introduction to the Pelletgage

The Pelletgage is a precision tool that lets you measure the pellet head sizes. The device is a metal plate with graduated holes that accept or reject pellet heads. If a hole accepts a head, the pellet falls through and will usually be caught on the skirt that’s wider than the head. The holes range in size from 4.47mm to 4.56mm.

The Pelletgage does not change the size of the pellet. That is not its function. It measures the pellet head size so you can be sure they’re consistent. 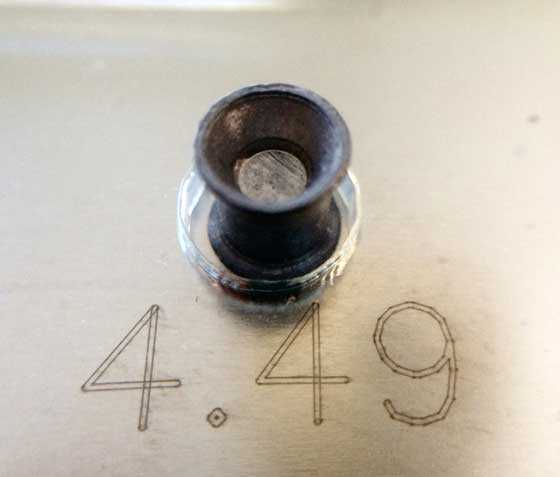 This pellet’s head is larger than 4.49mm. Photo provided by Pelletgage. 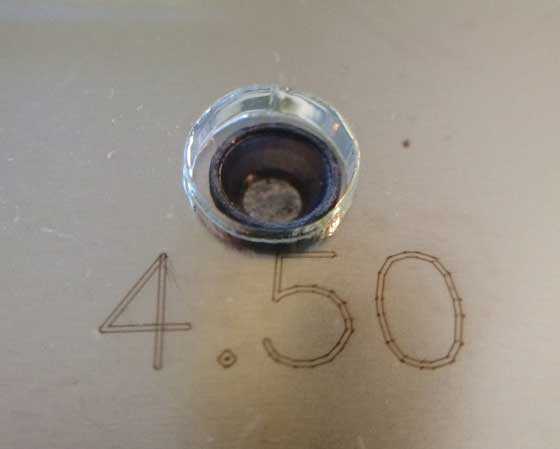 This pellet’s head (same pellet as above) is 4.50mm. Photo provided by Pelletgage.

You drop the pellet head-first into the hole you wish to use. The instrument has a plastic plate above the precision steel gage plate to help guide the pellet head. If the head drops through the hole in the steel gage plate, you know that the pellet head has got to be smaller than that hole. I start with a small hole and work up. For instance, if I’m measuring a pellet that’s supposed to have a 4.51mm head, I’ll start with the 4.50mm hole. If the head doesn’t drop through, I move up to larger holes until it does. The first hole it drops through is the head size.

If I don’t know the head size of my pellet, I start small and gradually increase until I find it. For example, I discovered that .177 RWS Superdome pellets have 4.51mm heads, according to my gauge. And I also found they’re very uniform. I measured 10 pellets for this report, and all 10 failed to pass through the 4.50mm hole but did pass through the 4.51mm hole.

You might think that will happen with every pellet, so I also tested H&N Baracuda Match pellets that are supposed to have 4.52mm heads. They were also very uniform, but the gage measured their heads at 4.54mm instead of 4.52mm. More on that in a moment. 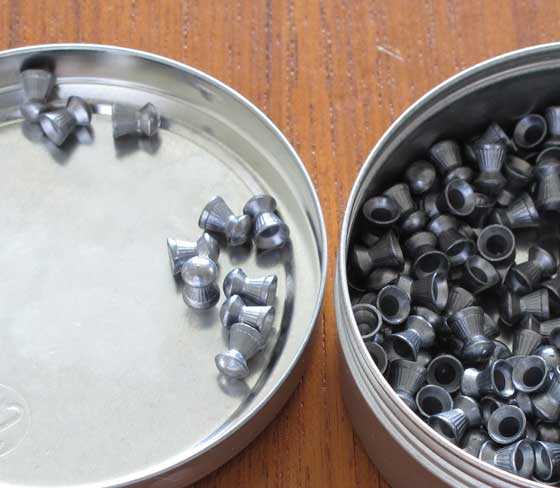 I gaged 10 RWS Superdome pellets and they all had 4.51mm heads. That’s uniformity.

When I gaged 10 Beeman Devastator pellets, they had 3 different-sized heads. None of them had a 4.52mm head. This variation is much larger than I would have suspected before using the Pelletgage.

How can the Pelletgage be used?

1. Sorting pellets by head size. We know that pellet head sizes affect accuracy, so sort them with the Pelletgage to find pellets with the same size head. Yes, some tins say the pellets inside have heads that are all one size, but with the Pelletgage you’ll know for sure. Combine this with sorting each pellet by weight. Think this is going too far? I can tell you with certainty that this is exactly what the champions will do. Those who don’t do things like this are usually the also-rans.

2. Finding the head sizes of pellets whose sizes are not marked on their containers. I have already done this with RWS Superdomes mentioned above, and now know they have heads that measure 4.51mm — according to my gage. If you have an airgun that prefers pellets with certain-sized heads, the gage is a way to discover potental candidates without shooting every pellet in your inventory.

3. Verifying the head size that’s marked on the tin. I’ve already told you I have H&N Baracuda Match pellets whose heads are supposed to be 4.52mm. The gage says they’re 4.54mm. It also says their heads are very uniform. Okay, I know that my gage doesn’t agree with the head size measurements from H&N. That really doesn’t matter to me, but it’s nice to know. Is the gage off a bit? Maybe so, but is it off as much as 0.02mm? Probably not, as you’ll shortly discover. The equipment that was used to make the gage is far more precise than that. I will just tuck that piece of information in my head for now and see if it ever becomes important.

4. Comparing one tin of pellets to another tin of the same pellets. As pellets are made, the dies that swage them wear. Eventually, the die cavities open up and the dimensions of the pellets change. Do the pellets in the tin you just bought have the same size heads as the pellets you bought a year ago? The Pelletgage will tell you.

How accurate is the Pelletgage?

Accuracy in a precision measuring tool is always a concern. First of all, let me address those who believe they can measure pellet heads with a micrometer or a caliper. No, you can’t. Those tools do not have the ability to find the exact chord (the diameter of a circle — its widest point) of the small pellet head each and every time. The pellets can tip in their jaws and the jaws can also hit the rims of the pellet heads off the mark of the true chord by a few degrees, measuring something less than the full diameter.

These measuring instruments also close their jaws with some force that can too easily flatten thin diameters of soft lead pellet heads. I admit the latter is not a great concern for a machinist who measures things with precision all the time, but it’s a concern for the amateur who isn’t that familiar with measuring things.

The former — finding the exact chord of a small thin circle of soft lead — is hard no matter who you are or what you do for a living. The Pelletgage eliminates the need for finding the chord.

I can tell you that the Pelletgage is manufactured with a diode-pumped fiber laser using oxygen process gas to produce cuts that are very smooth. This laser cuts to an accuracy of better than 10 microns (one micron is one-millionth of a meter and one-thousandth of a millimeter) with repeatability. Still, the Pelletgage maker, Jerry Cupples, is concerned with the accuracy of the finished gages.

Now I’ll address those things I mentioned earlier, but postponed discussing. Am I concerned that my gage’s measurement of a 4.54mm head for the H&N Baracuda Match pellet disagrees with the H&N labeling of 4.52mm? Not to me, it isn’t. What would concern me is if I got pellets with 3 different head sizes from that tin. The fact that my gage doesn’t agree with H&N’s size labeling is of no concern to me.

So, my results with measuring the H&N Baracuda Match pellets doesn’t bother me. What bothers me is the fact that Beeman Devastator pellets came from one tin with 3 different head sizes that spanned 0.04 millimeters.

There is a technique to measuring

We’re talking about such small tolerances that the pellets do not automatically fall into the gage holes — even with the clear plastic guide holes. A technique has to be employed. I had to wobble the pellet around the gage hole lightly to get it to line up. I worried about wearing the edge of the pellets’ heads by doing this, but I used an extremely soft touch. I don’t know if I caused any wear, but I was able to take a pellet of a known size back to the gage repeatedly, and it never measured any smaller from wear to the edge of its head. So, I think I’m doing it right. Time will tell.

Is the Pelletgage necessary?

You’ve lived this long without one. How necessary is the Pelletgage? If you’re a plinker who’s content to reach into a tin of pellets and pull out the next one for your gun — kinda like me — then you don’t need a Pelletgage. If you’re a field target competitor who hopes to win a match, this might be something to consider. If you’re a 10-meter competitor who shoots in national competition like I used to, then you almost have to check out this instrument.

We’re just starting to know this tool, so its importance cannot be accurately estimated at this time. I can make a case for this being the most important advancement in airgunning in the past decade, and I can also make the case that this tool is not required. Until I have a chance to test it thoroughly and learn what its benefits are, I won’t know anything.

I can see vast potential for precision with this gage. I almost hope it doesn’t turn out that way, though, because it would muddle so much of the testing work I’ve done to this point in time. My guess is the Pelletgage will end up being somewhere in the middle. It will make a difference for some kinds of shooting, but not for all of them. There will be some folks who will swear by it and other folks who won’t give it a second thought. I plan to test the Pelltgage to find out who those folks should be.

I need to find ways of testing this gage. While that might sound straightforward, I assure you it isn’t. I’m working on a test plan at this time and welcome your thoughts and input.

Where to get a Pellegage

You can get a Pelletgage at Pelletgage.com. There will be a .22-caliber Pelletgage coming soon.