This is a comprehensive report of the early history of the BB gun. The first successful BB gun is thought to be the Markham. It was made in 1886 in Plymouth, Michigan by the Markham Air Rifle Company. The gun was mostly wood with just a few metal parts where they were absolutely needed — such as the mainspring, trigger, barrel, barrel hinge and other assorted small parts. It looked a little like a gun overall, but the shape was fatter all around because of the wooden parts.

Markham BB gun was made of wood with a few metal parts. This is a later 1888 model, but the early guns looked similar.

The gun was cocked by breaking the barrel down. A heavy wire connected to the barrel pushed the plunger ( a wire with a round airtight seal at the front — it was an early form of piston) back until it was caught by the trigger, whose end served as the sear. A coiled steel spring located below the piston was now stretched and ready to pull the piston forward violently when released by the sear. The plunger compressed the air in front of it as it went, but the air was blocked by a small lead ball that was loaded in the breech end of the barrel. When the pressure built high enough, the ball’s friction was overcome and it took off down the smooth metal barrel concealed inside a brown wood shroud. 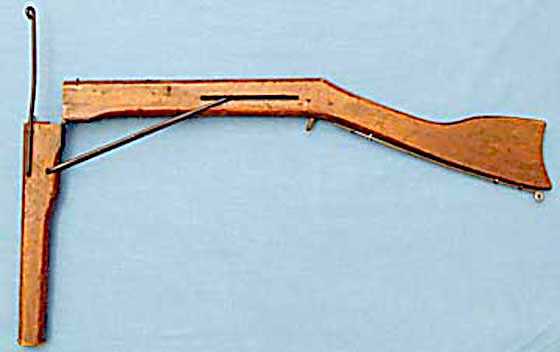 Markham BB gun broke open like this when cocked. 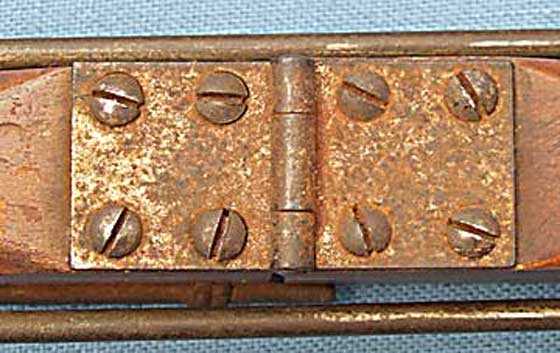 A furniture hinge held the barrel to the rest of the gun.

The Markham used easy-to-find lead birdshot (shotgun shot) for projectiles. They standardized on the shot size BB — there was also a size B and a size BBB. BB shot measures 0.180-inches in diameter, nominally.

Across the street from Markham, The Plymouth Iron Windmill Company was making and selling iron windmills to farmers to run their water pumps. These windmills were expensive and difficult to sell, so the company looked for other products that might keep them going. One day a local firearm inventor named Clarence Hamilton, who is better known for the several youth .22 rimfire rifles he designed and produced, brought in a small gun to show to the Iron Windmill president, Lewis Cass Hough. He cocked it, then dropped a lead BB shot down the muzzle and shot it into a wastepaper basket. Hough was impressed and shot the gun several times himself. When he was finished he is reported to have said, “Clarence, that’s a Daisy!” In the vernacular of the day he was saying the gun was fantastic.

The first Daisy BB gun was all metal. This is a working replica Daisy produced in 2005.

The story has arisen that the windmill company made guns to give away as premiums with the purchase of iron windmills, but advanced BB gun collector Wes Powers thinks that’s a stretch. According to him, there is no proof that was ever done. The company was simply looking for additional products they could make to improve their business, and with the Markham BB gun doing so well across the street, this gun seemed like a good way to go. Whatever the case, they made their first gun is late 1887 and started selling in early 1888.

The name Daisy first appeared on the gun after a few were made with just the name Plymouth Iron Windmill Company cast into the top iron cocking handle. But the Daisy name stuck. In 1895 the company reorganized as the Daisy Manufacturing Company and they were off to the races.

As far as most people know, Daisy was the only game going, but in fact it was more of a race among dozens of startup companies to make and sell BB guns. Michigan was the epicenter, but guns were made in other regions and states as well. While the competition was very heated for several decades, Daisy advertised heavily and also pursued sales to stores through aggressive traveling salesmen. The others relied on word of mouth and eventually they went away — except for Markham. Daisy quietly took over control in 1916 and used Markham as a cheaper line they could sell through different distribution channels like Sears. They renamed the company the King Air Rifle Company in the 1920s and Daisy officials started to populate their executive staff and board of directors.

Daisy was the major player in the BB gun world by the first decade of the 20th century. In that capacity, they were able to prevail on the makers of lead shot to produce a ball that measured 0.175-inches in diameter. There were several advantages to this smaller shot. First, it was lighter, so it went faster than the old BB shot. That meant BB guns could have weaker mainspring and still achieve the same velocity as before. Weaker springs meant the guns became easier to cock — a very significant advantage! The smaller shot also used less lead that saved money when millions of them were made. Daisy wasn’t making shot at the time, but they would begin in a few years.

They named this new ammunition air rifle shot to differentiate it from BB shot, and it occupied a unique place in the spectrum of shot. No equivalent shotgun shot was made in this size, so the BB gun — ironically no longer shooting BBs — separated itself from the world of birdshot at this juncture. It also lead to the serendipitous invention of the steel BB — or air rifle shot, as it should be called. I will continue to call this shot BBs, to avoid confusion.

Before long, the new smaller shot tubes began to be returned to Daisy for repairs! The faulty shot tubes (that were actually the barrels) were split and had one or more steel balls stuck in them. Cass Hough, the grandson of the founder, traced these problem guns to Minneapolis, where he discovered that the American Ball Company — a maker of ball bearings — was packaging its scrap balls of the appropriate size into small tubes and selling them as the Bullseye brand of air rifle shot. The problem was these balls were steel, not lead. The shot tubes needed lead balls to function properly, because they depended on the lead squeezing through a constriction in the breech at the instant of firing. Steel balls didn’t deform, and eventually they removed the constriction altogether — ruining the shot tube. American Ball was also not controlling the size of the balls closely enough, which lead to the jams and split shot tubes.

Daisy tried telling its customers that only lead air rifle shot would work in their guns, but the steel shot was cheaper and it was a losing battle. So Daisy redesigned their shot tubes to accommodate steel shot and worked out an agreement with American Ball for the continuation of the Bullseye brand with Daisy participation. This happened in 1928 and lasted until 1939, when Daisy acquired American Ball and moved the shot making business in-house. The Bullseye brand name for air rifle shot continued into at least the early 1970s.

You’ll shoot your eye out

When the switch was made from lead shot to steel there was a hidden disadvantage that didn’t surface for several years. When lead shot hits something hard like a rock or a tree at high velocity, it deforms and loses much of its energy. Steel shot doesn’t deform. Steel will rebound from hard surfaces with almost the same velocity that it impacts, and a lot of kids were finding that out the hard way. I have been hit in the face by a steel BB rebounding from a hard surface 33 feet away and my lip was split by the impact. I always wear safety classes whenever I shoot modern BB guns at anything! You should, too.

Daisy suspended BB gun manufacture during the war and switched over to defense projects like the rest of American industry. Cass Hough, who would later lead the company, joined the Army Air Force and became a rather famous fighter pilot. Among other things, he acted as a test pilot and is believed by many to have been the first pilot to break the sound barrier in 1943 in a power dive in a P38 Lightning fighter over England. Supposedly a sonic boom was heard. You don’t hear much about that achievement because propeller planes are not supposed to go that fast and because Chuck Yeager was the first person to do it in level flight in 1947, which is where the record is assigned.

After the war Daisy scrambled to get back to peacetime operations, but shortages of key materials like steel hindered them. Steel BBs were not made for some time after the war, so experiments were made with aluminum BBs. They did not fly straight and were quickly abandoned — making them a rare collectible today.

By the late 1940s Daisy was back in full production and positioned to advance the BB gun for many more decades. This report will end here, but I will return and finish the story of the BB gun at some time in the future. 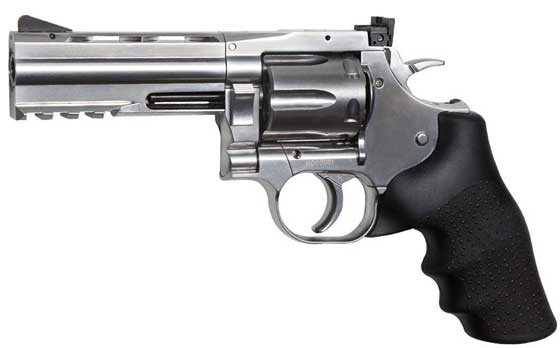