That title is certain to anger both Springfield Armory and Glock. But it’s what many gun writers have said. From the trigger that has the built-in safety lever to the reputation for extreme reliability, the XD-M seems to be close to the Glock in performance. I own a Glock 36 carry gun in .45 ACP, so I will be the judge of that! I can tell you this right now — the grip of the XD-M is less blocky that that of the Glock, making the gun more comfortable to hold for me.

The XD-M has a polymer frame — just like the Glock and many other pistols that are hitting the market these days. Ten years ago I was a troglodyte sitting on the fence, shouting vile epithets at “plastic pistols”. I was like an aging Harley aficionado who hated Japanese bikes with a passion. Never mind they were faster, smoother, cost less and used to have more reliability! I liked good old shaky, leaky American iron! But, unlike the political arena, the facts about polymer pistols soon rose up and shut my mouth. Plastic pistols are more reliable than all-steel M1911s.

Don’t bother defending the slabside to me; I own three of them. But what do I shoot? I shoot my 9mm Sig P365 that’s super-accurate and doesn’t kick much. And I shoot the .45 Glock that is also reasonably accurate and also doesn’t recoil as much as it should for that big caliber. It certainly does not bounce like a conventional 1911.

This BB pistol that copies the firearm also has a polymer frame with a metal slide. And this is where the benefits begin. Because with the air pistol you get three interchangeable backstraps to change how the pistol sits in your hand. It came to me with the medium-high arch installed which made the pistol point high. I installed the lowest arch and it now seems to point straight naturally. By the way, you get  three backstraps with the firearm, as well. 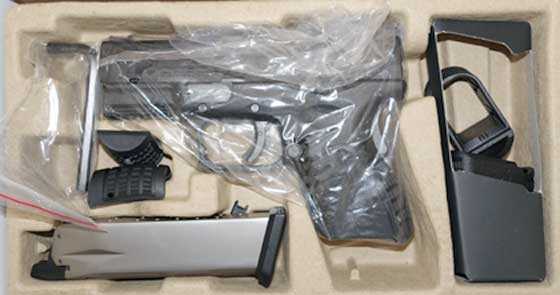 A lot of stuff comes with the XD-M BB pistol! There are three grip extensions on the right and two extra backstraps for the grip. In addition to the magazine you also get a large Allen wrench to pierce the CO2 cartridge. 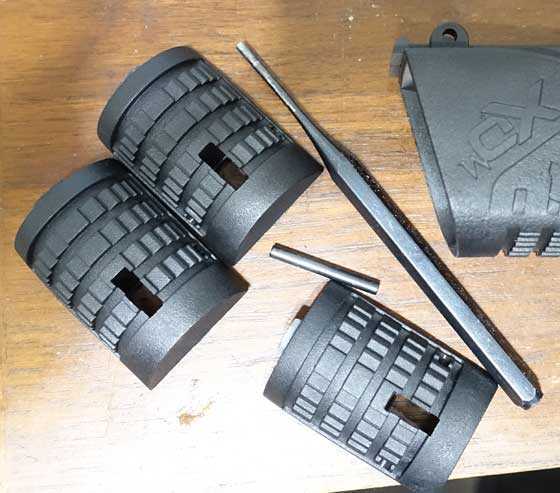 Just press the pin out to change backstraps.

Both the firearm and this BB pistol are striker fired. That means as you fire the pistol and the slide blows back the striker is cocked. There is no follow-up shot if the striker is not cocked. I don’t like that because if a round is chambered and the striker fails to set it off you must cycle the slide for the next shot. That makes this a single-action only pistol. If you want to shoot after the draw the striker must be cocked, so the pistol is carried with the striker cocked and the next round chambered. That’s also characteristic of Glock-type pistols, which is why the second lever is in the center of the trigger blade. Unless it is pulled, the pistol will not fire. It’s considered a safety feature and the manual for this BB gun even calls it the safety. 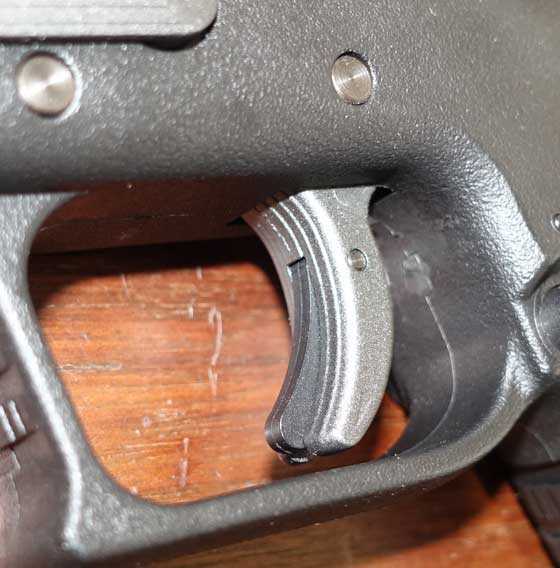 This is a feature Glocks don’t have. John Browning designed the grip safety in 1910 or 11 so the pistol had to be in the hand when the trigger is pulled in order to fire. This is still considered one of the best pistol safety features ever designed. The XD-M has a grip safety and I tested it. It works as it should. So does the trigger safety. Not only does this pistol have all the same safety features as the XD-M firearm, they all work the same! 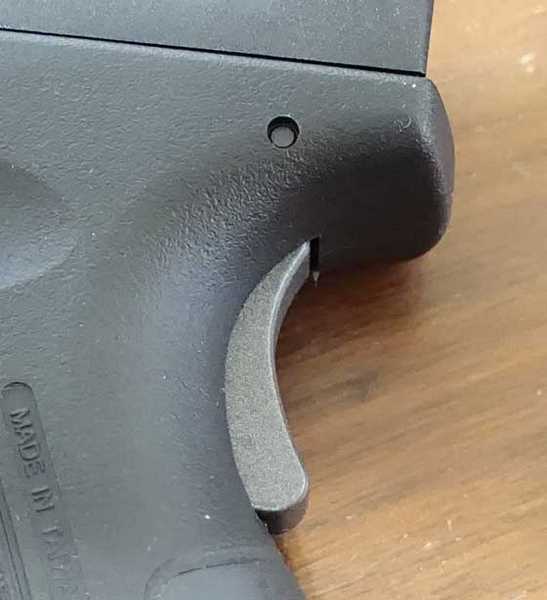 If you don’t hold the pistol the grip safety won’t be pushed in and the gun will not fire. No thinking is needed for this or for the trigger safety.

The compact pistol only also comes with three grip extensions that match the arch of the three grip backstraps. These make the pistol feel full-sized in your hand. The extensions slip over the magazine and do not attach to the pistol in any way. When the magazine is held tight the mag extension will be tight as well.

The sights do not adjust. There is an orange-ish fiberoptic bead in front and a conventional square notch in  back with white dots on either side. Let’s hope they are close to where they need to be!

The BB pistol; field strips just like the firearm. I don’t see the instructions for this anywhere in the owner’s manual and nowhere online do I see them. But the website says you can do it, so here goes.

1. Remove the magazine
2. Lock the slide back
3. Rotate the take-down lever
4. Release the slide and pull it straight forward off the frame (it will be stiff on a new pistol)
5. Compress the slide spring and remove it and the spring guide from the slide
6. Remove the barrel from the slide

Step 6 isn’t straightforward, so I will give you the secret. Push forward on the breech with your thumb and, if the barrel locks up, push lightly up on the slide cover (the part that would open to eject a spent round) with a finger of your other hand. That will raise the breech enough to clear and the barrel will move easily forward. When you do this make sure you are pushing the barrel the right way — forward out of the slide. When the barrel releases (but doesn’t come out of) the slide, pull it backward and down out of the slide. The real inner barrel separates from the outer shroud at this point. 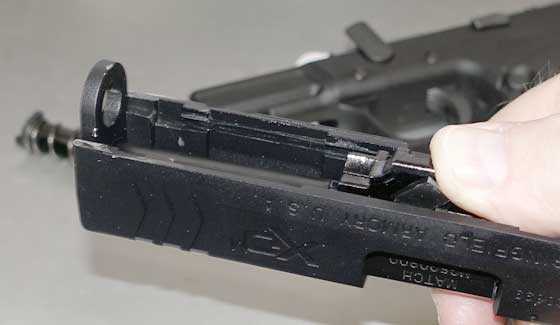 To remove the barrel I’m pushing forward on the breech with my thumb. 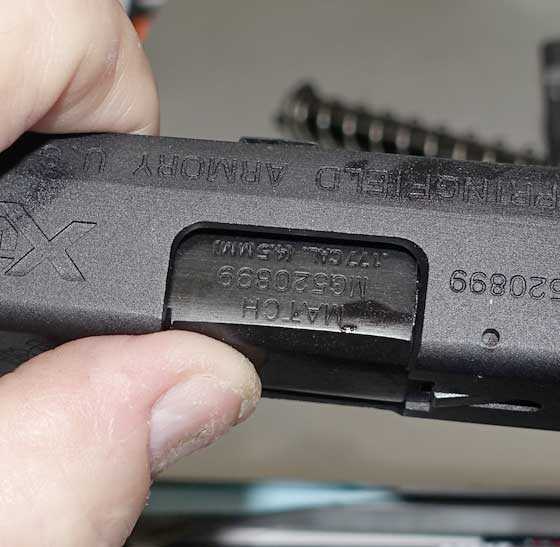 While pushing forward on the breech you may also have to push in lightly right here. That will unlock the barrel from the slide. I have no idea why the barrel says MATCH — ’cause it certainly isn’t! 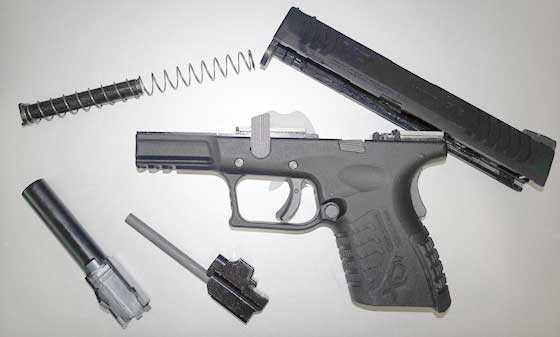 The XD-M doesn’t come apart as fast as a 1911, but it is simple to disassemble as long as you follow my instructions.

I have to comment that the pistol came with a lot of grease on all the moving parts. I get the feeling you are supposed to keep it this way. A lighter grease like lithium would be best, as you don’t want to slow the moving parts. 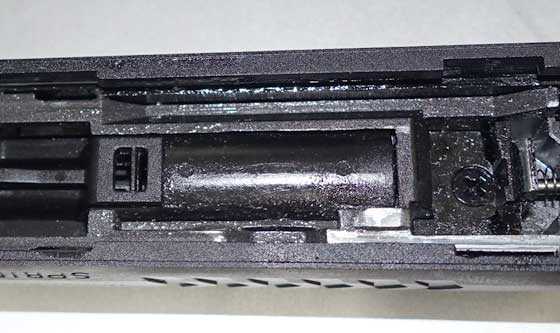 Grease covers every moving part inside the pistol.

Yeah, yeah, yeah — the parts go back together the way they came out. EXCEPT!!!

The one secret to assembly is to first assemble the rear barrel inside the outer barrel (the fake one that looks like a real firearm barrel on the outside). The reason for this is a small pin on the right side of the real barrel breech that has to fit into a machined slot in the fake barrel before the two will fit into the slide as they must. 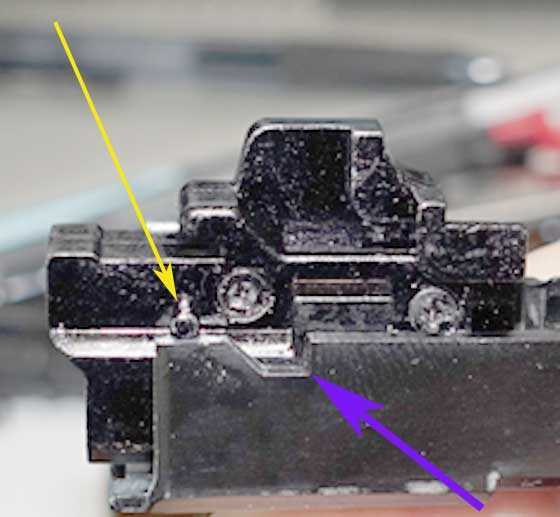 That pin on the real barrel (yellow arrow) has to be down in that notch in the fake barrel (blue arrow) before both barrels will fit into the slide as they must.

The Pyramyd website tells us to expect velocities up to 270 f.p.s. for the compact 3.8-inch barrel. We will see when we test velocity in Part 2.

But wait — there is more! This pistol comes to you with its own holster. And that is realistic, because the firearm comes the same way. Springfield Armory has really put a nice package together with this BB gun! 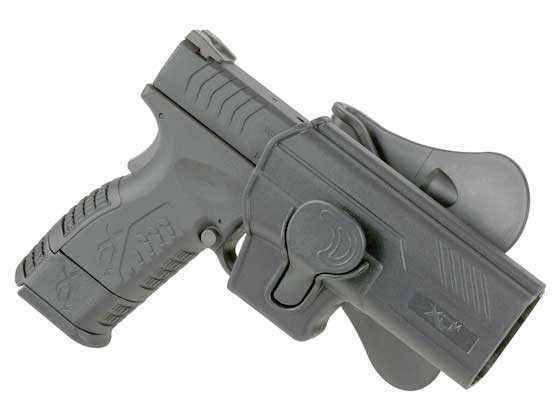 The holster comes with the pistol.

You also get a holster with the pistol. I will test the holster for you. It has a number of features like a quick-release locking button and body-contoured shape. It fits outside the waistband, which means the rear flap goes under your belt.

This is the little BB pistol that keeps on giving. I just hope the accuracy is there. We shall see!