Today I mounted the scope on the Lil’ Duke BB gun and tested the gun for accuracy a second time. This was an interesting test! Read all of it before you form any lasting impressions, because there is a surprise coming at the end.

The scope base comes in the box with the Lil’ Duke. It’s in a plastic bag and the instructions how to attach it to the BB gun are in the owner’s manual. I have used BB-gun scope bases like this before so the the job went quick.

The base itself is plastic and attaches to the gun with a screw in the back and by fitting the front end under the rear sight. The screw comes out from the top of the pistol grip. Remove it, attach the mount and screw it back into the hole. It has machine threads and I could never get it tight with the mount installed.

The plastic scope base attaches with one screw in the rear (left in this photo) and by sliding the front under the rear sight leaf. 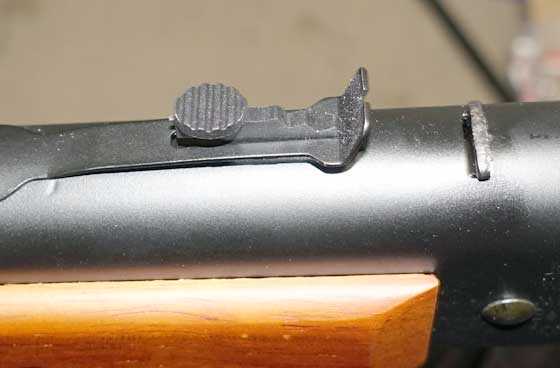 The elevator must be removed to install the scope base.

The elevator has been removed. To install the scope base lift the rear sight leaf and slide the base underneath.

This is the scope base installed. This photo doesn’t show it but the elevator goes back in after the base is under the rear sight. That tightens the base up, but not perfectly.

I could not get the scope base tight on the BB gun no matter what I did. The rear screw would not tighten past a certain point but it was the front part that’s the real issue. With the elevator installed it is fairly tight, but it does still wobble from side to side. That allows the scope to rock side to side. I see no way to tighten it further without damaging the gun. Sure I could epoxy it to the gun, but that’s pretty drastic.

When the scope base was attached to the gun as best it could be I mounted the scope. While the scope base came in the box with the BB gun, the scope and its mounts came in a separate blister package. The scope is 4X15, with a small-diameter tube and comes with the two-piece rings attached. The claws on the base of the rings slide into the 11mm dovetail on the scope base, then a screwdriver tightens them to clamp to the base.

I got them tight in the dovetail, but because of how the base was attached, the scope still rocked from side to side a little. Would there be any accuracy? I felt there could be, because after each rocking the scope seemed to return to the same upright position. The elevator was putting tension on the base to correct the wobble. But shooting was the only way to tell for sure.

I shot from 5 meters using the UTG Monopod as my rest. Today I shot 10-shot groups where I only shot 5 shots with the open sights in part 3. That was just my mistake today, and once things started I followed through that way for the entire test. I shot the same BBs as before, so a direct comparison can be made, except for the number of shots in each group.

I decided to try to sight in from 5 meters, because that is already pretty close to the target. With optical sights I usually get a little closer, but 16 feet isn’t that far. And the first shot landed on paper, low and right.

On the target you are about to see are ten Air Venturi steel BBs in a group, and two sighters a little farther away. I marked the sighters so you can distinguish them from the group. After firing both sighters I adjusted the scope up and to the left. There are no clicks on the adjustments — both adjustment screws just move smoothly. Ten BBs went into a horizontal group that measures 2.385-inches between centers. 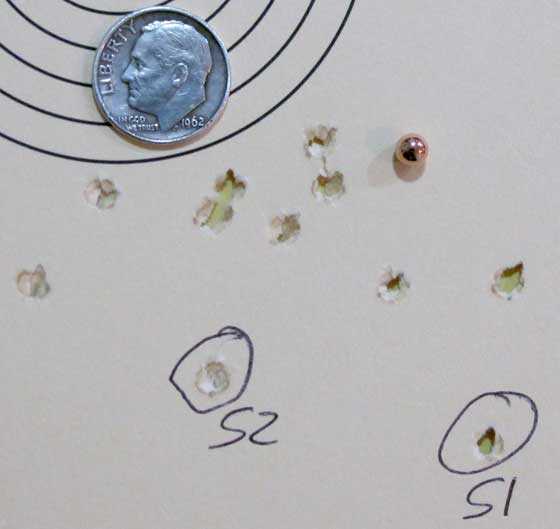 In the Part 3 accuracy test with open sights five of the same BBs went into a 1.644-inch group at the same 5 meters.

After this test I adjusted the scope up and to the left — a lot! The elevation screw came out pretty far.

I also have to say that at 5 meters the image through the scope is fuzzy and out of focus. Maybe it will clear up at 20 yards, but BB guns are not for shooting at 20-yards!

Next up were Hornady Black Diamond BBs. Ten of them went into 1.814-inches at 5 meters. I will say that the first shot is the hole farthest to the right and there are 7 shots in the smaller group you see to the left. But those 7 shots were not shot in succession. I did try one more time to adjust the scope up and to the left after this group. 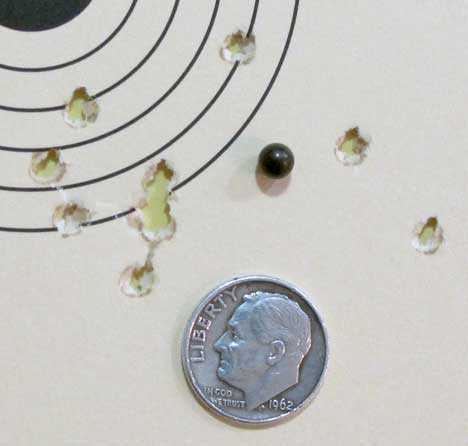 In the Part 3 accuracy test with open sights five of the same BBs went into a 1.005-inch group at the same 5 meters.

The third BBs I loaded were 10 of the Avanti Match Grade Precision Ground Shot. They made a 1.711-inch group at 5 meters. 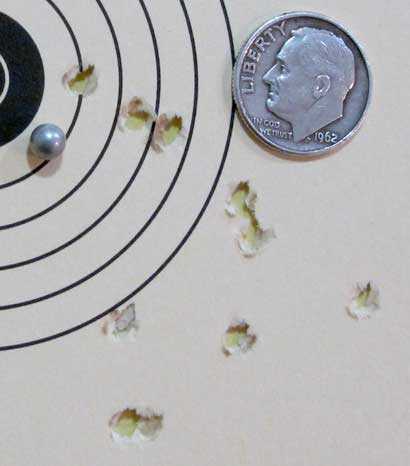 In the Part 3 accuracy test with open sights five of the same BBs went into a 1.136-inch group at the same 5 meters.

Now for the Smart Shot that had been the best BBs in the previous test. Either they would group better than what we have seen so far or that scope mount is letting us down! But they did come through. Ten Smart Shot BBs made a 1.148-inch group at 5 meters. And one of those shots, the one farthest away from the rest, was a called pull. The butt slipped on my shoulder and the muzzle went up just as the gun fired. I called it and, sure enough, it was there on the target. 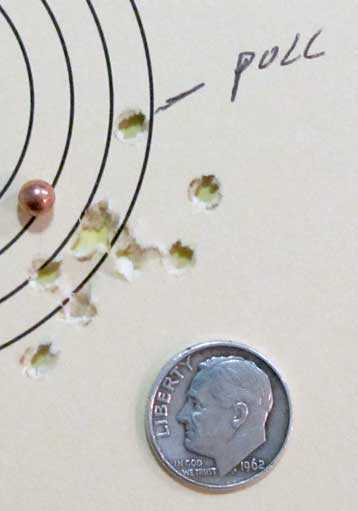 Ten Smart Shot lead BBs went into a 1.148-inch group at 5 meters. I marked the shot that was a pull.

In the Part 3 accuracy test with open sights five of the same BBs went into a 0.763-inch group at the same 5 meters.

This target gave me confidence that the Lil’ Duke was doing okay with the scope. I could not adjust it up enough or to the left enough to get it on the bull, but it seemed very consistent otherwise.

Next up were 10 of the older-style Air Venturi Dust Devils. I was amazed as I watched this group grow! In the end they gave me a 1.147-inch group of 10 at 5 meters. This is the best group of the test! However, it is only best by one thousandth of an inch, which is way beyond the real precision of my measurements. Let’s call this group equal to that of the Smart Shot. 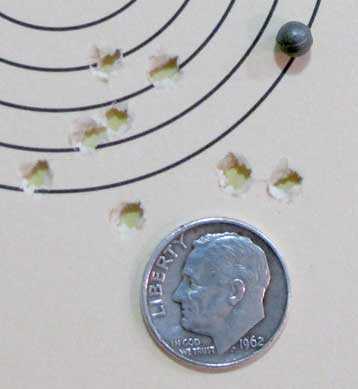 Ten of the old-style Dust Devils went into 1.147-inches at 5 meters.

In the Part 3 accuracy test with open sights five of the same BBs went into a 1.567-inch group at the same 5 meters. So for some reason these BBs did markedly better today. 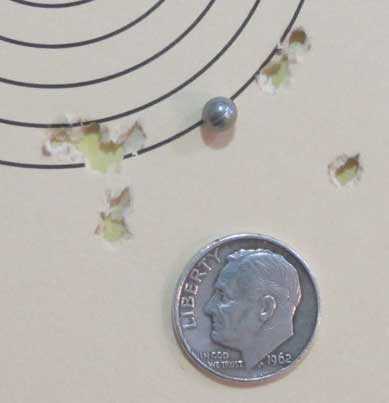 In the Part 3 accuracy test with open sights five of the same BBs went into a 1.348-inch group at the same 5 meters. So here are ten that almost the same distance apart.

I don’t care for the scope and mount on the Lil’ Duke. The scope is hard to see through at BB-gun distances, and there is no good way to adjust it so the gun hits what you shoot at. It also wobbles around too much for me to have any confidence. And, as flimsy as the mount is, I would fear knocking it off zero by just handling the gun.

The Lil’ Duke, on the other hand, is the finest youth BB gun I can remember testing in many years! I think it is a great bargain for its power and accuracy. This is one I recommend. And buy some Smart Shot and Dust Devils while you are at it!

And that is when I did it. I got to the end of editing this report and said to myself — Air Venturi wouldn’t have shipped this gun with a scope base that’s so loose. So I spent another 10 minutes fiddling around and finally got the base almost rock solid. It’s impossible to get a long thin piece of plastic rock solid, but I came very close. And that can only mean one thing.

I’m going to test this gun again — this time with a scope base that I know is solid. It was that group of new Dust Devils that prompted me to experiment with tightening the base. Whenever you have two small groups instead of one there is usually something wrong with your sight. I already did not trust this one, so I played with it some more and got it tight. Now I have to know if that did the trick.

I don’t like scopes on BB guns, but even more I don’t like reports that go out half-baked. We gonna get to the bottom of this one. And I will tell you all the little things I did to tighten up the base. Next time! 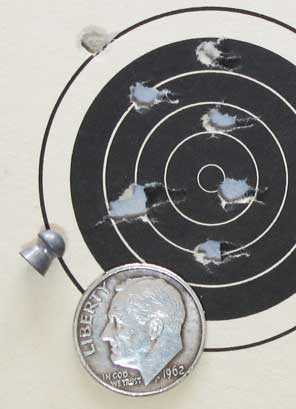