Today is an important report for a couple reasons. Neither of them is good, but both are important for you to learn something about this Sen-X AR-6 Tactical Arrow Repeating Crossbow.

Today I did two things you aren’t supposed to do with a crossbow. One is for sure the wrong thing. I’m not sure about the other thing, but I will present it and let you be the judge.

I’m calling this part the goal rather than the test. I will address the test, but since I did not finish it I will instead tell you what I wanted to do.

I wanted to sight in the AR-6 with the UTG Reflex Micro Dot sight today. So I went about it like I would an airgun, and that may have been one of my mistakes. 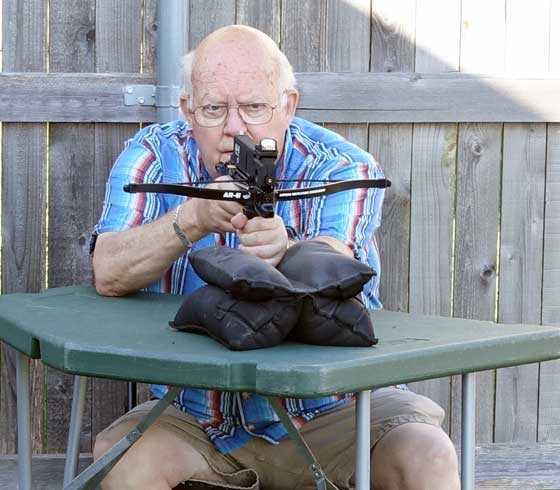 This photo is posed, but this is how I shot the AR-6 for this test. I think you should not do this, for the reasons I will explain below.

You see, when I benchrest an airgun, I use a sandbag to stabilize it. Either the gun is rested directly on the bag or else my hands or arms are. Both ways give some stability to the airgun — be it a rifle or a pistol.

I don’t think the AR-6 should be rested that way! The reason boils down to velocity. A crossbow shoots at a very low velocity compared to an airgun. And this one, the AR-6, is particularly slow.

I have shot my Sub-1 crossbow with a sandbag rest and had no problem, however there were two things that were very different. First, the Sub-1 shoots at 335 f.p.s., while the AR-6 shoots at 220 f.p.s. Any movement that is made while the arrow is still in the launcher affects the flight of the arrow. It does the same for the Sub-1, however, look closely at how I have to hold the AR-6 in the photo above. I have the forward vertical grip in my off hand. Now, compare that to how the Sub-1 is held. 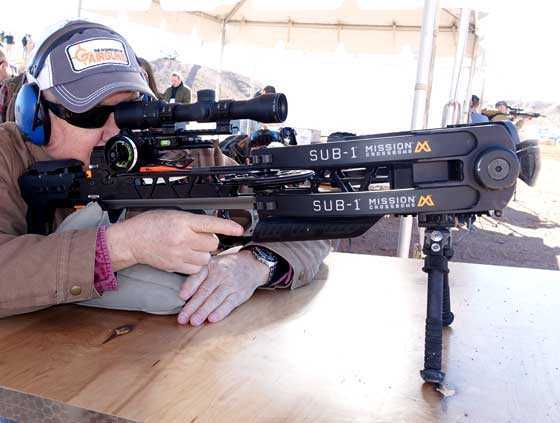 At the SHOT Show I shot the Sub-1 on a bipod and it shot great. 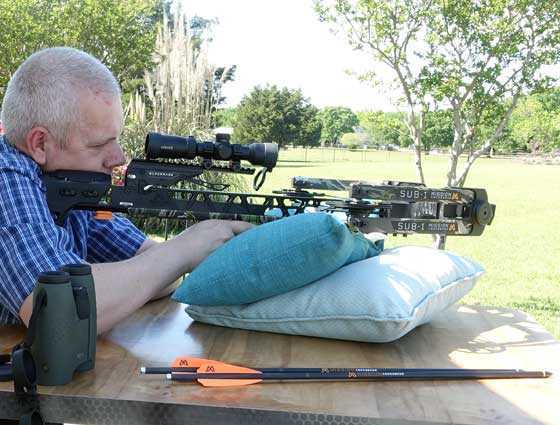 Martin Rutterford of RAW fame shoots the Sub-1 off a bag rest. You can’t see it but his left hand is under the forearm of the bow.

I’m not making excuses for why I shot the way I did today. In fact, I’m not even sure than it had any affect of the shooting. I’m just saying that this was the first time I had rested my off hand on a sandbag while shooting the AR-6 and things did not go as planned.

Do AR-6 arrows need to be fletched?

I told you last time that some of the fletching was coming off my AR-6 arrows. Several readers asked me whether AR-6 arrows even need to be fletched. I was given a link to an article in which an archer describes shooting arrows without fletching.

Then I got an email from Pyramyd Air president, Val Gamerman, telling me he had been told that the fletching on the AR-6 arrows is more for looks than for accuracy. In other words, he had heard the same thing that several readers were telling me.

So another of my goals today was to shoot several arrows without fletching, to see if they were accurate. But none of that is the lesson I learned today.

I made one big mistake today, and this one is for real. There is no doubt. When I started shooting I noticed that the string that’s wrapped around the center of bowstring had come loose and was starting to unravel. But I wanted to shoot this test so much that I just continued with it. Allow me to explain why that was the wrong decision.

The AR-6 bowstring is not a single string. It is a bundle of loose strings that are looped so they are all of similar length. In the center of this loop the two bundles of strings have another string wrapped tightly around them so they come together into a single strand that is approximately as thick as the end of the arrow. Let me show you.

This graphic from Sir Ralph Payne-Gallwey’s book, The Crossbow, illustrates how a crossbow string is made. See the wrapping of string around the middle that made it a single string.

That illustration from Sir Ralph Payne-Gallwey’s book, The Crossbow, published in 1903, illustrates the way crossbow strings are made. The AR-6 bowstring is made in the identical way.

Now look at what I saw on the AR-6. The middle string wrapping had frayed and come undone. That meant all the bowstrings were now loose. The photo I am showing here is after shooting the bow about 10 more times, so the fraying is more noticeable. 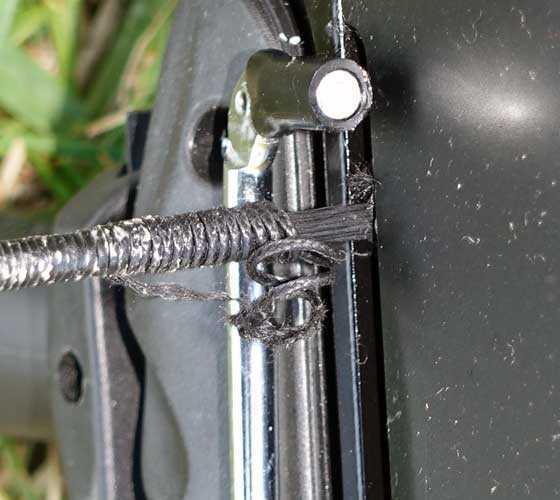 The AR-6 bowstring winding at the center has come unraveled. Now you can see those individual strings.

The arrows for the AR-6 have no nocks. That is quite common for crossbow quarrels, bolts or arrows (all the same thing). The way they work, a wide nock that stays in the plane of the bowstring when it is loosed works just as well as a forked nock, because the bowstring moves along the bow deck with downward pressure on it. That keeps it aligned with the plane of the bow deck and the butt of the arrow throughout its travel. 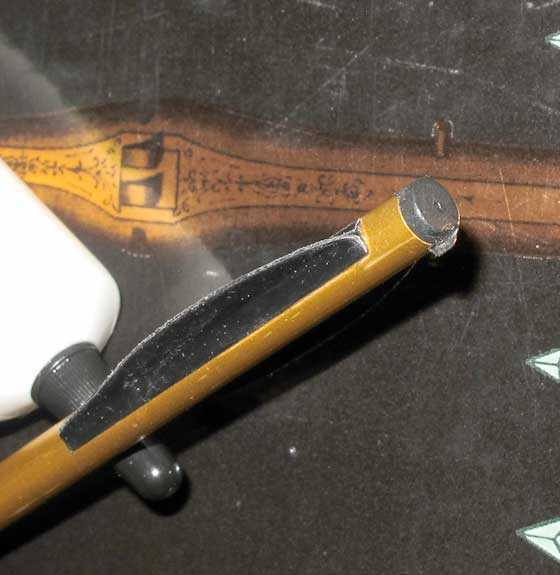 The AR-6 arrows have no forked nock to grab the bowstring. The string is the same size as the end of the arrow and it remains aligned with the arrow throughout its movement as it pushes the arrow down the bow deck. 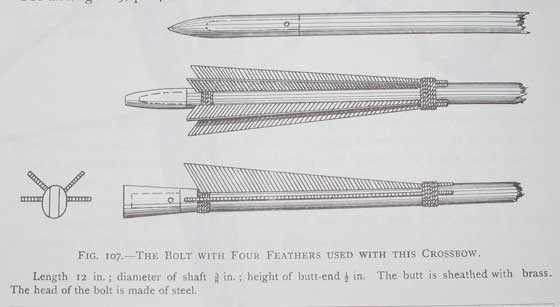 Again from the book, The Crossbow, a medieval bolt. As you can see, the nock is a solid piece of brass that is as wide as the wrapped bowstring.

So — what happens when the arrow is pushed by a conglomeration of loose strings instead of a solid string that is as large as the butt of the arrow? The strings that are no longer solid but are now loose to flow and move slip underneath the arrow, jamming it up inside the crossbow magazine and wedging themselves underneath. The arrow never leaves the bow. And this upward string pressure bends the arrow. The bend is slight, but it ends the life for that arrow. I ruined three arrows this way!

You might ask why I ruined three arrows and didn’t stop after the first one. The answer is — I didn’t get it right away. I didn’t understand what was happening until it happened the third time in exactly the same way.

Some of you readers give me way too much credit for knowing things. I have to tell you that a lot of what I have learned I learned in just this way — the hard way! That is why I don’t lecture you or act like I’m so knowledgeable. Because I am always awaiting my next hard-earned lesson. Oh, the tales I could tell!

I am not done with this series. I have placed two new bowstrings on order, but they are backordered here in the U.S. right now. I may even take a crack at repairing this bowstring with dental floss. But that’s an aside. I will do something else to keep this series going. I will attach the hunting limb and bowstring, so I can continue to shoot the AR-6 We aren’t done yet.