It will be hard to say what happened exactly before I get this gun running again. That’s assuming I can even do that. I will try, and I will document what happens so I can report it to you. But for now I was sure Part 2 of the 1896 New King Single Shot, the velocity test, was over.

The New King shot tube is bent about a third of the way down from the muzzle on the right.

I have written about how single shot BB guns have breeches that are tapered to hold the shot when it’s dropped in, but I had never seen one until I examined this shot tube. Let’s look. 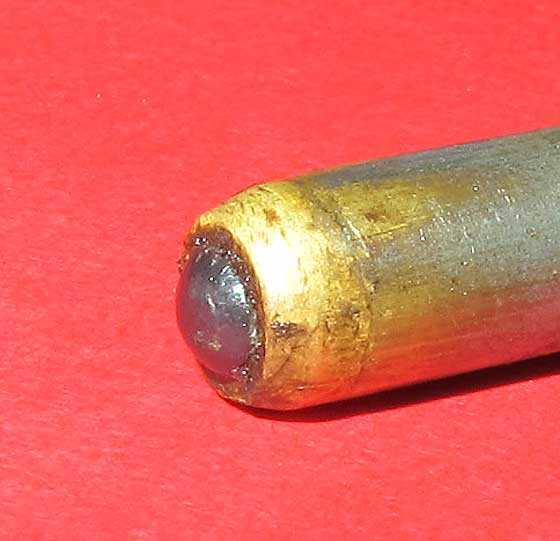 This photo shows me two things. First is the tapered breech that holds the BB in a single-shot gun. This BB is stuck tight! The second is that the shot tube is made of brass.

Besides the tapered breech I also learned that the shot tube is made of rolled brass. That tells me that I can straighten the barrel with some careful tapping with a large plastic hammer while the shot tube rests on the steel flat of my bench vise.

Look at the picture of the shot tube again. See that small steel flange that’s soldered to the tube just behind the muzzle? Well, it fits into a spiral groove inside the outer barrel, and twisting it as far as it will go clockwise will pull the shot tube into the outer barrel and hopefully align the tapered end of the tube with the end of the piston plunger. If I’m right, straightening the barrel should accomplish three things. First, the gun should shoot harder because all parts are in alignment. Second, because the barrel is now straight (hopefully) a lead ball should drop all the way through the barrel to the tapered breech, where it will stop in the taper without getting stuck. And third, if the barrel is straight, I should be able to shoot smaller balls that will now fall into and also stick in the tapered breech.

I won’t need to press the balls down the barrel with a cleaning rod like I was doing before. That was what caused the ball to get stuck in the tapered breech.

With the shot tube out of the gun I had access to remove the lead ball. It was stuck really tight in the breech taper. It took a plastic hammer to start moving it, and it only moved a smidgeon. A pin punch then moved it down to the bend in the tube. I had to bend a wire coat hanger to push it out of the shot tube completely.

When it came out I saw there was only a single BB in the shot tube. At least I did something right? 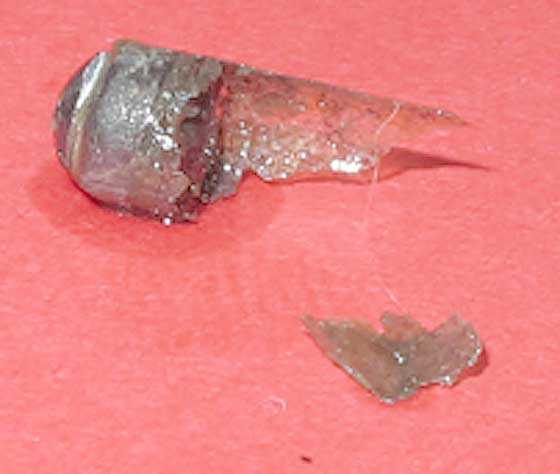 This is the BB that came out. There was only this one BB in the tube. The bore is now clear.

I need to straighten the shot tube and see how the gun reacts. I’m hoping everything I said above is correct and Part 3 will be the velocity test.

I told you the New King was a child’s BB gun. It cocks with 7 pounds of force, making it the lightest-cocking spring-piston airgun I have ever tested.

The single-stage trigger releases with 3 lbs. 4 oz. of pull. That is about right for a direct sear trigger. Anything much less would be unsafe.

This is a short report, but it took me a long time because of all the things I did with the gun. I believe I’m on the right track to get this gun back up and shooting again. The simplicity of the gun is a great help, because much more disassembly would require the removal of rivets.