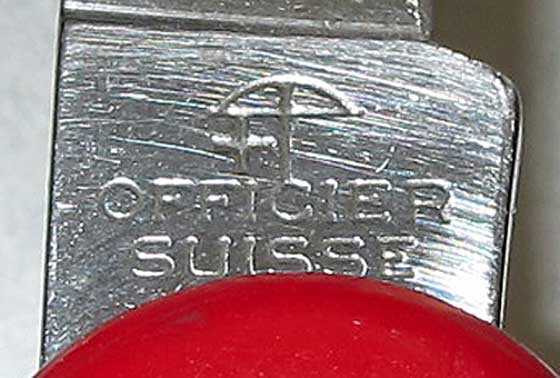 Well, what’s it going to be today? What sort of craziness has BB Pelletier dreamed up for you?

Some of you call me the Great Enabler. Maybe I am, but I’m not alone in that. Some of you say stuff that enables me, too. I don’t know where it was, or even if it was on this blog, but sometime in the past few months I became aware of the toothpick crossbow. That’s right — a tiny crossbow that shoots toothpicks instead of arrows or bolts.

I didn’t believe it, so I went on eBay and entered the search term “toothpick crossbow.” Sure enough, several toothpick crossbows came up, along with a number of Victorinox Swiss Army knives. Some research turned up that the crossbow is an official or quasi-official stamp of quality for Swiss-made products. Victorinox stopped using it in 2005, but several of my larger knives have the mark. It looks something like an umbrella and many people call it that.

The crossbow that many people call an umbrella, and the Swiss cross are marks of quality.

Anyway, back to the toothpick crossbow. They do exist, and today I’m going to show you one. I bought the cheapest one I could find, which sold for $4.67 with free shipping. It came from China, so I don’t think there was even any tax. I don’t plan on keeping it for long, but I was curious and I thought you might be, too. There are some priced as high as $39.00 and there is even one that’s a 5-shot repeater, selling for $44.99!

But I bought cheap, because this doesn’t seem like something I’m going to pursue for long. However — what can a toothpick crossbow do? Inquiring minds want to know.

For starters I wondered how far this thing would shoot. I think many of us were surprised when reader minuteofsomething showed us a blowgun that would shoot spaghetti through a soda can and even hit a target that looked to me like it was 15-18-feet away. I imagine the crossbow we are looking at today will go about one-third as far, but I plan to test that to see.

It took 10-12 days for the “kit” to arrive and it came in a mailer envelope, because, let’s face it, this thing is small. There were no instructions — not even a small page of pictograph drawings. So I figured this thing was a cinch to assemble. 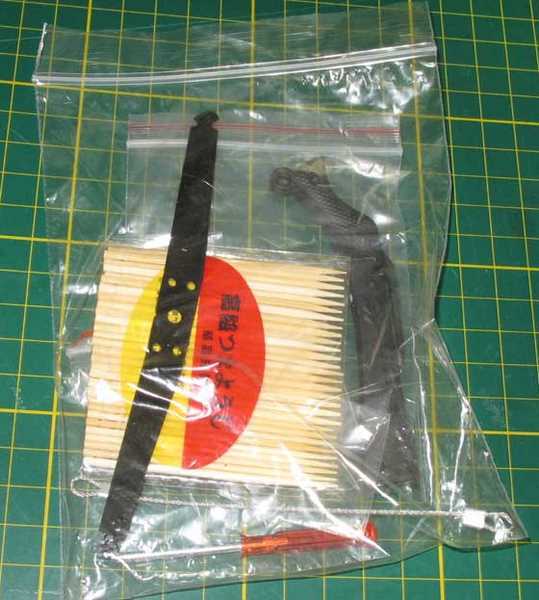 Everything you are about to see came like this. They even include a tiny Phillips screwdriver for assembly of the one screw. 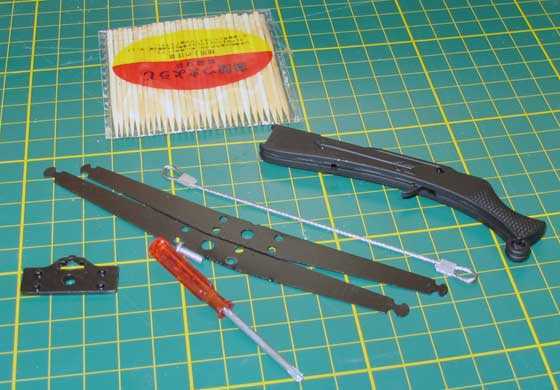 These are all the parts of the toothpick crossbow, plus the small screwdriver and a package of toothpicks.

And as it turned out, the crossbow went together easily. The two limbs are used together to give more push. About 3-4 minutes and — Ta-Da! 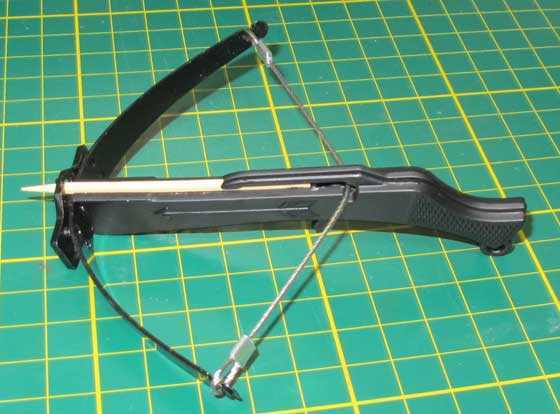 Ta-Da! The crossbow is assembled and loaded. 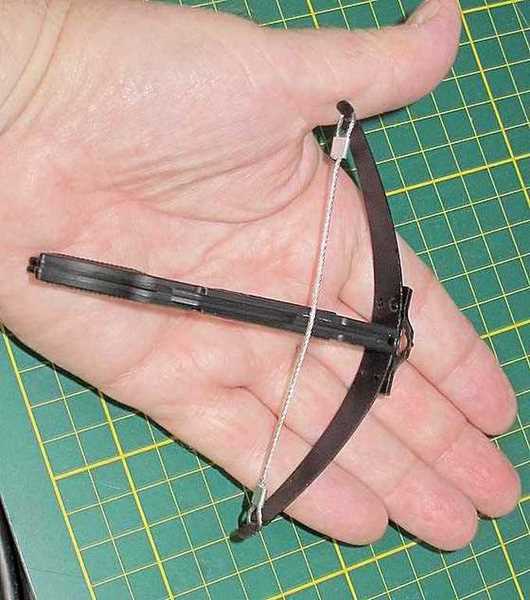 Yep — this crossbow is tiny!

The Sharpshooter rubber band guns had me shooting at targets 8 feet away and they made very little noise. This thing wants to shoot even closer and is completely silent!

I set up a one-inch thick Taverner dartboard at three feet and fired an “arrow” at it. To my surprise, the arrow hit the target and stuck in it! And there are no sounds that my hearing-aided ears could detect! If I tried to test the sound with my sound meter all we would get is the ambient noise in my office. The arrow didn’t hit where I aimed, but aiming with this thing is more of a suggestive word than it is descriptive. 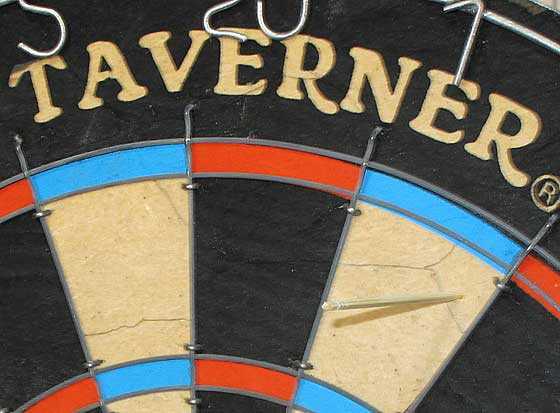 The toothpick crossbow actually stuck a toothpick in a thick dart board at three feet!

I shot a couple more toothpicks at the target and they bounced off. From what I can see I don’t think they are striking the target square. The one that did stick sort of shows that. But maybe there’s something that can be done.

I have a supply of party toothpicks that are used to serve food. They have colorful plastic streamers on one end. 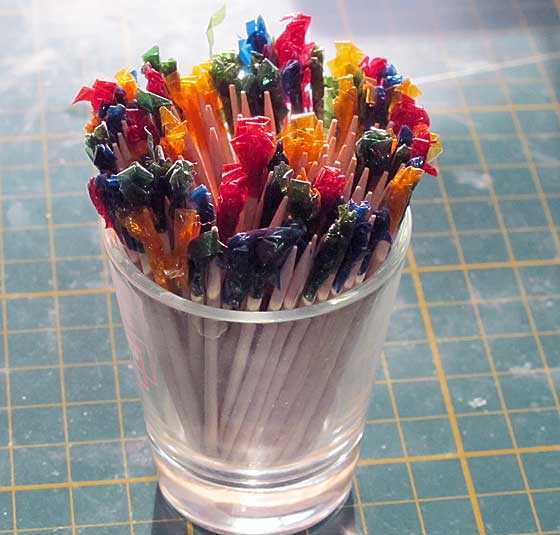 These colorful party toothpicks have plastic streamers on one end that might act as fletching.

I would love to tell you that the party toothpicks were just the ticket and boy, what a clever guy am I, but it didn’t work that way. The plastic dragged in the mechanism and the toothpick dribbled out of the crossbow with no force.

I discovered that there is a small bump on the launching deck that stops the arrow as it is inserted into the crossbow. If I stop pushing it in at that point instead of driving it all the way back to the string, the crossbow gains a lot of velocity. 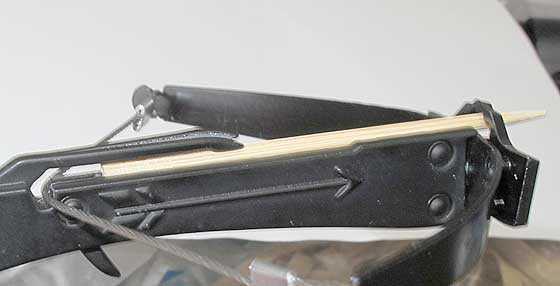 That tiny bump in the launching deck of the crossbow stops the toothpick some distance from the string. This seems to increase velocity.

With the right target might this thing might stick at 10-15 feet? The dartboard is just too dense to stop the arrow reliably. But a flattened target made of duct seal might just do the trick. Or…

I also have several sheets of dense Styrofoam that I thought would work well — and they did! The arrows stick in 2/3 of the time. Now I have to work on aiming. Gotta admit that I never shot farther than three feet. 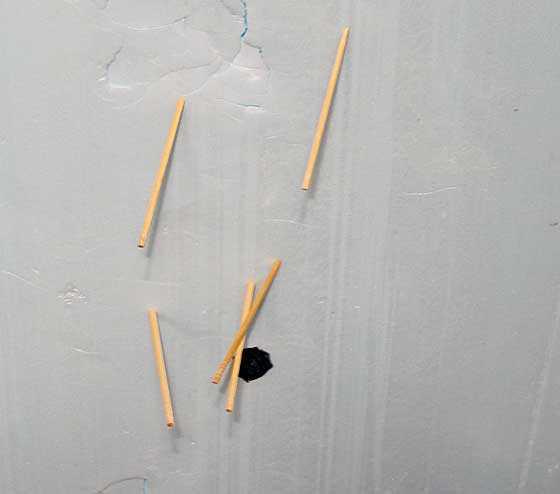 The camera angle was pointing downward, so the toothpicks aren’t quite as slanted as they appear, but they all did hit and stick on an angle.

I’m not doing any of these tests. My guess is the velocity is between 60 and 80 f.p.s. This is a toy and none of these tests make any sense.

Because this is a toy, don’t expect it to last. I unstring the bow after each use, but the limbs have already started taking a set. This is a novelty at best. Yes, it will shoot the toothpick 20 feet or more, but there is no hope for accuracy at that distance. There are probably better examples of these, because, like I said, I bought the cheapest one I could find. But even with the best one, what have you got?

I got this thing just to show you what’s out there. It was fun playing with it, but now it’s time to focus on the airguns that are, after all, the main theme of this blog.