Today we begin looking at an air rifle that I thought had vanished from the airgun scene — the .177-caliber Benjamin 397. It’s different than the 397 we knew before in one obvious way. It now has a synthetic stock and forearm/pump lever. I guess Crosman realized that this rifle will never go away and it was time to invest in the dies for molding the stock parts, rather than keep chasing after wood that’s getting harder to find. The barrel and pump tube still seem to be soldered together by a huge soldering machine that must be older than many of you readers.

Know why I missed it? Because Pyramyd Air doesn’t call it a 397 on their website. They call it a Benjamin Variable Pump Air Rifle — period! They probably do that because it is so different from all the previous 397s. It wasn’t until I pulled the box from the shipping carton that I saw the 397 model designation.

If you are a Benjamin multi-pump buff, all of this begs the obvious question. If there’s a 397 is there also a 392? Why — yes there is! In fact, Pyramyd Air now has both rifles on the same web page with a PICK YOUR OPTION caliber choice button.

If you look at the price you’ll see that a lot of money has come off. It’s considerably less expensive than it was before. That’s no small thing.

According to the information on the web page, which is fed to Pyramyd Air by Crosman, the 392 shoots up to 800 f.p.s. This has got to excite some of you diehard multi-pump guys who remember the previous days of 650 f.p.s. It sure excites me! By venturing into these stratospheric velocities Crosman has given us the American version of the Sharp pneumatic!

Well, what  it’s like will be the subject of this report. I strongly suspect it might last past the usual three-and-done format. First off — how did they do it? How did they take a .177 multi-pump that was famous for getting into the high 700s (maybe 775 f.p.s.) and push it to 1100 f.p.s.? Okay, the box tells me a little.

If you know your Benjamin 397s, this graphic tells you a lot!

What the box tells us

Benjamins have limited their maximum pump strokes to eight for as long as they have listed how many pump strokes should be used. I think they picked up the number 8  when they bought the Sheridan company. This gun will accept up to ten pumps. Also, in the past, Benjamin guns never recommended shooting with less than three pumps. This one gets in the 600s on just two pumps! I wonder what it gets on just one?

So I read the manual. I know — that cancels my man card for the rest of the month. Well, the instructions there say to never put in less than THREE pumps. But they did get the 10 pumps right. So — which is it? Apparently the guy who wrote the manual never got to read the graphics that went on the box!

You know me. If Crosman went to all the trouble to put the expected velocity for a certain number of pump strokes on the outside of the box, you know full well that I’m going to test it.

I wrote everything in this report up to this point before opening the box. Then I opened it and took out the rifle. Oh — it’s heavier!

No — it is not heavier. I weighed the test rifle on my kitchen/postal scale and it weighs 5 lbs. 10.4 oz. The specs. say 5.5 lbs. so they’re within 2 ounces. I think the dark synthetic stock makes it seem heavier. I have to grasp it harder because the synthetic seems slicker than the older wooden stock. But that could be just another error in my judgement like the weight.

The forearm is longer by several inches for increased leverage, and it makes a loud clacking sound when it slaps agains the pump tube. This is the perfect place for some thin rubber, and my old silicone kitchen cutting mat is probably the perfect thickness. If I were keeping the rifle I’d glue a sliver of the mat on the pump tube where they connect.

The butt has a thick, soft rubber pad that’s integral with the synthetic stock. It’s perfect for standing the rifle on its butt in the corner, because it won’t slip.

So what makes this 397 so much more powerful? Yes, it accepts two more pump strokes, but that can’t be all there is to it, can it? Surely it has a longer pump stroke?

No. It doesn’t seem to. And don’t call me Shirley.

Well then the bolt must be harder to cock because of an extra-strong hammer spring? Nope again. However…

As I pumped the rifle the compression felt very strong right from the start. I do have an older wood-stocked 392, but that one is a pump-assist model, so a comparison of pumping effort between the two airguns can’t be made. But I also own a conventional Sheridan Blue Streak. As I recall, multi-pumps start out easy and get harder as they go. This one starts out hard. So I pumped it 10 times to see how that felt. It wasn’t that much harder on the final stroke, but I will weigh it for you in Part 2 when I test the velocity.

I know the Sharp Ace (a vintage multi-pump pneumatic from Japan) gets a lot harder to pump as the strokes increase. But the Sharp has a different style valve and its trigger also becomes harder to pull the more the rifle is pumped. The 397 has a conventional slam-fire valve, so the trigger pull remains constant at all times.

The cheekpiece is too high!

Now here’s something I have never before experienced. When I hold this new 397 to my shoulder normally I can see the last 10 inches of the barrel and the front sight in the rear sight notch. No amount of adjusting brings it any lower. The raised cheekpiece is way too high for my fat face. Yes, I need to loose weight, but I don’t think that will fix this. There is not enough drop in the buttstock of this air rifle. The high comb should be eliminated or the line of the butt should drop more. Or both. Crosman, you should have let a rifleman try out the stock before committing to those expensive molds!

I can compensate for the too-high comb by holding my face behind the comb to see the sights, but what an unnatural hold that is! That’s how I will have to test the rifle, but I wouldn’t buy a 397 as it is now configured.

Some people believe that the solution to the too-high comb is to mount a scope. This is NOT an air rifle to be scoped! A scope is next to useless on multi-pumps with underlevers because it gets in the way of placing your other hand over the breech when you pump the gun. I hope someone recognizes this fault and comes out with an aftermarket wood stock that has the right proportions. Yes, everybody’s face is different, but read the comments on the Pyramyd Air description page and you’ll see that several others are talking about the same thing.

Synthetic stocks are only cheaper than wood after many thousands of airguns have been sold. The huge investment in the dies needed to mold the synthetic parts has to be amortized first.

There are several complaints of paint overspray inside the muzzle of the barrel. So I looked at mine and, sure enough, there it is! I will clean the barrel before testing the rifle for accuracy, because something at the very exit of the barrel is not conducive to good accuracy. Sure, a few hundred shots will clean it out and everything will be hunky-dory, but I won’t be able to shoot that many in this report. I really doubt the slight amount of paint affects anything that much, but there were several complaints so I will respond. 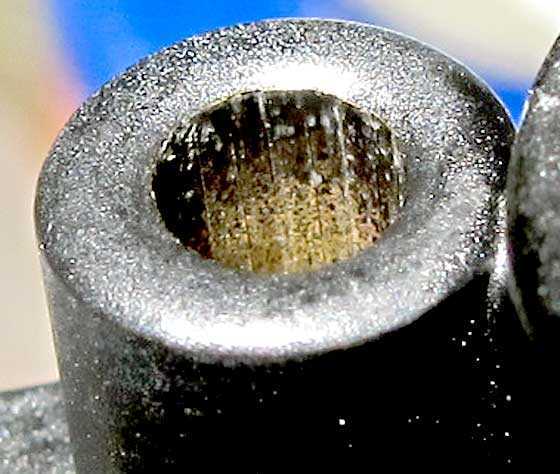 Some of the paint has gotten into the barrel at the muzzle. I will clean it out before testing accuracy.

This rifle has a brass barrel. Benjamin multi-pump airguns have ALWAYS had brass barrels. Brass won’t rust in the presence of the moisture this airgun generates! I say that because one customer complained that this airgun barrel is made of brass and not steel! Come on, buddy — learn about airguns! Brass costs more than steel anyway!

This new rifle has the same push-me, pull-you rear sight from decades ago. To adjust it you loosen the screw on the side where you want to move the rear notch toward and tighten the other side. In my opinion Crosman could have made a synthetic copy of the existing wooden stock without the high comb and spent some real money here, because most shooters don’t like adjusting this sight. 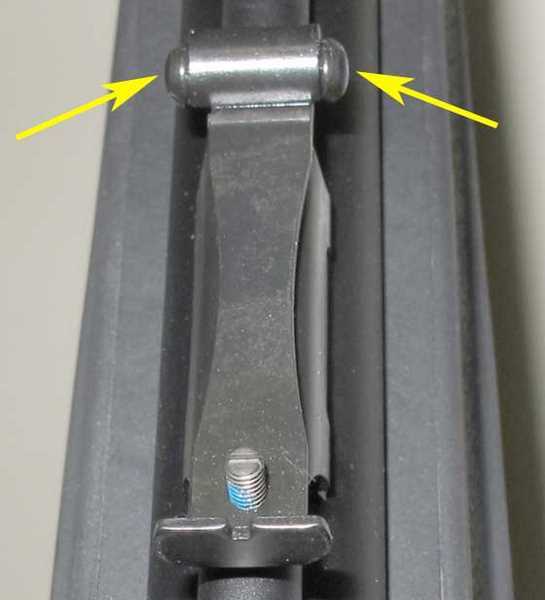