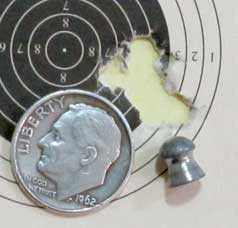 Pyramyd Air will be redoing the website and the blog design next week. The anticipated cutover date is Wednesday evening, 1/27/21. Therefore my last blog posting before the new site goes live next Thursday will be this Friday, 1/22/21. There is a possibility that the blog will also be dark on Thursday, 1/28/21.

Nobody likes missing the blog for several days, but I will use the time to get several things done that take a lot of time. Please bear with us as we make this transition. I will remind you of this tomorrow and Friday, too. Now on to today’s report.

Back with the Benjamin SAM

Okay, we’re back at it with the Benjamin Semiautomatic Marauder again today! Today will be a quicky but also an important-y. Brilliant reader, Kevin, reminded me of how I could bypass the SAM magazine by loading singly and see what the rifle was really doing. Reader GunFun1 said his SAM was shooting way better than what I showed you in Part 4. So — today is the day we find out for sure!

Reader RidgeRunner advised me to pull all the baffles first, to verify that none of them was being hit by a pellet. I pulled all seven of them and the large holes through each one are clearly not being touched by pellets. We can rule out the baffles as a problem that causes inaccuracy. That leaves either the barrel or the magazine. Given that this is a semiauto, I suspect the magazine. Loading each pellet singly will make the determination.

Because of the narrow SAM receiver slot that’s cut for the magazine, loading pellets single shot is not straightforward. At least it wasn’t for me. I tried needle-nosed pliers with a long thin nose, but what worked best was a hemostat — long thin clamping pliers used by surgeons. I didn’t clamp them. I only held onto each pellet loosely until the bolt pushed the pellet into the rifle’s chamber.

I tried to repeat the first accuracy test from 25 yards exactly. The rifle was rested directly on a sandbag at 25 yards and the pellets were loaded singly. I positioned a light to shine on the breech so I could see to load the pellets. Care was taken not to damage them in any way. I did not adjust the scope for this test, but I will have more to say about the scope in a bit.

In the first test that is covered in Part 4 I sighted-in with Crosman Premiers and also shot the smallest group of 10 with them. It measured 0.454-inches between centers.

Loading singly this time 10 Crosman Premiers went into 0.349-inches between centers at 25 yards. That’s enough better than the first test to be significant. The point of impact shifted over to the right but remained just as high as it was in the last test.

When loaded singly the SAM put 10 Crosman Premier pellets into 0.349-inches at 25 yards.

Next up were ten JSB Exact Jumbo RS pellets. In the first test the SAM put ten of them into 0.521-inches at 25 yards.

In today’s test by loading singly the SAM put ten JSB RS pellets into 0.431-inches at 25 yards. That’s quite a bit better than the last test. As before, the point of impact also shifted to the right just a little. 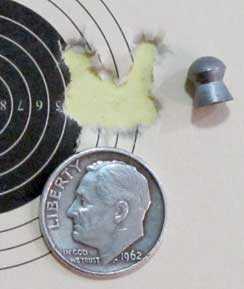 The final pellet I tested is the one I was most interested in. In Part 4 the Air Arms 16-grain dome scattered all over the paper at 25 yards. The 10-shot group measured 1.159-inches. Would loading singly help this pellet?

Well, it did help! This time ten of the singly-loaded Air Arms domes went into 0.46-inches at 25 yards. It is the largest group of today’s test, but it’s almost the same size as the smallest group in Part 4 when the magazine was used! I find that fascinating! 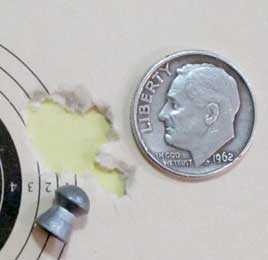 When loaded into the SAM one at a time, ten of the Air Arms 16-grain domes went into a group measuring 0.46-inches between centers at 25 yards.

It should be clear to everyone that the SAM magazine is the reason the first accuracy test didn’t do so well. This is not my air rifle so I can’t modify the magazine the way reader GunFun1 told us about, but if I could I would. The SAM feeds reliably enough, though when I load it singly there is a slight problem. Longer, fatter pellets do not seat into the breech deeply enough to clear the air transfer port in the breech. That’s why I didn’t shoot a test group of Beeman Kodiaks. I shot four and had trouble getting them past the air transfer port unless I let the bolt slam on them. That seemed to open the group, so I stopped the test.

I will also point out that today the SAM is not very picky about the pellets it likes. That means we can rule out the barrel as a potential problem.

UTG scope was a huge benefit!

I told you that I mounted the UTG 4-14X44 SWAT scope on the SAM for Part 4. Well, that illuminated etched-glass reticle is worth the price of the scope! It made seeing the crosshairs so easy against the black bullseye!

This SAM is very accurate and today’s test proves it. The magazine may need a period of prolonged break-in. Or GunFun1’s modifications might do the trick.

I will shoot the SAM at 50 yards. Because of what we have seen today I will also load singly for that test. If I owned the rifle I would modify the magazine, but I will be sending it back and the mag has to remain as it came to me.