For many years I lusted after the iconic Sheridan model A, which is known among airgunners as the Supergrade. It was the first Sheridan air rifle to be produced and production commenced in 1947 — the year of my birth.

What is a Supergrade?

I was unaware of the existence this fine multi-pump pneumatic at the time when it was being sold, which ran from 1948 until sometime in the middle 1950s. Production ended in 1953, but stores continued to sell guns until their stock ran out. Supergrades sold for $56.50 in 1948, when Winchester model 61 slide-action rifle were selling for $44.50. Today a 61 that’s excellent in the box will bring $1,800-2,500, and a Supergrade in the same shape brings even more. This is one air rifle that has appreciated in value. According to the book, <i>Know Your SHERIDAN Rifles & Pistols</i> by Ronald E. Elbe, 2130 model As were produced. read more

This will be our final look at the Black Ops Junior Sniper air rifle combo. Today, I’ll mount the scope and shoot the rifle from 25 yards. I thought this report would just be about the rifle and scope; but, in fact, I learned 2 other very important lessons. So, today’s blog will be informative. There are also two short instructional videos.

The scope that comes with this combo is the cheapest kind of optical sight you can buy. It’s a 4x scope with a very skinny tube — less than .75 inches. The rings come already attached, so all I had to do was clamp them to the top of the rifle, and the job was done. That said, I had no idea if the scope would even be on the paper at 25 yards. read more

This is the report you’ve been waiting for. How accurate is the Black Ops Junior Sniper air rifle combo with steel BBs? Today, we’ll find out.

I went back to Part 2 and discovered that the rifle gets almost 500 f.p.s. on 3 pumps when shooting BBs. Since I was shooting at 16 and a fraction feet (5 meters), this was more than enough velocity for the test. It also sped up the test a bit. read more

Let’s look at the accuracy of the Black Ops Junior Sniper air rifle combo. I’m shooting lead pellets, only, and I’m shooting at 10 meters with open sights. This will not be the last test with pellets, because this combo does have a scope. But for today, I’m just getting used to the rifle and seeing how it does.

I decided to shoot 10 shots off a rest at 10 meters using 5 pumps of air. You can refer back to Part 2 to see what kind of velocity that gives me. read more

Today, we’ll look at the velocity of the Black Ops Junior Sniper air rifle combo. I told you last time that the loading trough is narrow and difficult to access, and I tried to photograph it for you but was unable to get a picture that showed what I’m talking about. Just take my word that this rifle has much less access room than a Daisy 880 or a Crosman 2100. read more

What is it?
The rifle is a stylistic black rifle (based on the M16 platform). It’s stylistic because no black rifle has a hole in the forearm like this one. And the barrel leaves the upper handguard differently than an M16 barrel. And the sights are different. And so on. But the object is to appeal to those who like the black rifle look, and I think they did that. read more 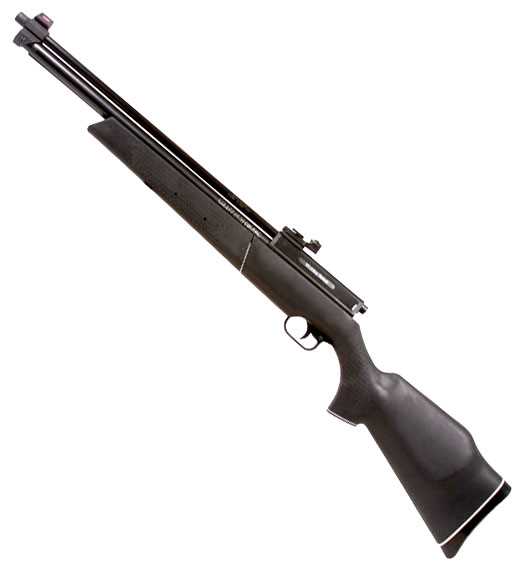 Today, we’ll look at the first accuracy test of the Webley Rebel multi-pump pneumatic. I told you last week that this test was scheduled for a certain day and I had so much trouble with the rifle that I had to write about something else. Today,I’m going to tell you why. read more