Today we begin looking at the velocity of the .25-caliber Umarex Gauntlet 2 precharged rifle that I’m testing. I’ll tell you right now, there are some pleasant surprises coming today!

I agonized over this test, as I told you several days ago, because the Gauntlet 2 is supposed to get more than 50 powerful shots in .25 caliber and more than 70 in .22. This is one time I am glad that I chose the .25. You’ll see why I say that as the report unfolds.

I had planned to test the shot count and velocity with the rifle charged to 310 bar/4500 psi and then to fill it to 3,000 psi with a hand pump and test the shot count for that, as well. Many shooters can afford the Gauntlet 2 and a hand pump, but they aren’t ready to take the plunge to a carbon fiber air tank or a small compressor that goes up to 4500 psi, just yet. Believe me — I understand. Been there; done that; got the t-shirt and wore it out!

But sometimes when you plan something out, life happens and man’s best schemes Gang aft agley! That’s what happened to me today. But it was a good thing — a serendipitous thing. And we will all be better for it.

I filled the rifle on October 7, the week before Part 1 of this report was published. When I checked the onboard gauge today it was down a few hundred psi, so I topped it off and the onboard gauge read full. It was probably down a little because it had cooled off since I last filled it. At any rate I went into this test with a full reservoir.

What pellet trap to use?

Since I had just finished testing the rubber mulch pellet trap I thought I would use it for today’s test. It certainly would be quieter than my steel trap. I had my electronic earmuff hearing protection ready to use, but I fired the first shot without wearing them, just to hear how loud it was. It was loud, but not nearly as loud as I had imagined. No hearing protection was needed. Though I was in my garage, I fired up the sound meter to record the second shot. 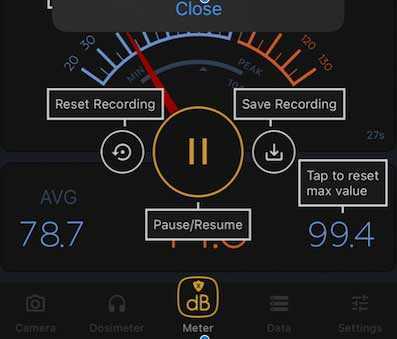 The Gauntlet 2 is loud but not overly so.

The rubber mulch trap absorbed much of the rifle’s noise. I put the steel bullet trap behind the box as a precaution, but we’ll see later that it wasn’t necessary.

I decided to use the JSB Exact King Heavy pellets to test both the velocity and the shots count of the Gauntlet 2. These pellets are not the King Heavy Mark II, but the earlier ones. They weigh 33.95 grains, which will deliver a wallop in .25 caliber!

I’m going to show you every shot in this report, because it has a bearing on where I’m going today. Here we go.

The average for this string was 859 f.p.s. and at that velocity this pellet develops 55.64 foot-pounds of energy. That’s slightly more than the advertised 51 foot-pounds. The velocity spread for this string went from 847 to 867 f.p.s. That’s a 20 foot-second difference.

I wanted to try a lighter pellet, so for the second string I shot .25-caliber Benjamin domes. They weigh 27.8 grains and in the Gauntlet 2 this is what they did.

* I don’t know what happened with that shot, but it sounded weaker. It wasn’t a wrong pellet, either. Perhaps the Gauntlet 2 is just wearing in?

At the average velocity this pellet develops 50.91 foot-pounds. That’s almost the advertised energy for the .25-caliber Gauntlet 2, and the rifle has done it with a lighter pellet!

Back to JSB Exact King Heavys

From this point on, I shot JSB Exact King Heavy pellets. That way we can get a reliable shot count.

The online description says the Gauntlet 2 is 15 percent easier to cock than the first Gauntlet. I can’t tell whether it is or not, but about at this point in the test I discovered something that I think is important. You can’t feel when the rifle cocks. There is no positive stopping point for the bolt, nor is there an audible cue that the rifle is cocked. The bolt simply becomes mushy (and harder to pull) as it is pulled back. It is at that point that the rifle is cocked. Once I developed a feel for it I also knew how to handle the rifle.

You don’t handle an M1 Garand by pussyfooting around. You pull the cocking handle back with a lot of force and when you load a clip you anticipate the place where the bolt will snap forward and close. In short, you handle a Garand like a man. Same same for the Gauntlet 2. Once I started doing that the rifle was very easy to handle.

At this point in the test I was getting tired. But the Gauntlet 2 wasn’t. So we carried on.

This is like trying to keep up with a marathon runner when you started running at mile 20! This .25 Gauntlet 2 really wants to shoot! The average for this string was 857 f.p.s. which generates 55.38 foot-pounds with this pellet. The spread went from a low of 851 to a high of 864 f.p.s., a difference of 13 f.p.s. Cowabunga!

Just for fun, I took a picture of the onboard pressure gauge at this point, after 72 shots had been fired. 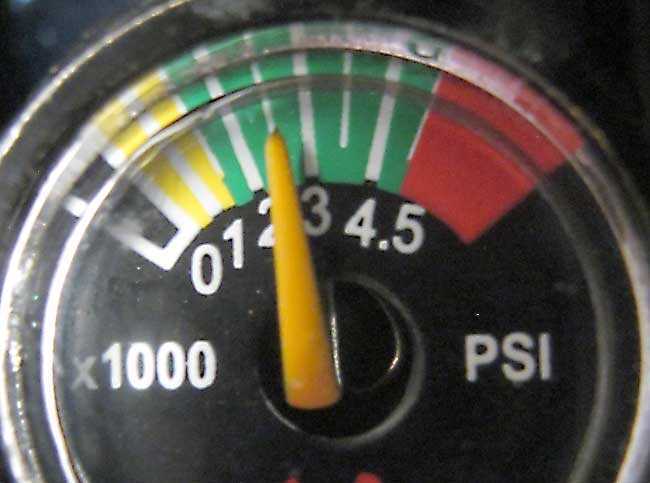 The onboard gauge after 72 shots have been fired.

Finally! We seem to have dropped off the power curve, that in this case is the regulator, at shot number 77. That means there were 76 powerful shots in the test rifle. The slowest shot in those 77 was shot number 75 that went out at 846 f.p.s. The fastest shots in the 77-shot string were numbers 3 and 6 that were both 867. So across 76 shots the velocity varied by  21 f.p.s. That’s a lot of shots — especially at this power level!

I took another picture of the gauge at this point. 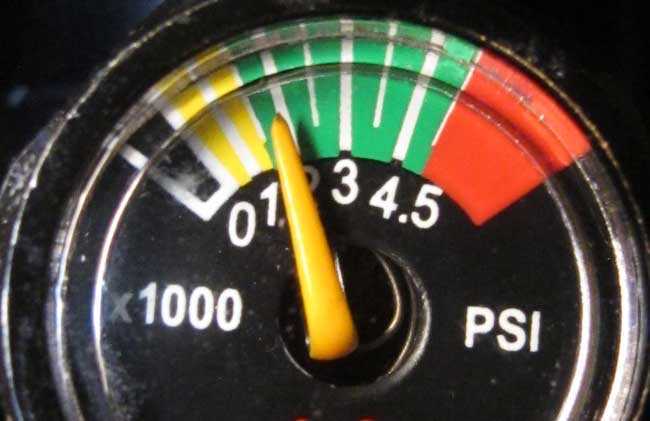 After the final string the gauge looked like this.

I thought you would never ask. The trigger on the Gauntlet 2 feels squishy. But, like cocking the rifle, it’s a squishy that can be learned. I still can’t always feel when the trigger is going to break but I am getting closer.

When I measured the trigger with my gauge stage one, the squishy stage, stopped at 2 lbs. 15 oz. and stage two broke at 3 lbs. 2 ozs. Perhaps it’s just the closeness of the two stages that’s throwing me. This trigger is adjustable and I had better give it a go.

I used the rubber mulch target trap for this entire test, and that was on top of the 20 shots and one arrow that had already been shot into it. So it did get chewed up a bit, and I thought you would like to see that. 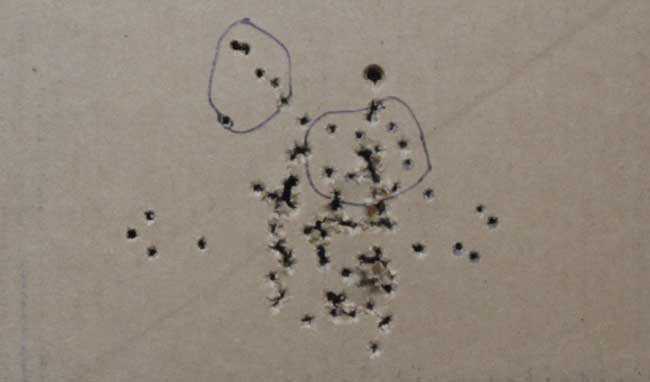 There are the 80 holes that were made in this trap from this test plus the 21 holes from the two past trap tests.

I show you the trap in case you wonder, as I did, whether the pellets can eat their way through the rubber mulch. We know from yesterday that pellets that are even more powerful couldn’t even make it five inches into the trap, but what about the constant pounding of a test like this?

Well, I turned the trap box around and looked at its back, as well as the cardboard backer I placed on my steel pellet trap that was backing up the mulch trap. There were no new holes in the back of the box, nor were there any holes in the backer board on the steel trap. The mulch trap did its job! 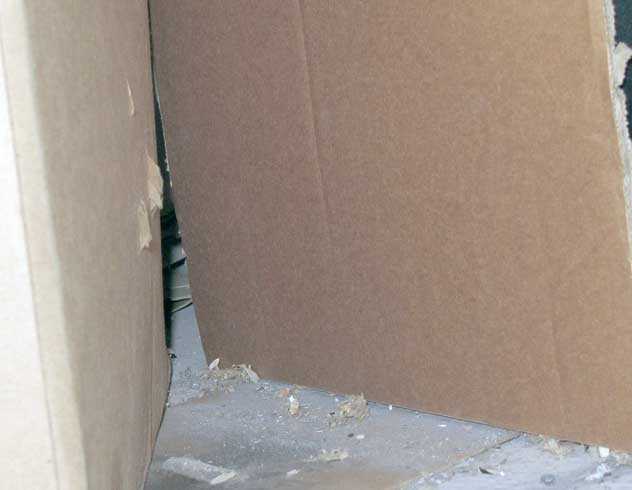 After 80 shots into the trap, nothing made it to the back. Those holes are from previous tests.

I wanted to test the rifle after filling it from a hand pump but that didn’t happen this time. Next time I’ll do that plus I’ll adjust the trigger so stage two is more distinct from stage one.