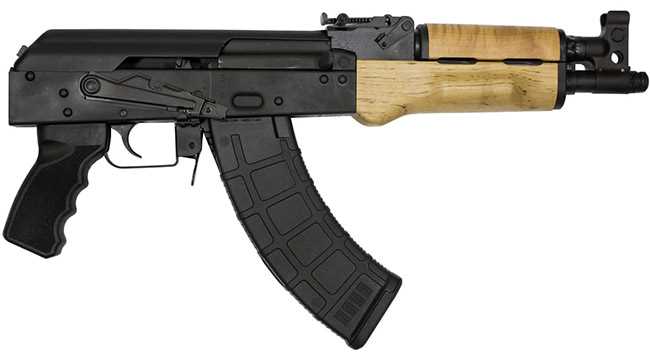 The title
And the Draco?
So, BB — AIRGUNS?
Toys?
So what?
Summary

BB is venting today and he might even come to a point. Please make your coffee extra strong and maybe eat a doughnut or two. Remember — doughnuts are what made BB Pelletier the man he is today!

Okay, the title. Who says Dracos don’t work? And what the heck are they?

Dracos are shortened (so-called pistol) versions of the venerable AKM that is itself an updated and modernized AK 47. And the AK platform is one of the most reliable and venerable personal military weapons ever designed. Unlike the M16 that was rushed into production (as in, “You want it real bad? It’s real bad right now!”), the AK 47 was brought along slowly and eased into production as a replacement for the Simonov carbine — the SKS. Old BB owns a Russian-made Simonov and there ain’t nothin’ more reliable on the planet. Oh, they do have some problems, like a firing pin that can break, causing the gun to go full-auto at the most embarrassing times. But for battlefield reliability, not even a well-maintained Garand can keep up with an SKS! Shame on you, BB — you must repent!

The bottom line is the fact that the Simonov and AK platforms are based on the venerable 7.62 X 39mm cartridge that was a Soviet offshoot of the earlier German 7.92 X 33mm Kurtz — the 8mm short. The Germans had a great idea to arm their troops with the Sturmgewehr 44. The genius of a shortened .30-caliber (or 8mm) cartridge made the resulting platforms a stroke of genius. Smaller cartridges for less recoil, faster recovery in battle and less training time. But up to about 300 meters they still performed well.

But the American Army went about developing such a cartridge and rifle exactly bass-ackwards. The platform that Eugene Stoner designed for the 7.62X51mm (.308 Winchester) cartridge was fine FOR IT’S INTENDED PURPOSE. So the Army tried to stuff a .222 Remington Magnum gopher round (that they paid plenty to turn into the 5.56X45 mm that Remington spun off as their .223 round) into a platform built for a .308 cartridge. The result was decades of embarrassment as American troops around the world became the extended testbed. Black eyes and embarrassment after embarrassment made the design get better and better until, by the 21st century, it was about where it should have been in the 1970s. HOWEVER — what’s this? American shooters are now stuffing .300 Blackout (a .30 caliber bullet into the 35mm long case of the 5.56mm cartridge) and shortened 6.5mm cartridges into AR-15 (the civilian version of the M16) platforms. What’s this — private parties developing what should have been developed by the government? BB — say it ain’t so!

The Draco is a subminiature version of the AKM. It has very few practical uses, since it fires a rifle (or carbine) cartridge from a 10.5-inch barrel. Can you say muzzle flash? Can you say losing half the potential energy or more? But kids playing video games don’t know that, nor do they care. Dracos are popular with the video game set.

Dracos are also popular with rappers. They just like the name and the way-cool look.

Here’s the deal. Because Dracos are way cool, they have been made into airsoft guns, because the boys who play video games like to keep playing when mommy sends them outside. And, since the Asians call airsoft balls BBs, half the planet thinks Draco BB guns already exist. So why not turn a Draco airsoft gun into a real BB gun that shoots steel BBs? Everybody has got to love that, no?

Yeah, toys. Toys for rappers and video gamers. For shooters? Not so much.

Don’t get me wrong. The Draco has a place in life, and if you are a protection agent, perhaps its place is with you. If you are a couch commando it might be a nice gun to “pet” while you watch episodes of Reacher and the movie Olympus Has Fallen. But to shoot seriously? Not so much.

So lots of people shoot full auto guns and they love them. BB doesn’t.  BB shot thousands (millions?) of rounds of full auto ammo when he was in the Army. BB was a tanker and he shot his commander’s .50 caliber M85 machine gun on tank ranges many times. And he also shot the M73 .30 caliber coaxial gun that moves with the main gun. It’s the one we use to clean enemy troops off our other tanks when we are in combat.

With the M2 Ma Deuce BB shot aerial towed targets pulled by drones (75 horsepower radio-controlled aerial towed target 4-cylinder drones that tow a streamer behind them for anti-aircraft training) and BB got to shoot at the actual RCATTs that the Army was retiring. BB and his troops retired a handful of them early! Full auto? Yawn — ho hum.

However — BB isn’t everybody. If you watch these guys on You Tube shooting firearm Dracos and even airsoft Dracos you’ll see that they apparently get quite excited.

So, given the excitement that we have seen over the four-hundred-dollar Barra 400E automatic electric gun (AEG), BB Pelletier thinks that a Draco that’s a real BB gun shooting real steel BBs would be a hot seller. BB thinks some of you guys are itching for this one and you don’t even know it yet.

How did we get here today? We got here because a reader asked if I planned to review the Barra 400E BB gun. Then RidgeRunner piped in with a disparaging word about the Mattelomatic (M16) and BB’s mind was off to the races.

It points out that everybody on this blog does not think like BB. Some of you are just wrong!

43 thoughts on “Stuff that flat out doesn’t work — a tale of the Draco!”