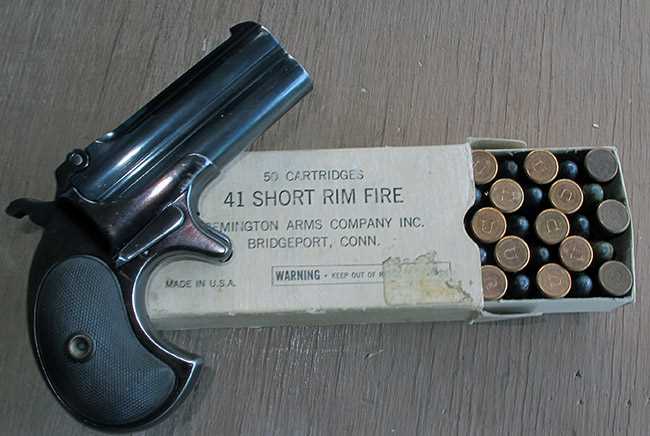 One thing is certain — you will read stuff on this blog that you’ll never find on another airgun website. And today is such a day. Today we begin looking at the .41 caliber short rimfire Remington double derringer. This is the hideout gun that all the gamblers carry in western movies and I have long wanted to know what it was like to actually shoot.

Several months (now several years) ago in a comment to a cartridge reloading report, reader Yogi asked, “What about reloading rimfire cartridges?” As I have done for the 28 years I’ve been writing about airguns, I puffed up my chest and was about to bellow, “Rimfire cartridges cannot be reloaded.” However, in an uncharacteristic move, I went online, just to be sure. Lo and behold, not only can rimfire cartridges be reloaded, people have been doing so almost from the inception of the first .22-caliber rimfire cartridge by Smith & Wesson in 1856.

So, why this series for airgunners? Because, you guys have learned so much from shooting airguns that you will see and understand this material better than most firearm shooters. Plus you’re going to see some parallels to airgunning as the series unfolds.

Okay, that is how we got here. And along the way BB Pelletier learned that he cannot reload .22 rimfire cartridges. Maybe some people can. But despite what the ads say, old BB just ain’t got it in him. If you are interested in following BB’s failed attempts, here are the links:

But, while researching the subject of reloading the .22 rimfire cartridge, BB discovered that plenty of people do reload the .32 rimfire and the .41 rimfire. And BB has always wanted to shoot a Remington double derringer — hence today’s report.

All the bad guys and many of the good guys in western movies carried the Remington double derringer. But what was it like to shoot? Yes, .41 caliber is large, but the reports said that the muzzle velocity was as low as the high 300 f.p.s. range. Was that true? I read several books to find out.

The first book was written by an author, Brendan Murphy, who just wanted to set the record straight. I can identify with that. For years writers have written that the .41 rimfire short is a weak and inaccurate round. It propels a 135-grain lead bullet out the spout at 375 to 450 f.p.s. — hardly a good defense weapon, or so the writers said. But author Murphy wanted to know more. He wanted to know why the round was so weak, when his research told him it should have been more powerful.

In his collection of Remington derringers Murphy discovered that the earliest ones (their entire production was from about 1867-1935, and the early ones were made from 1867-1888) were obviously made for black powder because that was all that was around. Remington continued making the gun more or less in the same way for those black powder cartridges, right up to the end of the 19th century (1898, or so). By that time semi-smokeless gunpowder had been invented and by the start of the 20th century smokeless powder had come on the market. Black powder cartridges were still being made and would be for several more decades but smokeless powder was the wave of the future.

That caused a problem for Remington. Smokeless powder creates more pressure than black powder when both are loaded correctly. Yes, black powder can blow up a gun, but that’s when it is not loaded properly. Remington wanted to continue making their double derringer, but they knew that cartridge makers would soon be loading the cartridges with smokeless powder. How do you keep from blowing up older guns that have already been around for almost 40 years, when more powerful smokeless cartridges are used?

Murphy discovered that Remington did it by making the bore of the newer derringers smaller — 0.399-inches, compared to 0.405 to 0.407-inches for the older pistols. He slugged the bores of examples of Remington double derringers in his own collection to prove that. He also measured the bullets in both old black powder cartridges and in newer smokeless rounds. Sure enough, they followed suit. Shoot a smokeless round in an older derringer and there is so much space around the smaller bullet that the pressure never builds. Shoot a black powder round in a newer derringer and — well, the pure lead bullet gets mangled on the sides but the pressure doesn’t rise above where it normally should. Either way the shooter is protected.

And this is why writers have said all that they did say about this old cartridge. So Brendan started experimenting. He pulled a bullet from a recent rimfire cartridge and it measured 0.401-inches in diameter. That will hardly work in a bore of 0.405 to 0.407-inches! But it’s perfect for a more modern 0.399-inch bore.

That brings you up to today and what I am about to tell you. I took the Remington derringer — a modern one made around 1923-24 — to the range with my box of 50 new/old .41 Rimfire Short cartridges. The price for those rounds? You don’t want to know! I will tell you that today a similar box goes for around $300.

This is a once-in-a-lifetime opportunity to shoot and evaluate both this firearm and the cartridge it shoots. So I did it. Does the small and light derringer kick so hard that it bloodies your hand? Is it accurate? How fast does the modern .41 rimfire bullet exit the muzzle of this extremely short firearm? Can it even penetrate enough to be deadly? One of the books I read said this cartridge was about as deadly as a .38 Special, but that was hard to believe. So I chronographed it. The first shot was a 135-grain lead bullet going 516 f.p.s. Shot two went out at 506 f.p.s. At 516 f.p.s  the bullet generates 79.83 foot-pounds of energy at the muzzle. That’s more powerful than a .22 short standard speed, but not as powerful as a .22 long rifle standard speed. Big whoop! But what does it do to the target?

I had a block of ballistic gelatin that’s used to test bullet and pellet penetration. The block is about 9.5-inches long, and I shot into the long axis, so that’s what the bullet faced. The bullet went clear through the block as if it wasn’t there. And the front of the block was peppered with flakes of unburned powder.

The .41-caliber bullet slipped through this 9.5-inch block of ballistics gel (arrows) at point blank range.

Ballistic gel is analogous to flesh, which means this bullet will penetrate deep if it doesn’t hit a bone. That is consistent with the reports when the correct version of his cartridge was used with the correct pistol. But I do want you to know that this block of gel was made to test airguns. It is clear ballistics gelatin but may not be as dense as other blocks made for firearms.

Here we hit a snag. I tried shooting at a 12-inch bull from 21 feet and my shot hit at the left edge of the paper — about 18 inches to the left of where I aimed. My second shot missed the paper altogether. Then I moved up to about 15 feet and was able to hit the target. 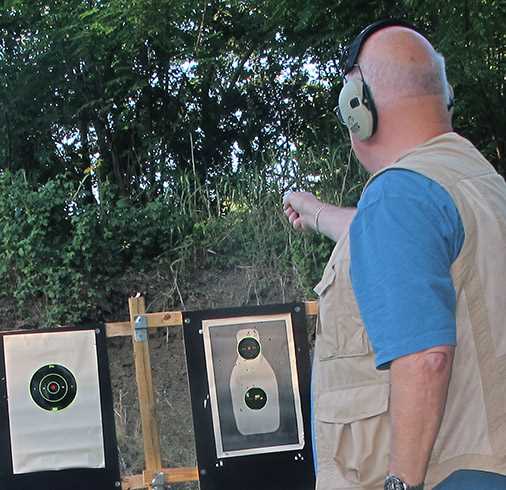 When I moved up to 15 feet from the target I was able to hit the target with the derringer. 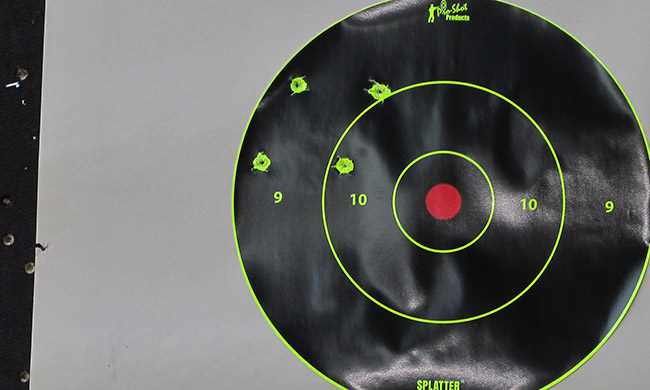 That’s six shots at a 12-inch bull at 15 feet. Four are in the bull with one on the left edge of the paper and one missed the backer paper altogether.

Now, a derringer is a very close range weapon — five to six feet. So yes, the pistol is accurate enough to do its job and no, it isn’t a target pistol.

To load the pistol the barrels are broken upward. 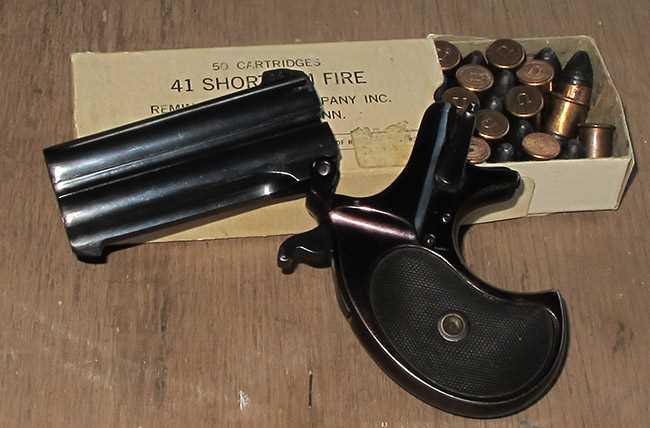 I was surprised to learn that the Remington double derringer is quite pleasant to shoot. There is very little recoil — just a pulse in the hand. It’s actually a lot of fun to shoot — though at six dollars a round I won’t be plinking with it anytime soon!

The hammer is hard to cock, but the trigger is smooth. The firing pin dents the rimfire case deeply and when you cock the second time the firing pin shifts to the second round. In about 20 shots there were no failures to fire.

To remove the expended cartridges the derringer is opened and the extractor on the left side of the barrels is pushed backwards. The cases come out of the chambers far enough to remove them easily.

I hope to be able to reload this cartridge and shoot it occasionally. Obviously store-bought ammo is out of the question. I don’t want to set myself up to reload hundreds of rounds, but reloading a few to shoot occasionally seems like fun. And you know I will show all of that to you as we go.

You have just read one of the most revealing tests of a Remington double derringer that has ever been written. You’ll find several You Tube clips but the information I have provided goes beyond most of them. There isn’t much on these little guys and I have just scratched an itch that was a half-century or more old. 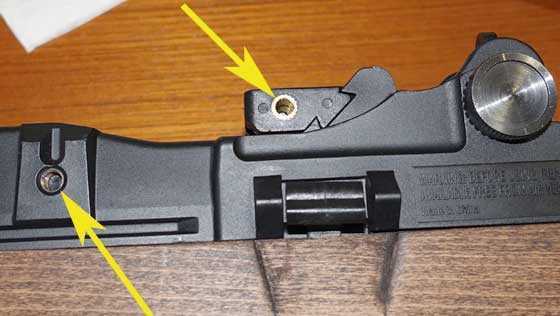