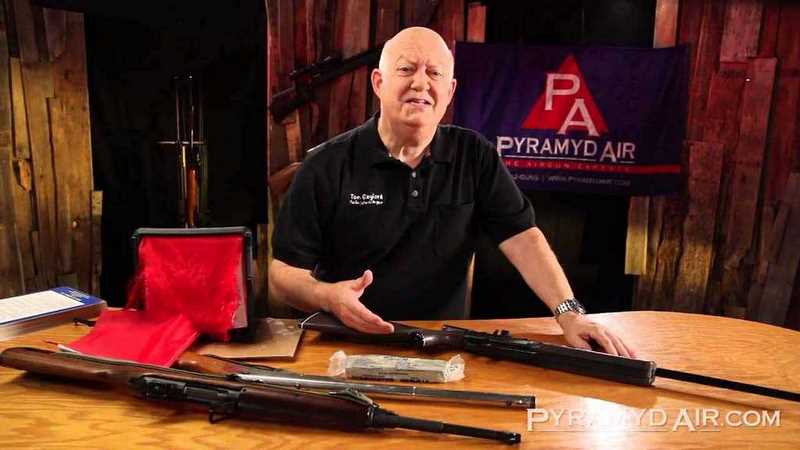 Today we test the first batch of reloaded .22 rimfire cartridges. There is a lot to tell so let’s get right to it.

I used a heavy steel bullet trap for today’s test. I needed that because I was shooting across my chronograph in my office. From Part 5 I had 28 cartridges loaded and ready to go.

The first cartridge failed to fire, so I loaded a second one — and so on until I reached the end of my loaded rounds. They didn’t work. So what went wrong? I will have more to say on that in a bit. Now let’s look at something different. 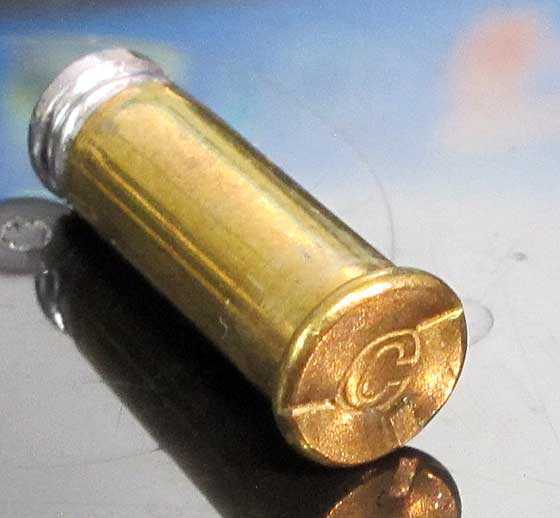 It wasn’t that I didn’t try! This case was fired originally and then twice after reloading.

You’re supposed to cut off the lighter colored tips of the matches and grind them into a powder. So I cut the tips off a dozen matches and stuck them between two pieces of paper so I could grind them safely. Remember, you are making priming compound that goes off when hit. You don’t want to set it off while you are grinding it! 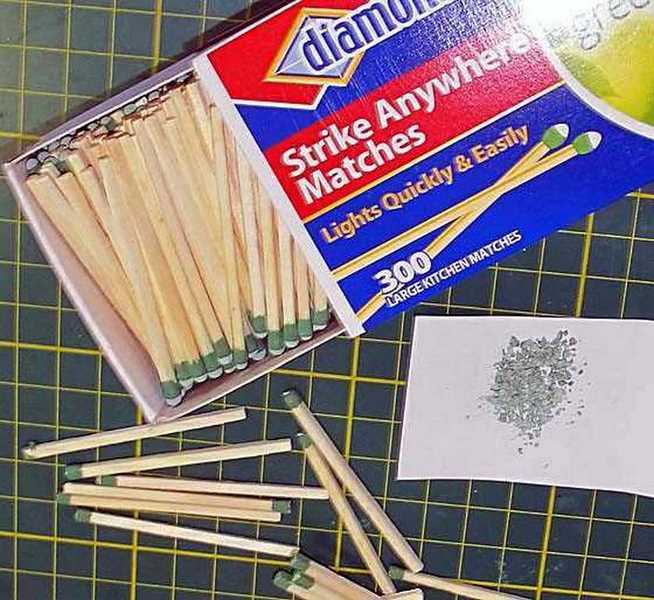 I bought strike anywhere matches at the grocery store.

When I had ground the match tips into a powder I took some of the powder out to the garage and put it on the steel jaws of my vise. Then I hit it with a hammer. Nothing. I hit it again, and again. Nada.

Then I tried lighting these “strike anywhere” matches on things other than the matchbox strip. Nothing. They wouldn’t even ignite when struck on a nail file!

The verdict is, American strike anywhere matches are a lie. I then learned that only recently was the compound of the match tips sold in the US changed to make them only ignite when struck on the side of the matchbox. So the Philippines has openly outlawed strike anywhere matches and the US has allowed manufacturers to lie about them. The ones I have are even hard to ignite when rubbed on the strip on their box! These that I have were made in Chile, and, to my enduring gratitude, the box assured me they were made with wood from well-managed forests. Imagine my joy!

Yes, it is possible to buy real Ohio Blue Tip strike anywhere matches on eBay. They are selling for around $15 a box, which makes no sense to my current project. Not only would it take many hours to produce enough priming powder for 50 cartridges, that many matches would also cost over $50!

The other material that’s widely advertised for making rimfire priming compound is the powder that’s found in toy caps. It makes little difference what kind of caps you use because the powder inside all of them is very sensitive. But the paper roll caps require a lot more work to extract enough powder for a cartridge than the ring caps — because there is more compound in each chamber of a ring cap than there is in those little bumps on roll caps.

I ordered some ring caps to try this for myself. The cap chambers are each covered with white paper that proved easy to remove. I used a sharp dental pick and, after the white paper was off and I could see the hard pellet of cap powder inside, I used the pick to break it up so I could dump it out.

Then I got the powder out of the next six chambers (there are 8 caps on a ring). The last cap blew up with all the powder and it was louder and hotter than the first one. Ouch! I say ouch, but I am also pleased that I have finally found something that I know works. 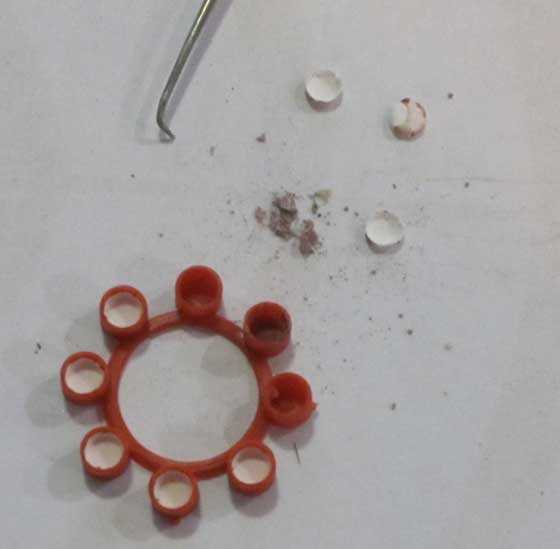 The first cap blew up with half its powder, so you’re looking at about 2.5 caps of powder. The powder is hard inside the cap chambers and comes out in chunks that must be broken up. 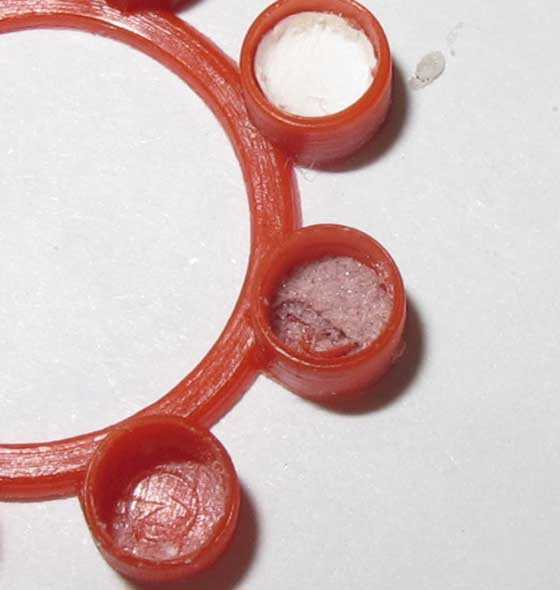 Each cap chamber has its powder in a cake at the bottom. The cake is always void on one side, as seen here.

I noticed that every cap chamber had a cake of hard powder at the bottom. All the cakes had a void on one side so I tried to get the dental pick underneath and pry out the entire cake. That’s what blew up the 8th cap! So pressure alone sets off this stuff. That’s good to know.

Grind up the powder

As you can see, the cap powder comes out in large chunks. To get the powder under the rim of the cartridge it must be ground up fine. Well, there’s a dilemma! How do you grind up powder that explodes from shock or pressure? Kinda like juggling nitroglycerin!

I took the powder from 6.5 caps and put it in a pile. Then I folded paper over it and used the smooth head of a hammer to gently grind the powder. This was done by turning the hammer from side to side — GENTLY! My neighbor, Denny, watched me do this and I think he thought I wasn’t really grinding at all, but the big chunks did break down into a powder. 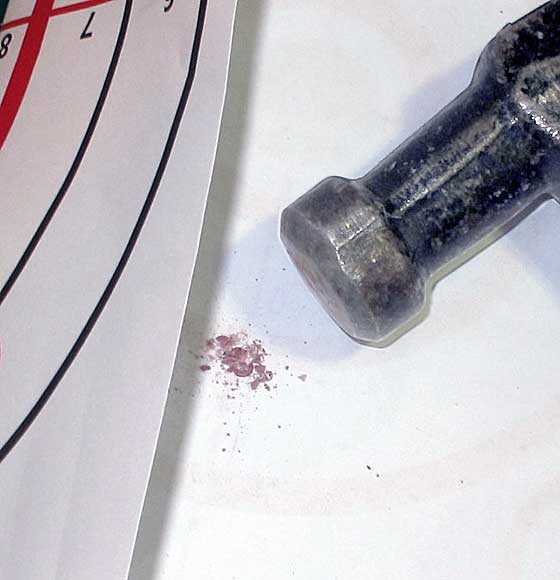 Fold the paper over the cap powder and SLOWLY grind the chunks to powder by a light side-to-side (circular) motion.

The power is poured through the funnel into the cartridge case and one drop of acetone is dropped on it. The acetone turns the fine powder into a slurry that can then be pushed into the rim all around the cartridge. The instructions say to wait 5 minutes after dropping the acetone in before pushing it into the rim. That is what I didn’t do the first time I loaded the 28 cartridges. I immediately started to push the priming powder into the rim, thinking that acetone dries very quickly here in Texas.

This time I waited 4-5 minutes before pushing the powder under the rim. I figured this step might have been the one that caused all my first cartridges to fail.

I carefully packed the cap powder into the rim of the first case and it went very well. In fact almost all the powder went into the rim, which was a problem the first time I loaded 28 cartridges.

But the second time I packed the priming powder it detonated and the fire from 6 caps worth of powder shot out the cartridge case I was holding in my left hand. It was loud and hot. I have no doubt that if there had been gunpowder inside it would also have ignited. The flame also lasted longer than when the individual caps blew up — perhaps 100-200 milliseconds. Double ouch!

So I cleaned that case once more and pried out the powder from 6 more toy caps, ground it and packed it — even more carefully this time. I now had two cartridges primed with toy cap powder. They were set aside to dry completely overnight.

Again with the commercial priming powder

I also tried the commercial priming compound a second time. I read the instructions once again and carefully mixed the four powders (see Part 4 for a detailed description). This time, though, I added a step that I hadn’t done before. When the powder was mixed I took a third of a small scoop that is the recommended charge for one cartridge out to my garage and dumped it on top of my steel vise jaws. Then I hit the pile of powder with a hammer and it did explode. Now I know for certain that this powder does work. Because of how I rushed into reloading the cartridges I didn’t know that for certain the first time around.

Then I loaded this priming compound into two more cleaned cartridge cases and waited the same 4-5 minutes for the acetone to dry before packing the compound under the rim. I wanted to make sure I was doing everything exactly as the instructions said. These two cartridges were also set aside to thoroughly dry overnight.

Rather than blundering ahead like I did in Part 5, I decided to test the four primed cartridges I had just made. So the next day I dumped one large scoop of Pyrodex replica black powder into each case. Then I packed a piece of paper towel down tight against the powder. Pyrodex ignites as easily as black powder, so, if the priming was successful this time, I just made 4 blank cartridges. Two are with the powder from toy caps and two are with the commercial priming powder. 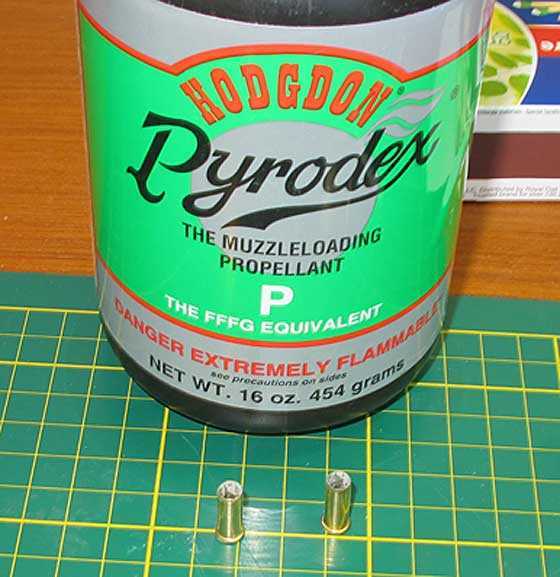 Pyrodex is a replica black powder that burns just as easily. Pyrodex P is equivalent to FFFG powder which is pistol powder.

Well, it worked! Perfectly! All four cartridges fired as planned. I now know that the priming powder I bought works when the instructions are followed to the letter. I also know that toy caps make a good rimfire priming compound — though they must be handled with kid gloves.

I tried to post a video of two of the four cartridges firing on my You Tube channel but it was declined several times by You Tube with no precise explanation other than it was a “bad request.” According to what I see I may have to upload it a different way. I will look into the matter further.

I now know that the powder from 6 ring caps is enough to prime a .22 long rifle cartridge. I also know that the 1/3 of the small scoop of commercial priming powder is right, too. The “secret” seems to be waiting the 4-5 minutes for the acetone to partially dry after adding it to the priming compound before you push it into the rim of the cartridge. I used a wooden “strike anywhere” match stick to push in the last priming compound from the toy cap, because they had been set off by pushing with the small end of the metal cartridge case rim cleaner that the reloading kit suggested.

I am taking my time doing this research and documenting every step in the process. Those You Tube videos that show reloading rimfire cartridges gloss over everything and make it look like it is a 5-minute exercise, when it is really many hours of trial and error with a few mistakes along the way. I’m certainly making many of the mistakes. But the goal is and always has been to determine if it is possible and worthwhile to reload .22 rimfire ammunition. I now believe that its possible, but I’m quite a ways from knowing whether it is worthwhile.

Just to keep you completely informed I am also looking into reloading .32 rimfire and .41 rimfire. Those cartridges are no longer made and there are some wonderful firearms that shoot them. I will report on both those cartridges, but first I want to run the .22 long rifle cartridge to ground.

I think I need to cast some more bullets for these cartridges and the next time I need to cast good bullets. It may take us some time, but I want to know how to do this right.