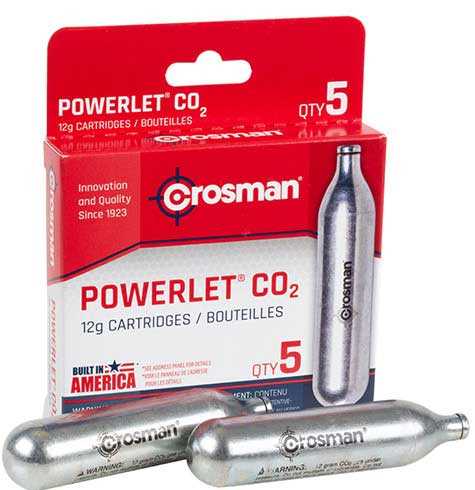 Today’s report was suggested by reader hihihi, who, in a comment to last Friday’s report about the Giffard CO2 rifle said, “Maybe I’ll find the answer to whether it can be made to work on the little 12 gram CO2 bottles? “ I will answer that right now. It can. And in this report I hope you learn why.

The power is the same

Whether you are tethered to a 5,000 liter tank (nice use of metrics there, guys) or a 12-gram CO2 cartridge that holds one five-millionth the amount of CO2, as long as the temperature of the gas inside both vessels is the same the pressure from both sources is identical.

Without getting scientific, think of it like this. CO2 is like gasoline. A car that goes 100 miles per hour will not go any faster if there is more gas in the tank. It will go FARTHER, but not faster. It’s the same with CO2. In a gun powered by this gas the amount of gas determines the number shots — not how fast those shots will go.

While I was researching the Giffard I went to the online NRA museum where I discovered this writeup with their Giffard rifle:

“Later, Giffard organized the Giffard Gun and Ordnance Co. in London, England. The original French-manufactured designs featured a cylindrical steel reservoir which was closed on one end, while the other end contained a valve. This reservoir was pressurized to 4,000 p.s.i., which permitted the shooter to fire between 40 and 60 shots. A hammer-and-rod system was used to open the valve on the CO2 reservoir, releasing gas which then traveled to the chamber via an internal channel. Pressure could be regulated for long- or short-range shots via an adjustable hammer stop which lengthened or shortened the time period in which the gas reservoir remained open. Giffard’s British subsidiary manufactured an improved lever-action hammerless version of this gun that featured an octagonal barrel and a counter for tracking gas usage.”

Too bad that is impossible. You see, CO2 doesn’t work that way. CO2 pressure depends on temperature. It cannot be pressurized above a given pressure at any given temperature. For example — at 70 degrees F. CO2 maintains a pressure of 854 psi. If the space is the vessel in which the CO2 is contained is reduced, more gaseous CO2 becomes liquid and the pressure remains the same. If the space inside the vessel is increased, such as from a shot that uses some of the gas, some of the remaining liquid evaporates to become gas and the pressure remains the same.

The pressure inside the vessel never changes. CO2 is therefore a self-regulating gas.

So why did the NRA say the CO2 is pressurized to 4,000 psi inside the Giffard? Simple. They copied literature from their own American Rifleman magazine, published in an article in the June, 1971, issue that talked about the Giffard. The author, Elliott L. Minor, based his writing on a Scientific American July-December 1893 supplement. The author of that publication apparently had no idea of what was what and just guessed. People will do that. In the 19th century Jules Verne, the French science fiction novelist, supposed that the Earth’s moon was actually a burned-out star (as he wrote in his novel, The Mysterious Island). 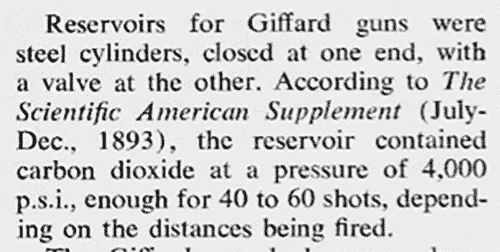 Excerpt from a June, 1971, article about the Giffard in American Rifleman magazine.

If you have spent any time shooting CO2 guns you have noticed something that proves what I’m saying about the liquid flashing to gas. When you first pierce a CO2 cartridge the first one or two shots will be significantly more powerful. That’s because the CO2 liquid in the cartridge is flowing through the gun’s valve and flashing to gas either there or inside the barrel. In other words — more gas gets out. A chronograph will show this and you can hear the difference in the gun’s report. After those shots the gas settles down and flows as gas only through the valve. That is why a CO2 gun maintains its velocity for the length of time that any liquid CO2 remains in the cartridge.

When all the liquid has turned to gas the velocity of the gun starts dropping. Some people think the cartridge is simply venting gas from start to finish, but that’s not the case. As long as there is any liquid remaining it evaporates and turns to gas at whatever pressure the temperature of the gas allows — it self-regulates.

CO2 sublimates — at sea level air pressure (about 14.7 psi) it changes from a solid directly to a gas without becoming a liquid. In other words, it doesn’t melt. You can see the effects of the gas as it comes off the dry ice as a water vapor, because it is so cold that it makes water in the atmosphere turn to vapor. The CO2 gas itself is invisible, but the water vapor it creates gives it away. To actually see dry ice (solid CO2) turn to liquid CO2 you would need a transparent vessel that could withstand the enormous pressure that’s generated when this happens — remember 854 psi at 70 degrees F?

As the ambient temperature drops, so does the velocity of a gas gun. The reverse is also true. But there is more. As you shoot, the gun cools down internally from the expansion of CO2 passing through. On some guns this affects the velocity drastically. Others are less affected. A chronograph will tell you what your gun does.

One more effect of CO2 is the gas cools rapidly! So when you exhaust your cartridge after a shooting session, the temperature of the gas is low enough to promote frostbite. In fact, CO2 was considered as a gas for use in the first air conditioners until it was discovered that the gas cannot be returned to a liquid state without a lot of expensive machinery that affordable air conditioners don’t have.

CO2 gas is comprised of molecules. One carbon atom is bound to two oxygen atoms. Molecules are larger than atoms, and therefore CO2 moves through the valves in airguns slower than the atoms in air. That’s why CO2 cannot rise in velocity or power beyond a limit. To get greater power, a projectile of heavier weight can be used. The airgun called COTooMuch shot a projectile that weighed more than 7 ounces. It was propelled up over 400 f.p.s. and therefore generated a little over 1,000 foot pounds of energy at the muzzle.

Well, that’s it. That’s what you should know about CO2. Of course there is a lot more to know, but these are the basics for airgunners.