Regular blog reader Fred of the PRoNJ has done a lot of testing with his Benjamin Marauder. Today, he’s going to tell us what he’s been doing to get better accuracy and more consistent velocity when shooting the gun on lower-pressure air.

Guest bloggers must be able to provide clear photos and size them for the internet (if their post requires them), and they must use proper English. We’ll edit each submission, but we won’t work on any submission that contains gross misspellings and/or grammatical errors.

By Fred of the Peoples’ Republick of New Jersey 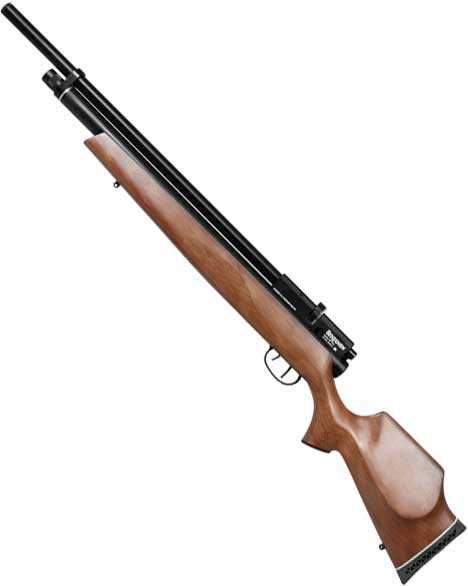 Perhaps the most accurate rifle I own is the Benjamin Marauder. The rifle has a lot to offer for the money, including dual propellant capabilities; a two-stage, adjustable trigger; and a choked, shrouded barrel. Plus, it’s a repeater (10-round magazine included). It’s so quiet, you hear the hammer striking the pin on the release valve. The biggest complaint seems to be that some people don’t like the sound that this makes, which is a ping.

The rifle, as shipped from Crosman, is said to be adjusted for the best compromise between using 3,000 psi or the low end at 2,000 psi. As I determined what pellet the rifle liked the most, I knew that my testing wasn’t complete until I broke out my chrony to see exactly what the rifle was doing. I bought this rifle because I like the idea of shooting it at 2,000 psi — the same as my Discovery. I own an old steel scuba tank and its maximum working pressure is 2,300 psi so having two PCPs working at 2,000 psi seemed ideal.

First, I shot my rifle to get a benchmark of what it was doing as sent from the factory. Using a .177 cal., 8.85-grain pellet (I have plenty because I discovered it wasn’t a very accurate pellet), my initial muzzle velocity registered 855.8 feet per second (fps) or 14.4 ft.-lbs. However, by shot 10, my velocity had dropped to 804.5 fps. That tells me that I didn’t have 10 shots at a starting reservoir pressure of 2,000 psi without a huge velocity spread. Here are the chrony results for my baseline:

As you can see, it’s a nice, almost linear, decreasing velocity but really not what you’d wants. The Marauder has three adjustments. One is the hammer-spring preload, the second is the hammer-stroke travel and the third is the valve-metering screw that controls the amount of air entering the barrel and adjusts the pellet velocity. However, to reach this third adjuster, you have to remove the stock and a jam screw to access the adjusting screw. I decided to just adjust the first two, which are easily accessible at the rear of the breech. 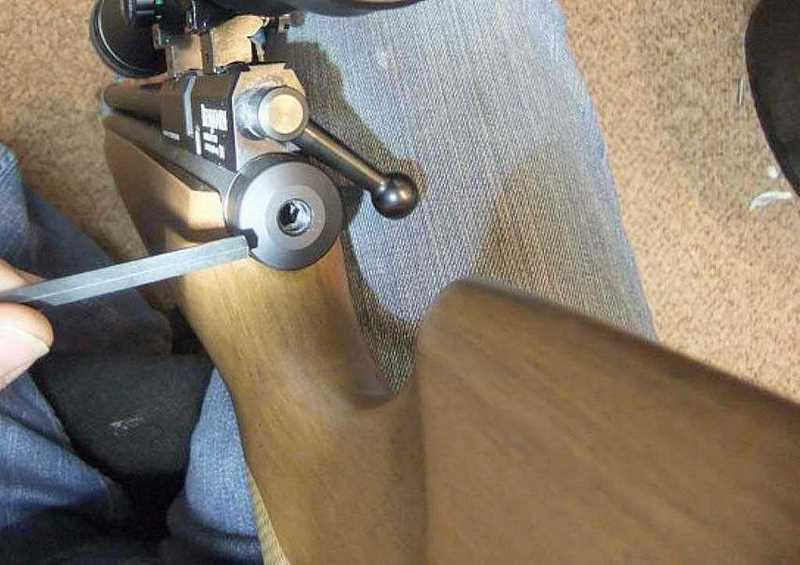 Marauder breech: the hammer-stroke Allen bolt is a smaller size and located in the center of the hammer-spring bolt

I turned the hammer-spring preload counterclockwise to reduce the preload by one turn and turned the hammer-stroke adjuster also one turn clockwise to reduce the travel of the hammer. I decided to increase the air pressure in the rifle to 2,100 psi. My initial velocity increased to 867.1 fps. The second pellet was a bit faster, but by shot 13, I’d exceeded a 25 fps spread, with the crony reading 841.5 fps. I’d gained 3 shots, not taking into account the higher starting pressure.

For the next test, I again increased adjustment by one turn on the two screws. This achieved minimal results so I increased the adjustment by two turns for a total of 4 turns from the rifles’ initial setting. With an initial velocity of 863 fps, I started to obtain some strange results. The next 3 pellets had higher speeds before dropping down below the initial fired pellet. Rather than show you another table full of numbers, take a look at this graph: 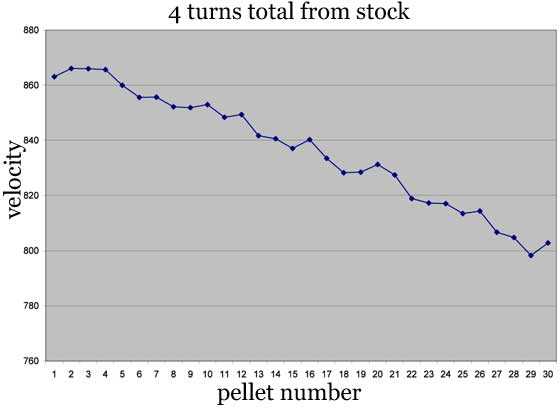 Notice what’s starting to happen? I didn’t pick up on it till a day later when I had time to think things through. However, using my limitation of 25 fps spread, I was at 21 pellets now.

The hammer spring has about 6 turns of adjustment, so I turned this fully out to get the least pre-load on the spring and reduced travel on the hammer stroke. In my desire to make a miser out of my rifle and obtain the most shots per charge at 2,100 psi, I missed what was happening and adjusted the striker travel further so that I had only two turns of adjustment left. 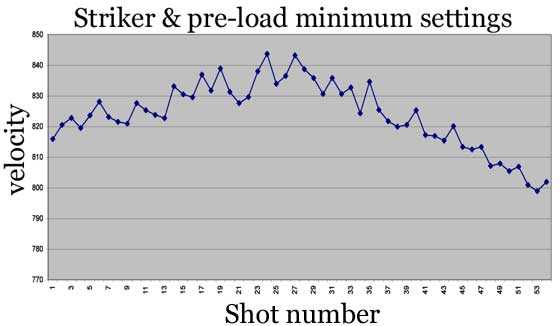 Take a look at this graph and things become clearer. My first pellet’s speed is 816 fps. Subsequent pellets increased to a high of 844 fps and then started a decline in speed so that by shot 54 I was at 801.9 fps. I might be able to live with this spread of 43 fps knowing that I could get 54 decent pellets from a 2100 psi charge since the average speed for the 54 pellets equates to 824 fps and is +/- 25 fps. But, I decided to try to remove the valve-lock issue.

I turned back the hammer-spring pre-load clockwise one turn to increase hammer energy. Now, my results produced an initial or first shot speed of 876.9 fps and rose to 890.6 fps by shot 12 for an increase of ~14 fps from the initial velocity. From this point, velocities dropped until pellet 42 produced 850.9 fps, or not quite 28 fps difference from the first pellet. However, as you can see from the chart below, a number of pellets had dropped below this speed. 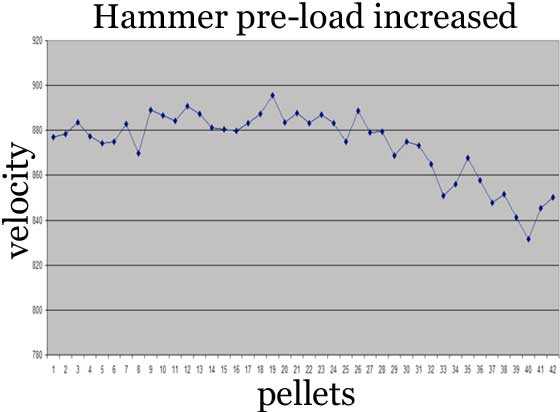 My average speed for these 42 pellets is 878.4 fps. In energy, that’s 15.17 ft.lbs. This is in comparison to the average velocity of 809.8 fps, which equates to 12.89 ft.-lbs. It’s a tough decision. I can accept the minor valve lock, get 54 pellets per charge and a little over 2 ft.-lbs of reduced energy OR I can reduce the valve lock, increase my average speed by 25 fps and get to shoot 38 to 42 pellets within a tight spread.

Would there be a difference in accuracy with the valve-lock issue? 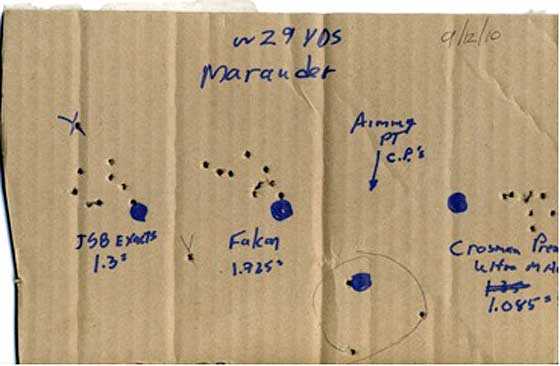 Testing the Crosman Premier Ultra Magnums (10.5 gr) against the Falcon (7.33 gr) and the JSB Exacts (10.35 gr), Here’s what the rifle gave me with 2,000 psi starting pressure and the factory adjustment.

You like my target, I take it? This was done to see if the JSB Exact Diabolo pellets and Air Arms Falcon pellets were more accurate than the Crosman Premier Ultra Magnum pellets that I’d determined were the most accurate in this rifle. I hadn’t adjusted the scope to zero in on my point of aim, but you can see what was giving me the best results.

The Premiers gave me a 1.085″ group at 29 yards. JSBs were 1.3″ and the Falcons a 1.725″ group. I also noticed that the Falcon and JSB pellets would shoot to the left of the target while the Premiers went to the right.

After adjusting the scope for the Crosman pellets so they would be on target, I shot the Marauder at the “miser” settings, accepting valve lock. See for yourself what this rifle did for me at 30 yards. 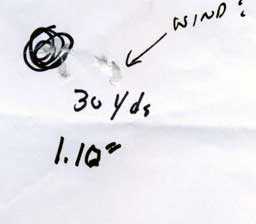 This is the Crosman Premier Ultra Magnum pellet. There was a gusty wind blowing on this day, and I had to wait between gusts (but sometimes I wasn’t quite patient enough). These measurements, like the cardboard target, are the full measurements of the group — they aren’t center-to-center. The target is also one yard farther away.

Now for the Falcons: 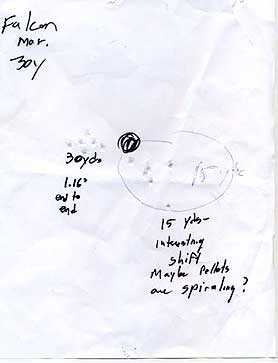 The pellets to the left of the POA were shot for accuracy, while the pellets on the right were shot as part of another experiment. Did the Falcons spiral on me or did the spin imparted from the rifling cause the pellets to drift left? More experimentation is needed. Finally, the JSB Exacts: 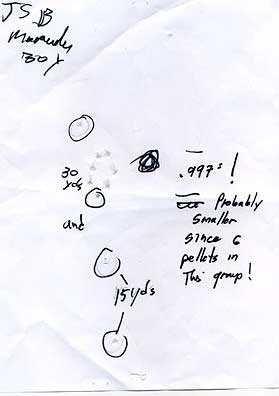 Ignore the comment about this group being smaller, as there are 6 pellets in the group. All the groups had 6 pellets. The circled holes are pellets shot from 15 yards away. Again, this was an experiment to see if the JSBs would move from side to side if the distance from the rifle to the target varied. Careful sighting was not conducted here, only general sighting for this experiment. Obviously, there’s no problem with these pellets traveling side to side.

I’m going to leave the rifle adjusted for the higher velocity and have 44 useful pellets and more power as opposed to 54 pellets and less power. Now, it’s time to get the Discovery out of the closet and see what that rifle does.