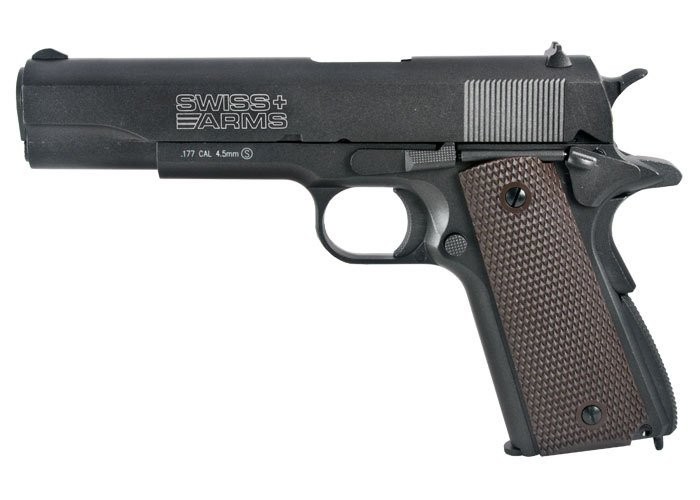 I had been searching the internet for a nice 1911 replica and finally found this. I am a US Army veteran (1st Cav. Div. Armor 1st/7th {Garry Owen} and was trained with the real thing. You can believe this, you will not find a better replica and considering the fact that you can shoot with it is icing on the cake, and the blowback function is a real hoot. Before it arrived I had been considering painting and weathering it, but the stamping on it is so subdued I changed my mind.( Not nearly as bright as in all the pics.) I just don't have room to say everything I would like to say about this gun but take it from someone who knows the real thing, you will NOT be disappointed.

Maybe an extra magazine but it's not a deal breaker.

Don't expect to drive nails with this gun, but if you are familiar with the actual thing you know that you don't aim a 1911 you point it because the real gun probably isn't as accurate as this one is.

Was impressed with the realism compared to my 70 series 1911 Colt, that I bought new in early 1960's, which also has identical plastic grips from the factory. Field strip and reassembly is almost identical. Was very impressed that there were no casting lines or flashing. At a few feet away practically indistinguishable from a real Colt except for the white lettering and the gunmetal matte finish. If it were made of steel vs aluminum and able to be blued would be identical looking. The weight and balance is very close to my 45 Colt.

Make the internal parts that have high wear points out of steel. Change the clip so would not have to hold the spring loaded carrier when loading. An easy modification with a Dremel tool that I made, and reduces the max capacity by two B-Bs. Accuracy inside a three inch circle at twenty feet,if there were no flier's would be comparable to my 45 Colt. I tried four different types of ammo, and I could not really see much difference, which is to be expected with a smooth bore. Trigger pull is very good with little creep.

Blow-back operation very realistic. Even has the same potential for hammer and slide bite if not held correctly when shooting just like the original. I bought this gun for training others in proper handling,firing,etc before moving to a real 45 caliber 1911.