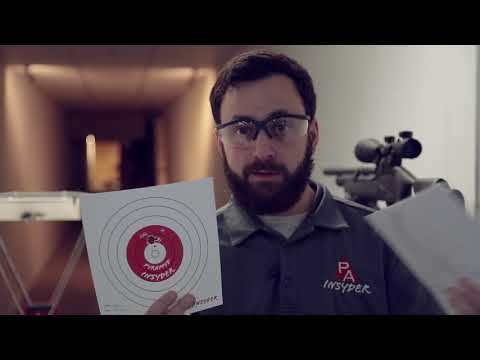 If you've wanted to enter the world of PCP airguns but price has held you back, make a bolt for the buy button and make the Flash yours!

Welcome to the Pyramyd Insyder, I'm Tyler Patner. Today we're gonna be taking a look at a brand new one just announced to SHOT Show 2018--the Hatsan Flash in 22 caliber.

So because this gun's called the Flash, we're gonna do the world's fastest review today. All right, lets start at the muzzle(*Sped up Speech*) Just kidding so the Flash was announced at the 2018 SHOT show. Basically Hatsan's answer to the Umarex Gauntlet and the Diana Storm Rider, a $300 pcp. Quite frankly, this was one of the guns that I was most excited to see because Hatsan is gonna bring you a powerful $300 gun as opposed to most of these 22s that are like 22,23,24 foot-pounds. This is gonna be a full-bodied 22, I guess you're talking about having 30-plus foot-pounds at your disposal, what that's going to do to the shot count of course we're gonna find out, but let's go over some of the features of this Flash. So starting at the front of the gun we do have the QE system, so you have this kind of integral suppressor as well as a full shroud system. Should keep things pretty quiet, pretty backyard friendly for all you guys looking to do some backyard pesting or just general target shooting in the backyard. Dropping down, we do have a, I believe, it's about 165 CC air cylinder here so a little bit smaller than most of their cylinders on the Hatsan guns, and it is fixed you can't screw it off and replace it with a new bottle. Not a big deal to me, you do have your standard fill probe here that comes with all of the Hatsan guns and it is threaded on the end of 1/8 BSPP, so you are going to need a quick disconnect fitting if that is what your fill system needs. And that just slides right into the fill port. Doesn't come with a dust cover Hatsan's usually really good about that, I'd like to see them include one, you know just something to put in there when your fill probe isn't in the gun, but not the end of the world for me. Gun fills to 200 bar which you can see on a gauge on the underside of the stock you got some nice color coating there. So 200 bar about 2,900 psi and talking about the stock here, it is full synthetic, it has a pretty good feel to it but it is going to keep things very, very lightweight. This gun's coming in at six pounds. This is exactly what I've personally, we been wanting to see from Hatsan for many years now. Their guns, in my opinion, needed to go on a diet and the Flash has been put on a diet. They introduced this guy to Jenny Craig and he is a pleasure to deal with at six pounds. Very nice, pointable, the thumbhole skeletonized stock here is just really easy to get along with in my opinion, it's gonna fit most hand sizes without a problem, and just feels really good like it's a nice solid feeling gun that's not too heavy and not too bulky, and at 42 inches long you're not gonna have a problem carrying this around with you. So another thing that is featured in this stock is a little Picatinny rail section here if you did want to mount a bipod or something like that. I love that you know just the ability to quickly mount a bipod is always nice in my opinion. On top of the breech, we have Hatsan standard weaver, 11-millimeter dovetail scope rail, which at this point is kind of you know, it's their standard and it works. I prefer to use dovetail mounts on these rails just because sometimes the Picatinny weaver sections are a little weird, so we went ahead and mounted a UTG 4 - 16 by 50 scope here on top. On the side of the action here we do have a side bolt operated system very similar to what we've seen on the Gauntlet but it kind of pops back on its own, not too hard to pull back and does go down into that slot. You got two 12 round magazines with these, is the same as the mags on the BullMaster and the Barrage, so you can just slide them in there and you're good to go. 12 pellets will do all 12 shot groups when we're out on the range for you guys and the gun does also come with a single shot tray which again, little value-added features that are always nice. So when you go ahead, you cock that back, you're gonna go ahead, you don't have to drop it down when you're just loading the gun but you do when you're gonna take the mag in and out, and you're just gonna rock it forward and you're good to go. If you do want to de-cock the rifle, you just hold it back there pull the trigger, you hear it kind of pop and you're good to go and you're all safe. Another big upgrade, kind of an upgrade I guess in my opinion, that Hatsan has been long needing is a non-automatic safety. So we do have a manual safety that's really conveniently placed for the right-handed shooters out there, you just flip that back it's on, safe, flip it forward, you're hot and ready to go, and the Quattro trigger, so this should be a very very good trigger, may need a little adjusting out of the box for you but it is very adjustable. The Quattro is really nice, think this one is breaking about three pounds doesn't have too much take-up which I like, and comes to a fairly clean wall so it's a nice little trigger that you're going to be able to get along with whether you're a hunter or a target shooter without a problem. So let's head out to the range and see what this Flash can do.

Alright, guys, we tested pretty much every pellet we had at our disposal, probably somewhere in the 15-16 amount of pellets. That said, we narrowed it down to three in our pre-testing that did quite well. The results were okay you know for most, so you got the Crosman Premiere domes which is a pretty affordable pellet. All twelve shots and these are twelve shot groups inch and a quarter for all twelve you cut out that shot right there, which was my first shot so probably a me problem there, and you got 11 shots in a one inch group which is certainly not too bad out at 45 yards. Moving it in the Barracuda Powers, which is a very heavy pellet, you got a 21 grain pellet, they're gonna give you a lot of energy, puts all 12 in about an inch and an eighth and again 11 of those 12 are gonna be in a one inch group there, which is again pretty solid. But definitely the best, those JSB 15 point eight nine five-eighths group 12 shots out of a $300 gun, high praise in the accuracy department for the Hatsan Flash.

So looking over these chronograph results with the Hatsan Flash, it's kind of what I expected, especially with the 16-grain pellet. About 30 foot-pounds of energy and that 20 shot average at 925 feet per second is definitely cruising along with a 16-grain pellet. It's producing good accuracy but really if we're looking at the tightness of these velocities you're talking about getting one mag so 12 shots maybe 15 shots in a kind of a usable velocity range. If you're shooting out 250 yards or more, if you're using this gun for tighter ranges than that, not going to see so much of a change. But really guys you're buying a Hatsan Flash because you want to do some serious hunting with it, not because you want to be shooting all day in the backyard. This is going to be the 300 dollar gun that the serious hunter is going to be able to get behind and use effectively.

Alright guys so I got to say very impressed with the Hatsan Flash, it's really everything I expected it to be. It's quiet, you got a solid trigger, it's not gonna require too much fiddling out of the box, and if it does it's relatively easy to do. 12 round magazine so you get a few more shots per mag for those of you guys that are hunting with this gun. Reliable bolt-action system and it's got good power, pushing a 16 grain pellet basically at 925 feet per second averaged over about 20 shots, this is gonna be really good for you hunters out there, 30 foot-pounds of energy a 5/8 group at 45 yards absolutely phenomenal over 12 shots. Got to see a dust cover in that I'd really like Hatsan to put that out there, but overall I really can't find too many gripes with this gun if any at all. It's lightweight, which is a godsend from Hatsan, thank you very much. Quiet, accurate, you got the multi-shot system, they did everything right with this $300 PCP and if you're looking for more power, you got a 25 caliber option. If you're looking to do some target shooting exclusively, you got a 177 option as well. Whether you're just getting into PCPs or if you're looking for a gun to knock around with in the woods, the Hatsan Flash is gonna be a really good choice for you, so definitely check it out next time you're on Pyramyd Air. Don't forget to click that subscribe button, stick with us through 2018. There are a lot of cool new products we're gonna be taking a look at, I am very excited for all of the things that we're gonna be seeing in the 2018. Lots of cool new stuff coming your guys' way. Don't forget to like and comment down below tell us what you thought of the video, and what you guys want to see next. For the Insyder, I'm Tyler Patner, we'll see you guys at the next one. 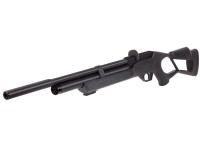