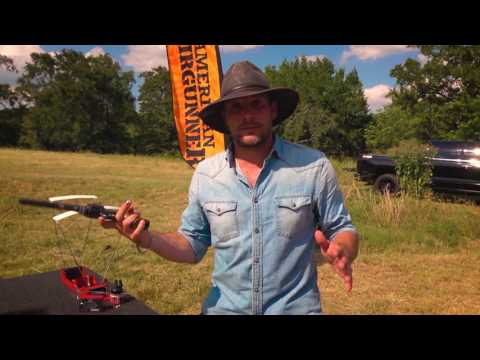 This airgun 6-shooter is an authentic replica of the famous Schofield No. 3 designed by Army Ordnance officer, Major George W. Schofield of the 10th Cavalry.

Dance! That right there, I'll teach myself to mess with me myself, you know what I'm saying, just don't mess with me when I got my six-shooter. Hey, guys, welcome to the Pyramyd Outsyder. Today we are looking at the Bear River version of the Schofield number three. Now this is an old western gun, the 9th of 10th cavalry to be used back in days, it was actually invented, to put together by an Army General, so this is actually an army gun, but it was, it's got a couple cool features, and and specific features, for reasons why they used it and loved it in the Old West.

First of all, look at the gun. You got this this nice gunmetal color here. I got the wood polymer grips. There's different colored grips and ivory grips, different color guns are. They can go silver, maybe smugglers, I'm not exactly sure, but this is the one I picked. I think it looks cool with real, it's got a genuine cocking, single fire hammer right there, so you've got a cock it to shoot it. You can't just pull the trigger, got a cock it to shoot it just like that. It's also got, they've a cool feature that the reason it does this is because back in the old days in Old West when they were riding on horses, guys used to love to use it because when you cracked it open like this how all the shells would pop out and they would or you could just pull them out really quick, so this is a, this is a feature that not a lot of six-shooters had. You're used to seeing the little door open up on the side, you got to do it. Well, when they were riding horses and you can just, yep, there you go, they pop out just like that, you are good to go. So, this was something, this is one of the reasons they loved it and this is a gun has it right here so cool this is one of those cool features we've seen this before in some of these replicas BB guns, but yet they've got, that they've got the realistic looking bullets here. You put, the you put the BB in there in the end and then you get to load it just like this and then when you shoot, cock and shoot, the hammer works just like a real single-shot revolver, the cylinder moves when you cock and move to the other different BB, you got six shots and then you reloaded and, of course.

Let's take a look here. So, you load it, very simple, crack it open, just take these, take the bullets out here, and I call them bullets because they are genuinely replica bullets, but, you know, it's loaded up just like this. There's two ways to do it. Some people do it like this. I prefer to do it like this, just pick them up, just like that boom, boom, you know, get organized, snap them down just like that, and you are good to go. Big clicks up like this, did you go a little bit further, it goes down so then you can just drop them in like that just in case you're worried about dropping and, you know, you lose them you're kind of SOL, so make sure you hold on to your bullet. So, you actually can't shoot the BB, so of course this is the co2 powered revolver. It's got your got your tool right there so, you know, you pop it in there your co2 cartridge, tighten it up, handler goes back on, and you are good to go now. Now that it has the BB’s in it, it is ready to go, so if you pull that hammer back and fire, it's going to shoot.

Let's just look and see what kind of feet per second. I think they're saying like 450 or something like that. 233. 233. 226. 215. Alright, so there you go, so you're mid 200s, 213, 192, so that actually dropped off quite a bit. I could be low on on air right now. I've been shooting a lot of that, I had a show down there at high noon earlier, dance, and I was getting to the end of my co2 cylinder, so I just put a fresh one in. Let's take a look one more time, see we got. 364. So, there you go, right out of the gate, you're gonna get, you know, mid to high 300s, as you lose the co2, you're gonna get, that's probably at this point, I'd say one twenty twenty-five shot, that co2 starts to touch, start to diminish and just going to get hit, it looks like mid to low two hundreds. So, we got some targets. I mean, listen, guys, this is a pistol. It's a six-shooter. It's a BB gun so you're gonna be close. You get to work on your speed. I mean, I got some targets there, but you know what I want to work on is is it speed, how quiet, how fast can I can I draw and shoot. You can't fan the gun. There's no, even if you hold down the trigger like that, you can't move the hammer which is kind of annoying. I really like to fan the gun. I'm not gonna lie to you, I like to just hold it where you hold the trigger fan and you just pull the pull the hammer back and go as fast you can so you can do that and there is a safety right here which obviously was not a part of the original gun. So, right here that's safety so then you can't can't cock it. If you can't cock it, you can't shoot it so you want to make sure that you're off the safety, but other than that, I mean, this is realistic, it's heavy, it's got good weight, you know, when I said, like I told you, you all you're wanted to, I don't want to do a spin and learn how to twirl, so here we go. Let's take the shot to see what kind of accuracy we got.

Alright, guys, so go to pyramydair.com, get you a Schofield number 3, and show me your spinning and twirling and holster and techniques. I want to see what you got, see if you got what I think I've got, you let me tell you something, they're only 100 bucks so everybody should have one. Alright, thanks for watching the Pyramyd Outsyder. 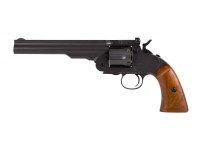 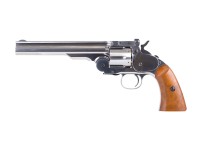