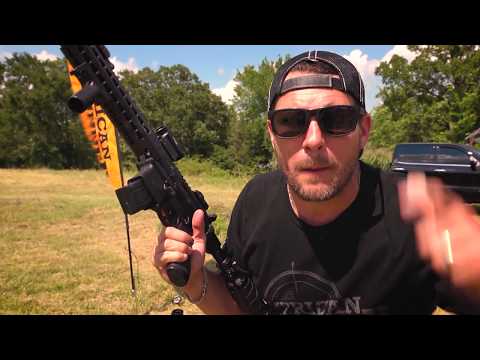 When it comes to semi-auto pellet airguns, does it get any better than a SIG Sauer MCX? Rossi converts the MCX to a PCP with the Air Venturi HPA Tank and gets some serious trigger time in this episode of the Pyramyd Outsyder.

"I got a Sig MCX, I got thirty rounds, I got a bunch of targets, oh here we go. Let's roll. Ah, that was like 40 targets! There's only three standing. Welcome to the Pyramyd Outsyder, this is the Sig MCX. Hey, what's up guys? Welcome to the Pyramyd Outsyder. Now this is a cool, cool very cool, very intimidating, very bad mama jama looking rifle. The only thing that's disappointing in this rifle is it's not as big it as bad as it looks to be honest. It's a .177, nothing wrong with .177 other than the fact that it's just a .177 small caliber, but a lot of fun. This is a very fun rifle to shoot, but first of all, let's take a look at it. It’s co2 powered. It is semi-auto. There's a 30 round rotary mag so it's like it's like a little magazine, I'll show you as we move through it, but first of all, let's take a look at the gun itself. Obviously, it's very tactical looking as you would expect from Sig Sauer. Sig Sauer recently gotten into the airgun market and they're putting out guns that are just, they're just awesome looking, so I mean these are the kind of guns I wish I had when I was a kid to go out and play with and, you know, hunt small game and shoot target stuff because they just look awesome. It has a metal housing so everything in here in the component side is metal. It's tough and it's built right. You've got your safety right here. It's kind of got that AR look to it if you will. It's got the pistol grip. It's got the magazine here. I'm over on the back side, push, it pops open and as you can see this is the the magazine, let me just pull it out and show you, so it holds thirty thirty pellets, like I said, it's slightly, you load it up it's already loaded, but you slide it in to rotor, it just moves like this and you fires, you know, as fast as fast as fierce as you can you got the thirty rounds. It's got, it's got the the handle up here, a little grip you can move this around, you can also remove it if you just want to hold it, up here on the on the front of stock it's got the Weaver row back here for the optics. It's got the Picatinny rail up here where you can put all kinds of stuff. It's got a look at the rear and front sights pop up and down so you can use those. It also comes with the Sig Sauer airguns red dot sight that goes on the top there to make it even cooler. On the other side, I mean, it's got all the I'm not everything works, you know, like normal all this stuff doesn't flap open, you can't push this stuff view, but it's it's there when you when you load it, you rack it just like you normally would with a with a semi-auto rifle. Other than that's it, you know, the basic rundown of this gun is you pop this off the battery little you know just release it there and then you plug an 88 or 90 gram co2 capsule in there. The bigger capsules in this slides over the top of it and gives it that look. I don't have those because I don't love those. Those 88 grams co2 cartridges are expensive and you don't get near as many shots as you should so what I am going to do with this gun, because it's what I try to do with all co2 rifles that I can, is it doesn't look as cool so I want you to take it in this is the Sig MCX we're gonna change it a little bit now. We're going to pop this up and Air Ventura has come out with this 13 cubic inch tank that you can replace co2 cartridges with this and put 3000 psi into this gun. This thing is regulated in to 1,100 psi so from 3000 to 1100 you're getting a regulated shot you're gonna get a tremendous amount of more shots from this than you are from a co2 cartridge. You'll always know exactly how much air you have, comes with this little adapter. It's pretty simple.

So, you want to screw this in and then so from what I've learned it's best to kind of screw in what is the adapter and then you should over screw this guy in. Okay, and then it comes with this little butt pad you can just throw on so you can have the same effect of the rifle, so, you know, it's a little bit longer than this, it's obviously not near as cool, but I mean I just turned the co2 gun into a pcp now I've got this male quick disconnect I'll just plug her in fill her up and then we can start doing some testing on the Sig MCX.

Here we go. Let's do this. Rack it, locked and loaded. 425 feet per second. 405 feet per second. 423 feet per second. Oh, 384, dropped a little bit shooter air, but 431, 400, I mean, are you kidding me? There's six nice little group. Let's see what we can do. When you're done, it goes into safe, can't shoot anymore. 376 all those, pretty good group at 25 yards. Guys, for a 177 gun like this, looks like this semi-auto, it doesn't get any cooler. I mean, it's got, you know, pretty good speed. You're looking at high 300s for the most part, mmm mid to low 400s which is good enough for this is a good planking gun. I mean, I don't, I would not recommend going and doing any hunting with this personally. I mean very, very small game, you know, I say like like like cockroaches, maybe ants, but for the most part, this is a gun for fun, for plinking, for knocking down targets. Let's take it to the gun range and see what we can do with it shall we? We shall.

I want to see it has the power to blow the hundred and thirty psi bottle we've got down there, the two-liter. Oh no, that's a big negatory, but let's see what we can do to a can of soda. Oh, there you go! See, got some power for the can. Let's see how good of aim I have with the rocket shot, hit it up, shoot the can in the air, hit the can. I'm gonna go ahead and say I probably missed that, you know, I'm not gonna miss King Kong's giant face. Reload. Alright, so looking at the the kind of the magazine here, there's a flat side and then this side has like a little it's just like the little part you put it in the thicker part, the thicker part you put that pellet down, so I'm finishing up here, but what so once you get like that and then you look at this, you'll notice that these little pegs fit right in there and then it just slides in like so pellets your face now. Now you gotta drop the chalk buddy, just drop it, yep, King Kong, I said drop it, drop the chalk. Ah-hah, King Kong, get gummy, you're the toughest monkey in the world I get it, but just fall down.

Guys, look, this is a great fun, plinking, a target gun. It's great if, you throw, this adapter on there from Air Ventura, you know, it's not gonna have the most power, it's not gonna pop off. Some of the big things we've got to here, but you talk about knockdown targets, hit little things at different distances all the way up to 35 40 yards, this is it the Sig MCX. You can get it for a hundred and eighty bucks. It's a repeater. It's 30 shots. It's semi-auto .177. It's as fun as you want to make it then we make it fun. Thanks for watching The Outsyder, see you next time. 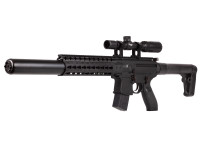 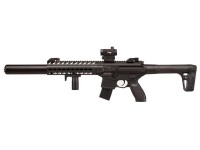 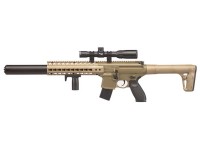 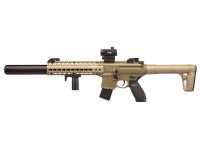 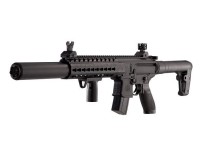