×
0
×
HomeArticles How to load pellets in airguns - Part 2: CO2 and pnematic guns

This is the second part of my "How to load pellets" series. Yes, there are several tips and things you need to know about loading pellets in pneumatic and CO2 guns. In fact, by improperly loading a pellet -- just that simple act, you can sabotage one of the finest precharged air rifles on the market! I know, because I was there when the whole thing began.

The AirForce Airguns saga
When AirForce Airguns first brought out the Condor rifle in 2004, it was produced in .22 caliber. Little thought was given to .177 because the sheer power of the rifle made it far more efficient in .22. I hand-tested the first 100 rifles they made and verified that each of them would shoot a Crosman Premier .22 caliber pellet faster than 1,250 f.p.s. Since that was how we were advertising the rifle, it was very important to make certain there would be no disappointments.

Over a full year later, we put a .177 barrel on the Condor. That was for the South African market, for whom .22 caliber is considered a firearm. We tested the guns, of course, and that’s when I saw a .177 pellet go 1,486 f.p.s. -- the fastest velocity I have ever witnessed in that caliber. The guns tested fine and would shoot through 1.50 two-by-four boards.

A few months after the rifles began selling in South Africa we started hearing about guns that exhausted all the air in their reservoirs on the first shot. This was the first time we'd heard of such a problem. Well, as chief tester at AirForce, I set about to finding out what was happening, but it took more info from South Africa before I discovered the "problem." I put quotes around the word problem, because it wasn’t a problem at all. It was a self-inflicted problem caused by improper loading. That was something I would never have done if the South Africans hadn’t shown me what they were doing.

They weren’t pushing the pellet all the way flush with the end of the barrel. When the gun fired, the air blast collapsed the pellet and folded it over against the breech face, pinning it there with air pressure. The backpressure held the firing valve open until all the air was exhausted. It was an easy fault to replicate, but only if the pellet wasn't properly seated -- and only in .177 caliber . 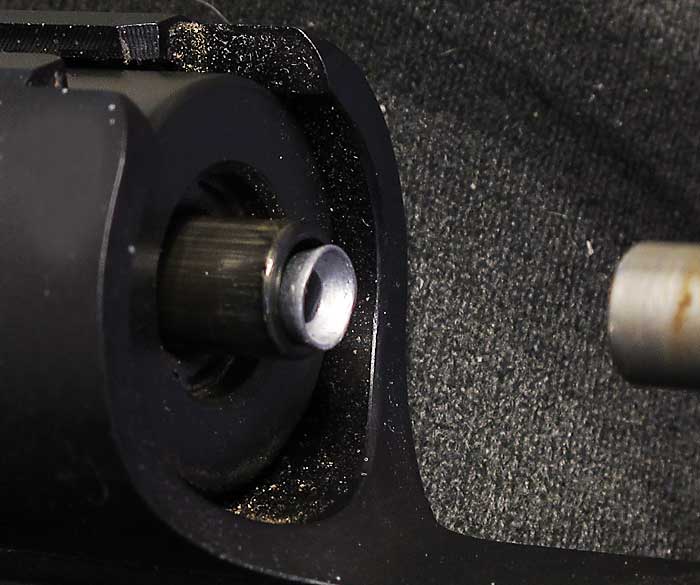 By not inserting the pellet until it's flush, the skirt is exposed and can be damaged. 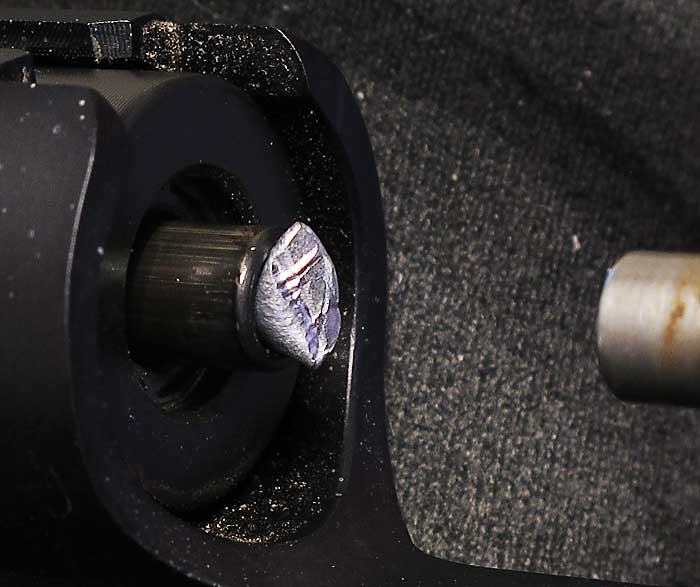 If you load the pellet as shown in the previous image, the air blast will squash the skirt against the side of the barrel and hold the firing valve open, exhausting all the air in the reservoir.

90-degree air transfer ports
Most pneumatics have air transfer ports located at the bottom of their loading ports in the breech. The pellet has to slide over the air hole and into the rifling. In a factory-made gun, the bolt nose is long enough to make this happen most of the time. If you use a thin-skirted pellet with a hollow head, the bolt nose may go into the pellet deeper and not chamber the pellet as far as it needs to be. Then, when the air blast comes through the transfer port, it will bend the bottom skirt of the pellet, causing inaccuracy.

At left is a pellet with chunks of lead removed from the skirt by a burr on the air transfer port. At right is a pellet skirt that's been smashed due to insufficient depth when loading. Either one will ruin any chance of accuracy.

But once people start to modify both CO2 and pneumatic guns, the transfer port problems start to increase with great frequency. Perhaps the most common of these is when the transfer port is enlarged. That often leaves a burr that scours the bottom of the pellet skirt when it's loaded. There's no way you can expect accuracy from a setup like that.

Another problem the modified gun may have is that the bolt nose may be thinned for better air or gas flow. When the nose gets too thin, it may not push pellets to the same depth as a stock bolt nose. You end up with a bent skirt and bad accuracy. You’ll never see this because the pellet has already been shot, but the accuracy will drop way off. Many builders suspect a bad barrel when this happens, and they waste time crowning the muzzle when the real problem is at the breech.

One final problem -- loading gates
I guess what I’m about to say also applies to magazines. Sometimes, those loading gates (where you insert the pellet) can damage the skirt of the pellet if you're not careful to push it in past flush. I had a Chameleon CO2 target pistol that had such a problem. Once I got used to it, it was no trouble at all, but in the beginning I suffered a few damaged skirts and flier pellets.