Gas springs in airguns is an interesting subject. I will need more than a single post to cover everything, but today I’ll cover the basics.

Terminology first
Gas springs are also called gas struts by spring makers in the UK. A quick search shows that even then, most of the manufacturers also use the term “spring” to make it clear what they are talking about. But gas strut is a correct term, if confusing. Gas “ram” appears to have been made up by airgunners. Someone has even gone to the trouble of making a Wikipedia entry for gas ram, so the confusion will be perpetuated. I will call them gas springs, and you’ll all know what I mean.

What is a gas spring?
A gas spring is a sealed mechanism that uses compressed air or other gas to create a spring action. The mechanism installs in an air rifle in place of a coiled spring and piston. The gas inside the mechanism is under pressure all the time, but when the mechanism is forced to contract (by the cocking of the gun) the internal pressure increases. An internal piston compresses the sealed air or gas into a smaller space (see the drawing below). The gun’s sear holds the internal piston in place until it is released by the trigger. Then, the piston springs forward to its fully open length. As it goes, it compresses the air in front of it in the same way a conventional spring piston mechanism does. At that point, it acts just like any other spring piston unit. 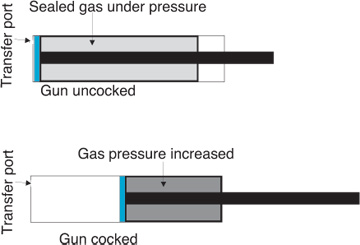 A gas spring uses gas under pressure to perform like a coiled steel spring.

Benefits of gas springs
Gas under pressure never takes a set or breaks down, as I discussed in the post about coiled steel mainsprings, so you can leave a gas spring gun cocked a long time with no power decrease. Gas springs also use very little lubrication, and they aren’t as sensitive to low temperatures as coiled steel springs. These two benefits make gas spring guns valuable to hunters.

More benefits
Compressed gas weighs less than a coiled steel mainspring. The entire sealed gas spring unit weighs a little less than the steel piston it replaces. The net result is that guns with gas springs are lighter than guns with conventional steel mainsprings. You save almost a full pound with a gas spring. Because they are lighter, gas spring mechanisms also accelerate faster than conventional steel pistons, giving a faster piston cycle time. They DO NOT reduce “lock time,” however! That is an urban myth started by airgunners who don’t understand what airgun lock time really is. While the piston in a gas spring gun does its thing faster than a conventional spring piston, the pellet does not begin moving until the piston has come to a stop. So the time that the pellet remains inside the gun after the disturbing movement (recoil) and vibrations begin is exactly the same in both types of powerplants. However, because gas spring units have a lot less vibration than conventional coiled steel mainsprings, there is an advantage to the gas spring. With all these benefits, you might think gas springs are the only way to go – but wait until you hear the down side before making your decision.

Gas spring faults
Gas springs require more effort to cock than coiled steel mainsprings. A Theoben Fenman that develops 12 foot-pounds takes 38 to 40 lbs. of effort to cock, while a rifle of equal power and a coiled steel spring might take only 25 lbs. A Theoben Eliminator, better known in the U.S. as the Beeman Crow Magnum, takes as much as 60 lbs. of effort to cock. While that is about equal to the Gamo Hunter 1250, a powerful coiled-spring rifle, the Webley Patriot that develops almost as much power as the Eliminator only requires 50 lbs. of effort to cock. When I released the air pressure in my .20 caliber Crow Magnum, the cocking effort dropped to about 46 lbs., but the muzzle energy also dropped to around 20 foot-pounds. A .22 caliber Diana RWS 48 develops 22 foot-pounds with just 33 lbs. of cocking effort.

The Evolution is Theoben’s entry-level rifle. It takes the place of the Fenman mentioned in the text.

Gas spring guns have a sharper jolt when they fire. You can offset this by holding them very loose (as you should for best accuracy). If you hang onto one like it’s a firearm, prepare to get your cheek slapped!

If they’re so great, why aren’t they available anymore?
I’m not really sure. I do know that the Beeman RX-2 is a Weihrauch gun that has a Theoben gas spring inside. Beyond that, I don’t know.

There is more to cover – things like overpressurizing the gas spring, piston seal burnout, the unavailability of the hand pump to regulate the gas spring pressure, longevity and maintenance, best pellets and scope mounting, to name a few.

27 thoughts on “Gas springs of the Theoben airguns!”