Benjamin’s Legacy breakbarrel has stirred up a lot of interest.

There has been a lot of interest in the Benjamin Legacy 1000. Thanks to Crosman, I have a sample, and I’ll give you my report today. I have the Legacy 1000X kit that comes with a 4x scope and mounts, so I installed it on the rifle right away.

General appearance and feel
The Legacy is light and small – Gamo Shadow 1000-sized, but the proportions of the stock are just right for an adult. The stock is a laminate of what appears to be beech. The stain is very even, and the laminations hardly show. The dark recoil pad has been expertly fitted. The profiling of the cheekpiece is vague, but I must comment that the pistol grip is one of the nicest I have felt in a long time! With a slight palm swell, it feels just right to me! Benjamin’s laser-cut checkering is very flat and more for decoration than to help with holding the stock.

The metal surface on the barrel is the roughest I’ve ever seen on an airgun, but the spring tube is smoother. The front fiberoptic sight is bright, while the two red dots in the rear sight are small and dark. Since I used the scope all the time, this was not an issue.

Powerplant
The rifle cocks as easily as the ad says (28 lbs.), though it’s a little stiff when new. I was skeptical about the power until I shot over the Chrony Alpha and saw the numbers for myself. After some initial dieseling, Crosman Premier 7.9-grain pellets averaged 902 f.p.s., 10.6-grain Beeman Kodiaks averaged 776 f.p.s., Remington pointed pellets (7.8 grains as weighed) averaged 921 f.p.s. and JSB Exact 10.1-grain pellets (as weighed) averaged 767 f.p.s. That’s an energy range of 13.20 to 14.70 foot-pounds. One thousand f.p.s. velocities would be easily obtained with lightweight pellets, and I think the rifle will improve with a long break-in.

Trigger and safety
The trigger looks, acts and feels like a Gamo trigger. The length of the second stage pull is adjustable and the gun came out of the box with all the first stage adjusted out. The single stage letoff was heavy but even.

To its credit, the safety is manual. When the rifle is cocked, you can fire it without another action. To apply the safety, pull it back toward the trigger. It can be applied and released at any time, regardless of whether the gun is cocked. The rifle does have an anti-beartrap feature that precludes uncocking. So, if you cock it, you have to shoot it. 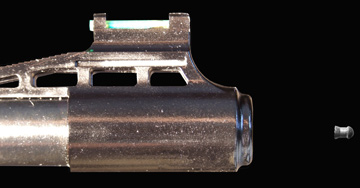 Accuracy
The Legacy has the potential for good accuracy. I shot inch-sized 5-shot groups at 25 yards. For some reason, they opened up to 2.5″ at 40 yards. I think that was due to the low magnification of the scope, more than the rifle. With greater aiming precision, I see no reason why this rifle couldn’t shoot 1.5″ groups at 40 and even 50 yards. It certainly has the power to reach that far. The most accurate pellets were Beeman Kodiaks and JSB Exacts (heavy).

My brief test shows the Benjamin Legacy to be a surprisingly good air rifle. It’s available only in .177, which is a shame because it also has the power to be a .22. However, the .177 is just fine.