Enough build-up. Today, the disassembly begins! I’ve selected a Beeman R1 to tune for you. That means I’m now going to get specific about parts and how they come off, but I will make provisions for other airguns, as well. What I can’t do is provide complete disassembly instructions for every spring gun made because there isn’t enough time and I haven’t taken all of them apart. I’ll provide general instructions for different categories of guns, and you’ll have to be clever enough to follow along and to figure things out on your own.

Before you start
Is this a project you SHOULD do, or are you a person who goes halfway and quits? If the latter is the case, DON’T START! I will not assemble any basket cases for anyone, nor is Pyramyd Air responsible in any way for your actions. I am doing this series so those who want to learn about their spring gun powerplant – can. I make no guarantees to anyone about anything.

First
Make certain the gun is neither loaded nor cocked. You’ll be sorry if you get the gun partly disassembled, only to discover that it’s cocked. It can kill you if you don’t handle it carefully, so take NO CHANCES.

R1 action removed from stock. Sights have been removed.

B-Square’s mainspring compressor is lightweight and very adjustable. Can you identify the headstock, bridge and tailstock? 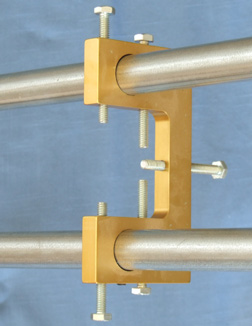 The bridge uses five bolts to enclose the rifle’s action and keep it from moving when the mainspring is decompressed. The bolts on top will pass over the action. I use a heavy leather belt around the gun to keep from scratching the metal.
Install the action in the mainspring compressor
I’m using a B-Square mainspring compressor, and the big thing with that one is to restrain the middle of the action. Since the bridge is different than the one found on homemade compressors, you have to spend a little time snugging the middle of the gun. Also, make sure you allow enough travel in the headstock so the mainspring can be decompressed all the way. If you don’t, you’ll have to assemble the gun again and adjust the compressor.


What if you have no idea how far the mainspring will travel to decompress? Well, that happens when taking apart a gun that’s new to you. Don’t trust what anyone tells you, because your gun may have an aftermarket spring that’s a lot longer than they say. What I do is allow a maximum of five inches of headstock travel when I’m not familiar with a certain gun. The worst I have seen was about 4 inches of travel on factory FWB 124s (all of them) and also once on a tuned HW77.

Tomorrow, I’ll put the rifle in the compressor and remove some parts!