First, the trigger comes out by drifting two crosspins from the left. The safety is spring-loaded and will be released when the trigger unit drops free. 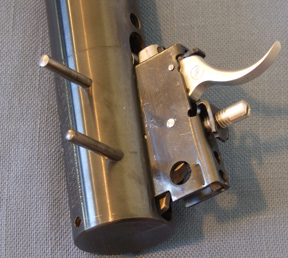 Two pins are drifted out and the Rekord trigger is free. 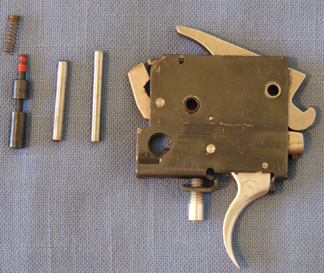 Here’s the trigger with the crosspins, the safety and its spring.
Unscrew the end cap
The end cap is the reason Weihrauch spring rifles are much easier to disassemble. It holds the mainspring in the gun under compression. It simply unscrews from the spring tube. The first time you take it off it may be hard to start, so insert a wrench handle in the slot where the Rekord trigger was and bump it from the side. Mine’s been off before so it simply unscrews. 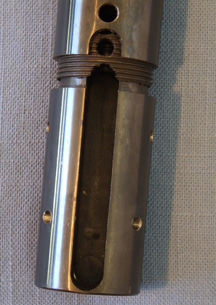 The end cap simply unscrews! The action is not yet in the compressor because the end cap is still restraining the spring, however, at this point, it goes in!
This is where other spring guns cause problems. In a later posting, I’ll discuss several of the other common ways of holding the mainspring in the rifle. 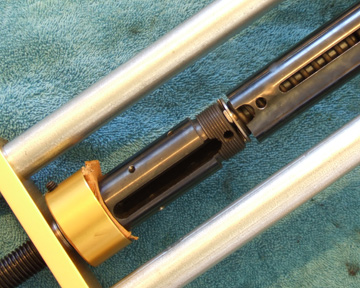 The end cap is out and the mainspring is coming out of the tube. This is where you really need to keep the gun under control, and the compressor does that for you.
With the end cap out, I simply back off tension until the mainspring relaxes and I can safely remove the action from the compressor. Now, the mainspring and spring guide will come out of the rifle, but not the piston! It’s held in by the cocking link that’s connected to the barrel (this is a breakbarrel, remember?).

The end cap is off, and the mainspring is out, but the piston is still connected to the barrel by the barrel link, shown here.
Separate the barrel from the spring tube to release the piston.
This involves removing the pivot bolt that serves as the barrel’s axle when it breaks open. On Weihrauch rifles, there is a nut on the right side that’s removed first. 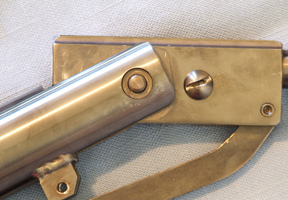 The pivot nut looks like a large screw head. It has been removed from the bolt in this photo.
I’ll finish disassembly in the next post.