I’m back in the office after attending to some family business. Thanks for being patient. Today, I want to talk about a neat spring-air rifle that is still being made but perhaps not imported to the U.S. at the present time. I’m talking about the Slavia 630/631, by Cheska Zbrojovka (CZ).

No longer imported to the U.S.
I mentioned in Spring Break that my first spring air rifle was a Slavia, but that it came with no instructions and wasn’t much fun as a result. Had I known how to treat a spring-piston air rifle with leather piston seals, I actually would have owned a pretty nice air rifle with an accurate barrel.

CZ has the reputation of making some of the world’s finest-quality sporting barrels. Firearms shooters see CZ rifles appearing in both rimfire and centerfire calibers, and users of autoloading pistols have known about fine CZ pistols for many years. But the Slavia air rifles have languished quietly in the background, until the plug was recently pulled on U.S. importation. Having said that, I just know I’ll be directed to an obscure website where someone is still bringing in the CZ 630 and 631 (if they are, it’s a very close secret!).

Not magnums!
One reason for their lower popularity is probably due to the power they develop. These are not magnum air rifles by any standard. They shoot .177 pellets in the 600 f.p.s. region and offer superior accuracy at a very nice price. Imagine that you could buy a Beeman R7 for half the price. Interested? Of course, the price has risen over the years, due to the dollar slipping against the euro, but that’s true of everything European.

630/631 Lux – same gun
Just as the Diana RWS 48 and Diana RWS 52 are identical rifles in different stocks, so it is with the Slavias. The metal remains the same, and the stock assumes nicer proportions in the 631 Lux model. Power, accuracy and functioning remain the same. I bought the 631 for the nicer stock, but I would have been just as happy with the performance of the 630. 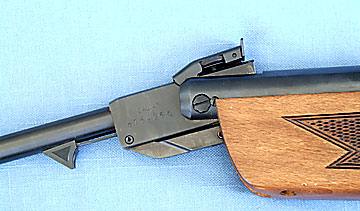 Pushing forward on the spring-loaded latch under the barrel releases the locking detent for cocking.

Barrel lock
Before the barrel can be broken to cock the rifle, a spring-loaded barrel lock located under the barrel must be pushed forward to unlock the action. This is a vintage feature that used to be more popular back in the 1950s and ’60s. Today’s shooters don’t want any extra steps in the cocking process. Heck, most of them want semiautomatic loading, which may account for some of this rifle’s low sales! Veteran spring gunners, however, know what a great value the Slavias were, and they either tolerate the barrel lock or celebrate it, as I do. 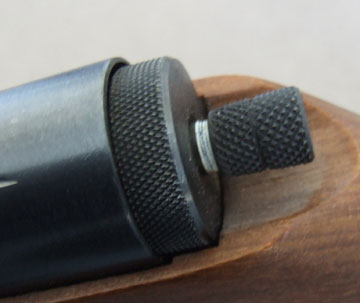 Automatic safety pops out like this when the rifle is cocked. Push in to release.

Automatic safety!
The safety is one modern feature that was put on the gun to assuage American liability concerns. When the barrel is cocked, the rear safety button automatically pops out. I don’t care for automatic safeties, but this one works well and is as unobtrusive as possible. 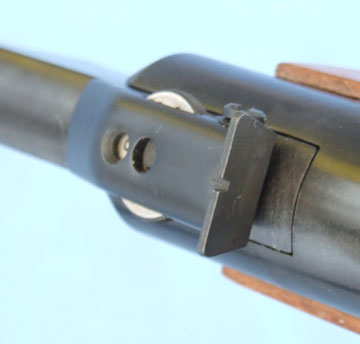 Steel rear sight adjusts in both directions. Elevation is read through an open hole in the top of the sight.

Sights
The all-steel rear sight is adjustable both ways. Elevation has a click detent with reference numbers but windage is without clicks, though there is an engraved scale for left-right reference. The front post is protected by a hood, and it appears sharp when seen in the rear notch. The rifle has parallel dovetail grooves for mounting a scope, plus there are transverse grooves that serve as scope stops. As far as I know, only B-Square makes the correct scope rings to fit this rifle. You might have to call the factory to get them because the dovetails are spaced wider than normal.

Accuracy potential
I have tested my rifle with a scope, though that is not the way I prefer it. Groups at 25 yards hover around the 0.25″ to 0.35″ size for five shots off a bench. But this isn’t a bench rifle! It’s a sporting rifle that’s made to be shot in the offhand position using open sights. It’s a plinker that can also take very small game and pests at close range. Use the same pellets that work on all other air rifles – which for me means starting with the JSB Exact.

Will they ever return?
That is a tough question. While there may be a small contingent of 100 shooters who might buy the Slavia spring rifles, that’s hardly enough demand to justify importing them. If the demand were for 100 rifles A YEAR, then things might be different. But most airgunners today either want f.p.s., which these guns don’t have, or they want the lowest possible price, which they also don’t have. Slavia springers have always been mid-level spring guns for a good price. Sort of like the Checker Marathon automobile that was wonderful on its own merits, but most buyers who wanted similar features wanted an Oldsmobile 98!

I bought mine new a few years ago because I feared it might not be around much longer. If you want one, I’m afraid you’ll have to haunt the airgun classified websites.