Okay, I’m back to the CX-4. I won’t call it the Storm because that name seems to be used by everyone these days. Our last look was just a walk around the outside, with a peek at the novel magazine. Today we’ll load the gun and start shooting.

The first thing I did was charge the gun with an AirSource cartridge. The buttplate comes off and the cartridge is hidden inside, out of sight. Put several drops of Crosman Pellgunoil on the tip of the cartridge that gets punctured and screw it into the gun until you hear the gas release. The owner’s manual recommends RWS chamber oil, and it does recommend using it with each new cartridge, so what I’ve been telling you for years is now showing up in manuals.

Loading the magazine
Loading the mag reminds me of what the Confederate troops were supposed to have said about the Henry repeating rifle, “That damn Yankee rifle you load on Sunday and shoot all week.” Of course the Beretta mag holds 30 shots to the Henry’s 14, so all-week shooting is even more possible, though a itchy trigger finger will probably reduce that time to a minute or two. 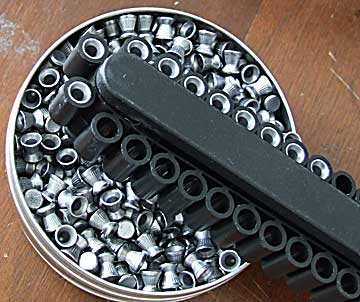 The pellets push in from the back of the pellet carrier.

The pellet chambers are longer than those found in other repeating pellet magazines and they allow heavy pellets to be loaded without a problem. The manual recommended using RWS pellets, and I felt that RWS Hobbys were ideal for a gun in this power range, so that’s what I loaded, but the design of the magazine allows for pellets of all shapes. You can even load different pellets in the same magazine. No BBs though. 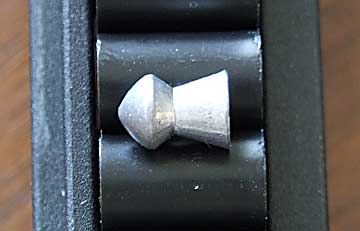 Even 10.6-grain Kodiak pellets will fit in the chambers with ease.

Trigger-pull
After reading that the trigger-pull is 11.5 lbs. I had concern. That’s way too heavy for a rifle trigger. But relax – it breaks at 8.5 lbs. and is remarkably crisp. And by “breaks” I mean that the sear releases at that point. It’s a very common gun term. I had a reader ask why triggers broke so easily and I felt I had to explain it again. It’s a two-stage trigger and not adjustable. The wide trigger blade spreads out the force and makes it feel much lighter.

Firing behavior
You feel the pulse of each shot, but nothing on the outside of the rifle moves. In this respect, I have to observe that it’s a little harsher feeling than the Crosman NightStalker, whose cocking knob on the left side of the receiver does cycle with every shot, but so fast that it’s difficult to see. The CX-4 can be uncocked, however, which is a big safety advantage.

Power
After the first few super-energetic shots that still had liquid CO2 behind them, the rifle settled down to velocities that ranged between 560 and 608 f.p.s., with the bulk being in the 585-595 range. A broad range like that tells me this rifle need to be broken in, and that it will probably increase a bit in velocity. The post I just finished on what happens to a gun during a break-in will refresh you on what’s happening, though this is a CO2-powered synthetic-based rifle rather than a metal spring -piston gun. It still has rough spots that need to be smoothed out.

Incidentally, for those who wonder how to tell if a CO2 gun is shooting liquid, the clue is when you see white snow coming from the muzzle. That’s liquid that has frozen into frost on its trip through the gun’s action. You get the same effect when discharging a fresh CO2 fire extinguisher.

Power part 2
Something about the way the gun was breaking in so fast during the velocity testing bothered me, so I came back and did it a second time. Now the velocity of Hobbys was up to 600-619 f.p.s. Not even the first magazine has been fired, so I will come back and do this again, when the rifle has more miles on the powerplant. But it has already exceeded the specification, which is pretty good.

Next we’ll try the rifle for accuracy.