Today, we’ll take the S410 sidelever to the range. The day was pretty good, with just a light, intermittent breeze.

I sighted in at 10 feet, and the first shot hit the paper directly below the bull where I wanted it, so I knew I would be on target at 35 yards. Read Tom Gaylord’s article about how to sight-in a scope to learn more about this technique.

Initial shooting at 35 yards
I started shooting with Beeman Kodiak pellets. They weigh 21 grains, which is heavy for a .22 caliber pellet, and heavy pellets draw out the most energy from a precharged pneumatic gun. They grouped just under one inch at that distance, which wasn’t what I wanted from this rifle, so I moved on. I will discuss velocities in another posting, but the rifle was set at full power with this pellet. 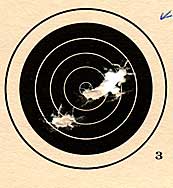 Beeman Kodiaks were not what I expected at 35 yards–0.85″ group.

I tried JSB pellets next
JSB Exacts are often the most accurate pellet in a given air rifle, so they were next. I dialed the power back to halfway, because at 15.8 grains, they seemed too light to shoot at full power. The groups were much better, averaging less than a half-inch. The best group was 0.391″ and the worst measured 0.635″. These would be good hunting pellets for this rifle. 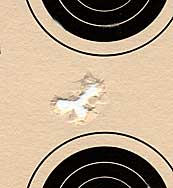 Gamo Hunters were okay
To keep things stirred up, I tried some .22 caliber Gamo Hunters. They worked okay, but the smallest group of 0.815″ and the largest of 0.940″ are too large, considering what other pellets can do. The power setting was also halfway for this pellet, which, at 15.4 grains, is lighter than the JSBs and Kodiaks. 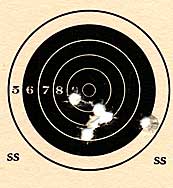 Gamo Hunters were okay, but there were better pellets.

H&N Trophy pellets were also good…but not the best
To round out the test, I tried H&N Trophy pellets. Pyramyd Air doesn’t stock them, but the Field & Target Trophy is very similar. They sometimes out-test other pellets in certain guns, but usually they are behind Kodiaks and JSBs. This rifle was acting differently, so I thought I’d give them a try. 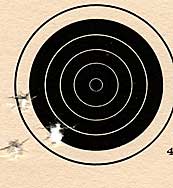 H&N Trophy pellets were good, but not the best–0.485″ group. Hole on the right has three pellets.

Crosman Premiers were best of all!
A reader told me that Crosman Premiers were the best pellets in his S410. Ten years ago, they were the best in the world, and they haven’t slipped in quality in that time. Other pellets have gotten better. The first group was 0.466″ and it sparked me to try harder. The next group was slightly larger than a half-inch, but the third group was 0.305″. It turned out to be the best of the session, but I wasn’t done testing quite yet.

Technique matters!
Now that I had a pellet of known accuracy, I shot another group without resorting to any technique at all. Just shot it like a deer rifle, only off the same rest as the other groups. It measured 0.577″ and it would look good to someone who didn’t know what this rifle can really do. But you and I know there is more to be had when the right technique is employed. 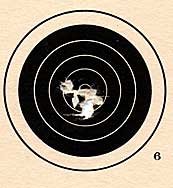 When you get a result like this (0.305″), it’s probably the pellet of choice. Crosman Premiers. 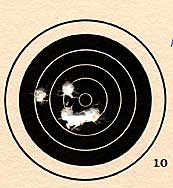 The best pellet in the world will not make up for poor technique. Crosman Premiers fired with no regard for technique. Rifle shot from a rest like a deer rifle, meaning once-a-year, casual acquaintance with shooting technique–0.577″.

The technique to use
A PCP doesn’t recoil in the same way that a spring gun does, so a lot of the artillery hold is wasted on it. There are, however, two components of the artillery hold that are essential to better accuracy with all rifles – PCPs and firearms included. They are the proper positioning before the shot and follow-through. Proper positioning means that you align the crosshairs with the target with absolutely no strain. In other words, if you relax your grip, take a deep breath and let it out, the crosshairs are still aligned properly. Any strain to hold the gun on target will result in a larger group.

Follow-through means you keep the crosshairs on target after the shot is fired. With recoiling guns, this takes a lot of discipline because the gun moves you off-target; but you remain where you land and keep watching the target for several seconds. What follow-through does is cancel the tendency to lift your head from the sights the moment the shot goes off. That isn’t a terrible thing by itself, but it leads to pulling your eyes off-target an instant BEFORE the shot goes off, and that leads to moving the gun at the same instant. It is a practiced “flinch” and devastating to accuracy.

I used a hand pump!
Because the S410 sidelever came with such a strange fill adapter, I connected it to the hose on my Hill pump, which was used for all filling duties. The rifle drops to around 2,000 psi when the groups start opening at 50 yards, and it takes 50-64 pump strokes to get it back up to 2,900 psi (just less than 200 bar), which is the recommended maximum fill.

In the next post I’ll discuss velocities and talk about how quiet the rifle is.