Scan M32 is a 32-shot repeating PCP that operates by pump action, similar to a pump shotgun. Unlike all other pump guns, the pistol grip and not the forearm is what cycles the action. Scope is a Leapers 6-20×56 that’s no longer made.

This test comes from the August 2001 Airgun Letter. Mike Reames was kind enough to loan me the rifle to test. And, as you have already learned, I found it the most accurate air rifle I’ve ever shot.

The Scan M32 is a 32-shot pump-action repeating air rifle. It’s a precharged pneumatic, and the pump-action refers to how the rifle is cocked and loaded. Pulling back on the pistol grip cocks the rifle and loads the next pellet. In that respect, it differs from all other pumps I’ve used because they use a sliding forearm for this purpose. Also, you must depress a lock release on the left side of the gun before the pistol grip can be moved, so this is not the rapid-fire pump we’re used to. If you go too fast, the magazine-advance pawl will hang up and stop the gun.

The clip is a double-stack cylinder that feeds radially outward from the center of the circle. There are two cylinders stacked on each other. When one is empty, the clip is removed, flipped and reinserted. The manual recommends loading 15 pellets per cylinder, but it is possible to load 16, hence the M32 name. 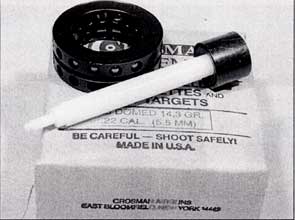 Pellets are pushed from the back (the inside) of the circular clip. One level is loaded at a time, then flipped over for the other side. The large black head of the pellet pusher is also used to hold the action open when installing a clip.

When you pull back on the pistol grip, a pawl advances the large clip to the next pellet, and this is where the gun was hard to manage. That pawl on the rifle I tested was an iffy thing, sometimes working and other times not. I had to check the alignment of the clip before every shot. That and the difficulty of sliding the grip made the rifle a very slow and deliberate operation. 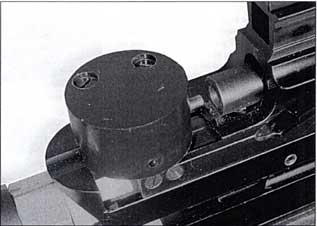 Closeup of the action shows how the bolt probe pushes the pellet from the clip into the breech. In this shot, the bolt is just starting to move, and there’s no pellet on it.

The air tank is in the removable butt, like an AirForce rifle, only Scan used the design many years earlier. It’s a small tank, and the fill pressure is 230 bar, or just over 3,300 psi. I didn’t own a Hill pump at the time, and the AirForce hand pump was still many years away, so I babied my old Axsor pump and it did the job. I would not recommend that you try it, because that’s 300 psi above the pump’s rated capacity.

With .22 caliber Crosman Premiers, the gun averaged 810 f.p.s., for 20.84 foot-pounds and an extreme velocity spread of 20 f.p.s. I didn’t record the velocity for the most accurate Beeman Trophy Hunters (an obsolete pellet, but probably the same as the H&N Field & Target Trophy), but they weigh pretty close to the same, so there shouldn’t be more than 20 f.p.s. difference.

If you’ve noticed that the M32 looks something like an AirForce rifle, you’re right. The smaller air tank, though, made it difficult for me to find a good spot-weld on the stock. The result was extra parallax. In the end, I had to use the scope to tell me when I was in position. It got brighter when I held my head at the correct spot. Once I learned that, I shot that group you saw last Friday.

While I was shooting targets at 40 yards, a spider walked out on the wooden target frame. I was looking through a Leapers 6-20×56 (an obsolete scope), so the quarter-inch arachnid body was quite visible. Since I knew exactly where the pellets were going, I shot the spider dead-center and sent him through the wooden target frame. That was the best shot I ever made with an air rifle and reminiscent of the time I shot a hovering carpenter bee at the 100-yard target with my Mauser .22/250. This time, though, I had a witness watching through his own scope and saw the hit clearly – just as I did.

The Scan M32 is an interesting air rifle, and the most accurate one I ever shot. I didn’t like the operation, however, and I wouldn’t choose the rifle because of that.

Tomorrow, I will finally shoot the Air Arms S410 at 75 yards for you.