Today, I’m going to the airgun show in Little Rock, so my blogs will be posted today and Friday, but I won’t be available to answer questions. I’m asking you more experienced hands to watch out for the new readers’ questions, if you will. Thanks for your help!

According to the box, the SIG Sauer SP 2022 BB pistol came in, it has BAXS, which stands for Ballistic Accuracy Extreme System. In other words, a form of Hop-Up! I was asked on this blog some time back if Hop-Up could be applied to a steel BB gun, and I said I didn’t know. Apparently it can, and this pistol is one of the first to do so.

What is Hop-Up?
Hop-Up is a device that puts a backspin on a round ball so it will fly farther and straighter due to the Magnus effect. It’s the principle behind the major-league fastball. Now, it has apparently been applied to a real BB gun. I will be very interested to see how accurate this pistol is, because Hop-Up does improve the accuracy of a 6mm plastic ball. I can’t think of why it wouldn’t also work with steel BBs, except that they have quite a bit more kinetic energy concentrated in a smaller projectile, and that might cause them to chew through the rubber pads in the mechanism. We’ll see.

Velocity
With the KWC BBs supplied, I got an average of 345 f.p.s. The low was 336 and the high was 354. Shooting was done at 30-second intervals to allow the gun to warm up from the CO2 cooling.

Velocity
The magazine holds 23 BBs, so it’s possible to shoot that many times in quick succession. I tried that several times and saw the following effect. The first shot of Daisy BBs went about 342 f.p.s. Velocity climbed up to 360 f.p.s. in about five shots. Velocity then fell off regularly with each shot, until shot number 23 was down around 309-312 f.p.s.

Jam!
Once, when I’d pulled the trigger almost to the breaking point, I didn’t fire. By relaxing the trigger, I jammed the mechanism. There’s a positive tubular shuttle that pushes the BB forward (into the BAXS mechanism, I presume). To clear the jam I simply removed the magazine and the loose BB dropped out. This is an airsoft trait, and I expected it from the design of the gun. I tried to force it to happen a second time but was unable. 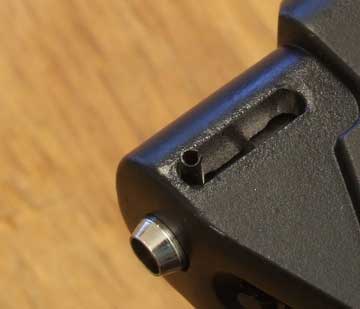 The front of the magazine with the movable shuttle sticking out. When the trigger is pulled, this part pushes the BB into the rear of the barrel, where the BAXS presumably stops it.

This pistol flexes in my hand as I shoot it. The magazine is also loose in the well and rattles a little. But the next test will be accuracy and we’ll see what effect, if any, this has.