Today, I’ll finish the Walther Falcon Hunter .25 caliber rifle test. Yesterday, the wind dropped to only 15-20 m.p.h., and, although rain threatened, I went to the range anyway. I had an epiphany on the range, making it one of the best days ever spent shooting, though you will have to read the entire report to learn why.

Nothing seemed to work!
I can usually get just about any airgun to shoot, but the Walther Falcon Hunter defied me at every turn. I went to the range with Beeman Kodiaks, Beeman Silver Arrows, Beeman Crow Magnums, Beeman Ram Jets and Diana Magnums, and nothing wanted to group better than two inches at 30 yards! I didn’t want to report that – especially with so many good reports on the rifle – so I kept adjusting the artillery hold lighter and lighter.

One fact became obvious
The more I shot, the more the rifle demonstrated that it didn’t like any pellet but the Kodiak. The others were all over the paper. The Kodiaks were stringing vertically in tight groups side to side, but with 1.5″ to 2″ vertical stringing. Some people might call that “scope shift,” but I know what it really is…an improper vibration pattern. I hadn’t found the right hold so that the vibration repeated regularly enough for accuracy.

I went through many targets
I was replacing targets more often than ever, with nothing to show for it. The rifle kept teasing me with a tight group of two or three shots, then it flipped the next one out two inches. In my head, I was hearing the comments of many new airgunners, but I could not get the rifle to calm down.

And then it happened!
My epiphany came as I thought about all those years ago – before I started writing The Airgun Letter – when I first discovered the spring gun hold I later called the artillery hold. Dr. Beeman still owned the company he founded, and was advising shooters to hold their spring guns with a firm hold. I was unable to get my Beeman C1 to group worth a darn by holding it that way and then wondered how bad it would get if I held it very loose. I held the rifle as loosely as possible and shot a 0.13″ five-shot group at 10 yards. The artillery hold was born. 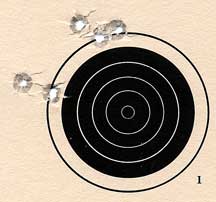 The rifle kept teasing me with groups like this. You can cover either group with a dime, but the entire group is just over one inch. This is indicative of the wrong hold, because the tight groups indicate the rifle wants to shoot. Some shooters would call this “scope shift” when it’s really a change in the vibration nodes that throw the pellet to a different place.

That day many years ago I made a breakthough by going against the established rules of airgunning. What if I did the same thing now, by NOT using the artillery hold? What if I held the Walther Falcon Hunter like a deer rifle – the very thing I tell everyone NOT to do? Well, you can probably guess what happened. 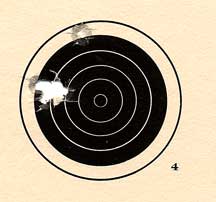 This is what’s possible with the correct hold – which in this case is a firm, “deer hunter” hold with the off hand grasping the sides of the forearm. Yes, I’m aware of that lone hole at 12 o-clock, but look at the four pellets at 9. The Walther Falcon Hunter can really shoot! If I had more pellets I would have repeated this performance.

Ran out of pellets
Naturally that best group came with the last of the Kodiaks. I would have shot a few more confirmation groups, but there were no more pellets. I shot up a third of a tin yesterday, plus quite a few other pellet types trying to get to this point.

The right hold does not mean pulling the gun in tight to your shoulder. I tried that, too and got the multiple groups shown in the first photo. No, this rifle just wants to be held firmly, like you would a light-recoilling centerfire rifle like a .223. Don’t rest the rifle directly on the bag, but rest your hand on the bag if you want.

The last word
We learned a lot with this rifle, including how important the breech seal is. This is a package deal with a price that’s hard to beat. And now we see that the rifle also shoots very well, if held the right way. A powerful .25-caliber spring rifle and scope for less than $270 is a deal that’s hard to overlook. The Walther Falcon Hunter isn’t a plinker, but if you want to hunt with a springer, this may be the best one in .25 caliber.