Last week someone asked if I would report on this rifle. I thought I had already, but a search turned up nothing. If ever a CO2 rifle deserved a report, this one does. Today, I’ll begin to correct that situation.

When I first heard about the Walther Lever Action, I knew it would be a good one. Made from all wood and metal with American-penny accuracy at 20 yards and 8 fast shots with the flick of a finger lever, what’s not to like?

I saw the first rifle just as I was starting the premiere issue of Airgun Illustrated magazine, so naturally it became a feature article. The rifle delivered on all its promises and then some. The accuracy was wonderful, the lever worked easily, the trigger was a good two-stage trigger – a little heavy on stage two, but crisp, nonetheless.

A good copy
The Walther Lever Action is a copy of Winchester’s model 1894 rifle. Just like the Winchester, the top cover of the action slides backwards when the lever goes forward. That pushes the hammer back into lockup with the sear, and the hammer that’s visible is what actually fires the gun. However, you can’t thumb the hammer back to near-sear lockup and let it go to exhaust the gas. The way this rifle is designed, the trigger must be positively pulled for the gun to fire.

When the finger lever goes forward, the rifle is cocked and loaded. 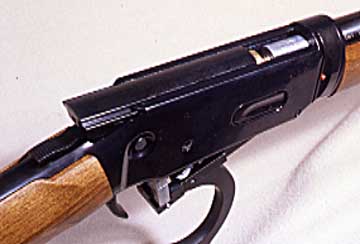 The top action cover (which would be the bolt in the firearm) slides back with the lever to cock the hammer. Round button is the crossbolt safety.

One additional comment about the action. If you’ve never owned a Winchester 1894, you may not know that you have to pull the finger lever up with the firing hand while you squeeze the trigger, otherwise the sear won’t release the hammer. This mechanism is called the trigger stop mechanism, and it’s there to ensure that the action is fully locked before the gun can fire. The Walther Lever Action does not have this feature, so it’s a little easier and faster to fire than the Winchester.

Safety
The Walther has a crossbolt safety that’s very similar to the one used in some of the Winchesters. It works well, plus it allows dry-firing without gas loss.

The carbine
When the Walther was initially offered, it was as a rifle and a carbine they called the Lever Action Short. They also offered rifle combos with either a scope or a red dot. The carbine was the first one to hit the U.S., so Walther had it shipped to me for the review. As a consequence, I never reviewed the rifle, though the difference between the two is simply a matter of barrel length. In a CO2 rifle, however, barrel length can make a difference in velocity, so when I test my carbine for you, we’ll see how close it is to the full rifle. It won’t matter much, though, because the carbine has been discontinued for over a year.

Wells Fargo
The other model you can still buy is the Wells Fargo. It came out a year after the rifle was launched, and I don’t know how much longer it will be around. It has an engraved brass-plated receiver and darker wood for an attractive western look reminiscent of the 1866 Yellowboy Winchester. 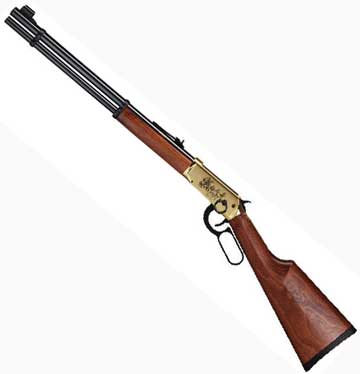 CO2
Walther really produced a strange CO2 holder for this rifle. It’s a removable tray that holds two powerlets completely out of sight when closed. The opening catch is in the buttplate and hidden from general sight. Speaking of CO2, I’ve kept my carbine charged for three years now, so don’t tell me how CO2 guns leak. If you’ll just use Crosman Pellgunoil on each new CO2 cartridge, you’ll have the same kind of experience. 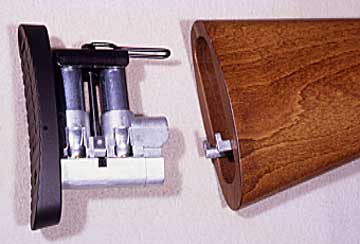 CO2 is housed in this removable mechanism. It takes two cartridges to power this gun.

Loading
This rifle accepts standard 8-shot Umarex clips, so lay in spares when you buy the gun. This also means you can use the Air Venturi speedloader to fill the clips. To access a clip for loading, press in on what looks like the cartridge-loading port on the right side of the action. 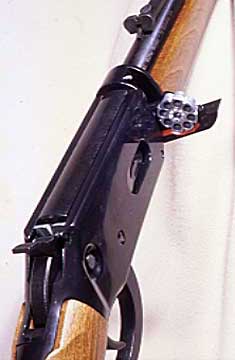 Press in on the cartridge-loading port and the magazine holder pops out.

What we have is a very realistic .177 caliber, 8-shot repeating rifle. It’s quite realistic and a joy to operate. Next time, we’ll see how fast she goes.