Today we’ll shoot for accuracy with the Gamo Recon. That means I had to mount the 4×20 scope that comes with the gun because it has no other sights. Many customer reviews said they liked the rifle but not the scope, so I’m prepared to give you my opinion. Also, I’ve heard from many readers who love their Recons, so I had the sense that this was going to be a good test.

Mounting the scope
When I mounted the scope, I came face-to-face with what all the critics have said. This really is a cheap little scope that doesn’t belong on a rifle as potentially nice as the Recon. This is a $5 scope at best; the cheap little claw mounts held together by a single screw were enough to convince me of that. The rifle has no true scope stop, so I did what everyone probably does – I butted the rear scope ring against the plastic end cap…and hoped it wouldn’t move. As far as I can tell. it never did…but I shot the gun only about 100 times. 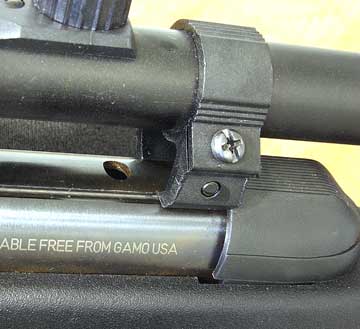 I didn’t care for the scope mounts that seemed fragile, though they held up through the test. Note the open hole directly into the spring cylinder. Careful owners could use it for a vertical stop pin, as long as the pin never extends below the bottom of the hole.

Sight-in
If the mounts give a bad impression, just wait until you look through the muddy optics! They were blurry and out of focus at 20 yards, though they do clear up around 25 yards. The edges of the viewing area are dark, which, considering the narrow viewing angle you start with, is like looking through a rusty water pipe. Still, this is the scope the gun comes with, and I wanted to see what it could do.

How the gun handled
I neglected to report earlier that the stock’s length of pull is 12.5 inches. An adult rifle would have a pull between 14″ and 14.5″. When I settled into the shooting bench, this short pull and small scope combined to bring my head down low on the gun and very far forward. I have a long neck and the stock was actually too short for me when shooting from a bench. I compensated, but I’m mentioning it in case you’re thinking of getting one for yourself. Offhand, it’s still fine.

No artillery hold
I got on paper right away at 20 yards with 7.9-grain Crosman Premiers, but my groups were large and strung out vertically. I played with the hold and finally decided to abandon the artillery hold. The Recon is so light that it doesn’t seem to respond well to a light touch. I switched to a more conventional hold where I grasped the stock but didn’t pull it tight to my shoulder and managed to get an acceptable group with the Premiers. 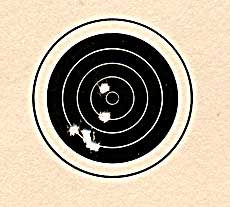 The next pellet I tried was the Gamo Match, and it was surprisingly good. Again, the lighter hold wasn’t what the rifle wanted. I used a firm but not harsh grasp and didn’t pull the rifle hard into my shoulder. I was rewarded with the best group of the day. 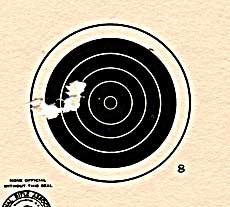 I still got vertical stringing with the Gamo pellets if I allowed the stock to move in any way, so I determined to hold it as tight as I could by pulling it straight back into my shoulder. That did not work well, though. I got good groups of three shots with two fliers that I could not anticipate. The best hold I was to discover all day was a gentle but firm hold with the off hand grasping the stock and the butt against my shoulder with solid contact but not too tight. 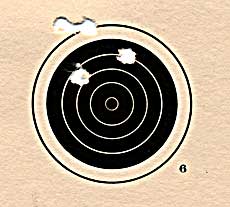 Five RWS Diabolo Basic pellets gave this 0.870″ group at 20 yards. This was the best these pellets did, which is more like the average for Gamo Match.

RWS Diabolo Basic pellets were not as good as Premier lites or Gamo Match. They would be okay for shooting pop cans, but for serious shooting look for something better. I also tried the 8.4-grain JSB Exact domes, but they weren’t even as good as the Diabolo Basics. I guess they’re too heavy for this small powerplant.

The bottom line on this gun is this: I like the ease of cocking, the light weight and the lighter, if creepy, trigger. The short stoke and low-mounted scope made it difficult to shoot from a bench, but that’s no strike against what is supposed to be a kid’s gun. Accuracy is all I could ask for and probably better than I was able to show. The Recon is a winner that belongs on your short list for youth rifles.