Okay, today I’ll shoot the .177-caliber Gamo Recon for you. Once again, I must comment on how easy this rifle is to cock. That’s going to make it a great kids’ gun, if it’s also accurate.

There continues to be a buzz from the powerplant with each shot. It isn’t a bad one, but it was there with four different pellets, so it’s probably not going away without a tune.

Trigger-pull
If only all Gamos had a trigger like this! It’s light and easy, though not overly smooth. The breaking weight in stage two is 2 lbs., 9 ozs. Stage one is a short take-up, and stage two is a long, creepy pull until the letoff at some indiscriminate point. It isn’t a great trigger by any means, but compared to the triggers on Gamo’s more powerful rifles, this one is at least user-friendly.

Most kids’ rifles are cursed with triggers that many adults find hard to use, and that doesn’t help the kid one bit. This trigger is very usable, and a surprise on an inexpensive rifle. I suppose the lightness is due to the low power of the rifle, but I’m not complaining. I checked the customer reviews on this gun and several praised the trigger as well, so I’m not alone in thinking it’s a pretty decent unit.

There is one shortcoming, though. The blade rotates back and up as it’s pulled, like most Gamo triggers. That’s one aspect I’d like to see them redesign. A trigger should travel in a straight line to be the most effective.

Velocity test
7.5-grain Gamo Match pellets went an average of 476 f.p.s. The low was 469 and the high was 487. For a new gun, an 18 foot-second spread is pretty tight for a string of 10, so they’ll make it into the accuracy test. The average muzzle energy was 3.77 foot-pounds.

I wanted to try out a different light pellet than RWS Hobbys, so I used the RWS Diabolo Basics that weigh the same 7 grains as Hobbys. They averaged right at 500 f.p.s. and gave me a 20 foot-second spread from 489 to 509. That velocity averaged 3.89 foot-pounds, the best reading of this test, and they’ll make it to the accuracy test, as well.

The one pellet that won’t be in the accuracy test is the 5.4-grain Raptor. I fired only three shots, which registered 432 f.p.s., 345 f.p.s. and 383 f.p.s., from first to last. The only reason I tried them is because I wanted to see if they would respond to a low-powered powerplant, and of course they don’t. Gamo doesn’t advertise them for this rifle, so I take the credit for their failure.

Backwards breech
I overlooked a detail in the first report – the fact that the breech is reversed from the norm and the breech seal is around the transfer port instead of the breech. When I checked the seal, however, I noticed that it is cut pretty bad on one side. Guessing that this could have affected velocity, I removed it and flipped it over, then reinstalled it with a smooth side out. I applied a thin coat of silicone grease to the seal to prevent it from tearing again. I did re-test the velocities, but there were no appreciable changes. 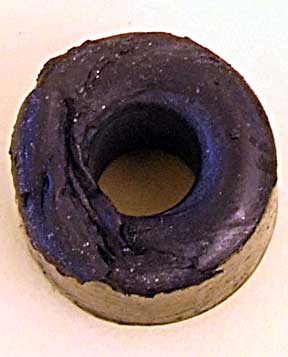 This seal looks compromised, but reversing it didn’t make any difference.

Accuracy next
Gamo provided the scope, so I’ll install it for the accuracy test. Several customers have complained about the small size, but we’ll judge by what happens of paper.