Before we begin, Joe is looking for information about how to convert a CO2 gun to air. He asked for a blog, but I told him several of you readers have done quite a bit of converting already. Is anyone up for a guest blog on what you’ve done?

Today’s post is a rant, but a useful one. It strives to lower the confusion that arises from the improper use of words and terms. Let’s begin.

Bullet tips and bullet noses
A very well-known airgun maker astounded me one day by referring to some lead bullets he was shooting as bullet tips. I asked him to explain. He said if what you put into a firearm (he called it a real gun) is called a bullet, then the lead that sits on the end of the bullet and goes downrange when the gun fires should be called a bullet tip.

“Okay,” I said, “I’ll grant you that, but who ever said that what you load into a firearm is called a bullet? It’s a freakin’ cartridge, consisting of a cartridge case, a primer, some gunpowder and a BULLET. It isn’t a bullet tip, bullet nose or bullet head; it’s just called a bullet.”

These are bullets – every one of them. Not a bullet nose or a bullet tip in sight. 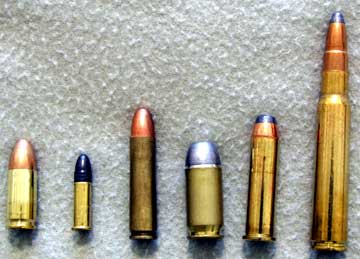 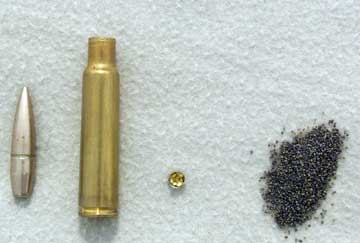 These are the components of a cartridge. They consist of a bullet, a cartridge case, a primer and gunpowder.

“Okay,” sez he, “then what do people load into muzzleloading rifles? Those aren’t bullets, too, are they?”

“Yes, they are! What else would they be?”

“Well you call them round balls. I’ve heard you.”

“Yes, they are both bullets AND round balls – just like cake is both dessert AND fattening!”

You may think I’m poking fun at someone who just uses relaxed speech, but when ANOTHER airgun retailer then offers to order 1,000 .22-caliber bullet NOSES for me to use in a test, I know we have a problem!

Language is supposed to promote communication, but in the past five years I’ve seen it do more to confuse than to promote. Here are a few examples.

The person who shoots his spring rifle enough to get it past the BREAKING period. I’m sure he means the break-in period, but the next person he talks to may not know that.

“…even thought they are true to stage triggers the slopiness make for very creapy triggers.”

You know, that sentence is very close to the Chinglish or Engrish that everyone makes fun of. Only that sentence was written by an American who, presumably, went to school.

I think he means, “Even though they are true two-stage triggers, their sloppiness makes for very creepy triggers.”

Or what about the PCP shooter who puts air into his resolver instead of his reservoir?

Or the thousands of shooters who load the pellet into the breach instead of the breech. It’s not a big deal, but a breach is a forced opening, like a hole in the wall of a dam, or even a breach of contract, not a gun part.

Or the tuner who shoots through his chronometer instead of his chronograph. I sure hope the watch wasn’t on his wrist when he shot through it!

Or the gunstore owner who tells everyone he has a single-pump rifle made by Gamo. It’s really a breakbarrel or just a spring-piston air rifle and many people think I’m being too critical when I call him on it. But if he persists, what will he call the powerplant of a Daisy 853? “Oh, it’s a one-pump gun too, only it uses air.” So, what does the Gamo use – peanut butter?

This is the reason I go ballistic about airsoft ammo being called BBs. First, because they’re 6mm (.236 caliber) plastic balls and second, because if they are BBs, then the guns they are shot in become BB guns by association. I know they’re not and maybe you do, too, but what happens when the mom goes to buy her son a BB gun and all the packages at Wal-Mart proclaim airsoft guns to be BB guns? And then she learns her town has an ordnance against discharging a BB gun in town. What product is she supposed to be buying and is it really illegal in her community? Airsoft guns may not be illegal to shoot, while BB guns, and now I mean real BB guns, are.

I’ve lost the battle on the BB/airsoft gun issue, but I don’t want to concede the rest of the fight, just yet.

114 thoughts on “Learn the language!”