Today, we’ll take the next step in evaluating the Air Venturi Pro Guide spring retainer system by testing a stock .22 caliber RWS Diana 48 right out of the box, then installing the Pro Guide system and testing that. Because many of you are interested in working on your own airguns, I decided to turn the disassembly/assembly into a tutorial.

Right out of the box, the first shot from the rifle shooting 14.3-grain Crosman Premiers was 646 f.p.s. I’m telling you that to reassure all of you chronograph hounds that a new air rifle needs a few shots to settle in. Shot No. 2 went 793 f.p.s.–a heck of a lot closer to the anticipated 800 f.p.s. average this model usually gets with .22 Premiers. I shot a dozen times to let the gun settle down, then a string of 10 after that measured an average of 797 f.p.s. – right in the expected range of 790 to 810 f.p.s., depending on the individual rifle. That works out to 20.17 foot-pounds with this loose-fitting pellet.

Now, it’s time to install the Pro Guide system. The rifle’s action was removed from the stock by loosening the front triggerguard screw and the one forearm screw. Then, the action was disassembled while the gun was held in a B-Square mainspring compressor. Don’t look for one on this website; they don’t carry it any longer, but you can make one for under $20. The two-part plans are located here. You absolutely have to use a compressor with this gun. 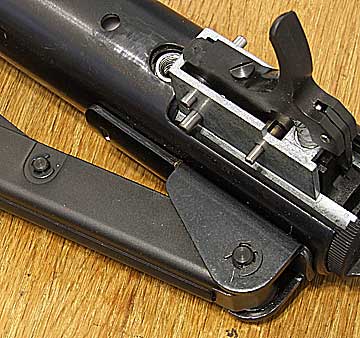 Once the action is out of the stock, remove the sidelever. These two pins held in by circlips must be removed. Remove the smaller pin first (on the left in this picture) and the larger hinge pin last. The linkage arm that connects the sidelever to the sliding compression chamber doesn’t need to be removed. 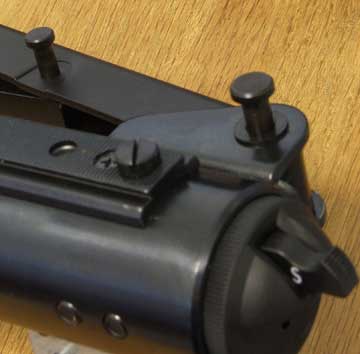 The hinge pin has one washer under the pin head… 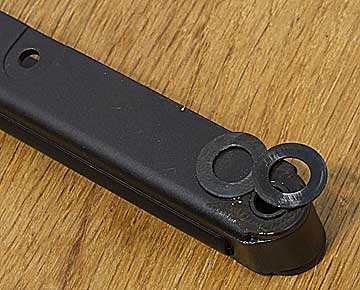 When the sidelever is off, fold the linkage rod down along the barrel of the rifle, so the action will fit into the mainspring compressor. 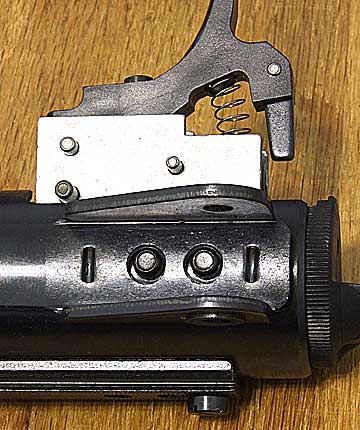 These two large pins located inside the sidelever flange must be drifted out of the rifle. Place your pin punch on this side. The action must be installed in a mainspring compressor with tension on the black plastic end cap before attempting to drift these pins.
Secure the rifle in a mainspring compressor and put some tension on the black plastic end cap. There’s a flat shelf conveniently located on the cap. The next picture shows this flat shelf clearly. 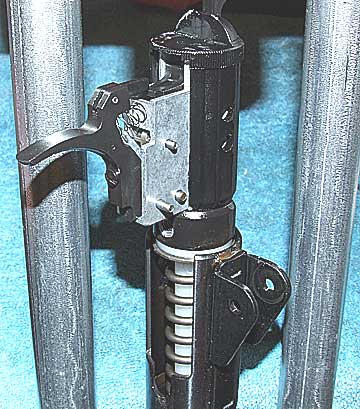 Both pins have been drifted out, and all tension was taken off the end cap. See how far the factory mainspring pushes the trigger group and end cap? The flat of the end cap against which you can apply tension is seen at the top center of this photo. Because I was working on a gun while taking pictures, I cheated by using the flash.
First, drift the rear pin all the way out, then drift out the front pin. I’m not sure the order matters anymore with the T05 trigger unit; but, since it was critical with the T01 trigger, all airgunsmiths learned to do it in that order. These two pins are all that hold the trigger unit, which is sheathed by the end cap, in the rifle. 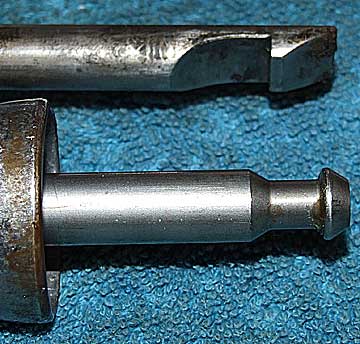 Here’s a comparison of the RWS Diana sear on the bottom and a conventional sear (Hakim) at the top. Since most spring rifles use the conventional piston rod hook-type sear, their triggers have been designed for it. The Diana sear was originally designed for three ball bearings to hold the piston inside the groove. The current Diana triggers don’t have ball bearings, but they have a hook system that does the same thing. This has no impact on the Pro Guide system, but it does impact a gas spring, which is why you don’t see one on the market yet.

Here’s the Diana piston in its entirety. See the swelling at the rear? It helps guide the piston inside the large receiver tube. It never enters the sliding compression chamber, which is why this piston is so long.
I removed the piston so I could show you some things, but you don’t need to remove it (it simply slides out). Once the factory mainspring and rear spring guide have been removed, the Pro Guide system can be installed. 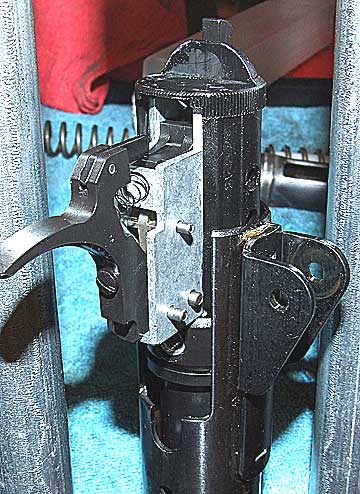 The Pro Guide system is much shorter than the factory mainspring. Even so, you still need a mainspring compressor to get the trigger unit to align with the two pin holes.
Next time, I’ll describe the assembly of the 48, including a couple pointers that’ll save you some time and heartache. I’ll also report on the velocity of the gun with the Pro Guide unit installed. Please note, if I forget to mention it in the next report, that absolutely NO tuning was performed on this rifle. If I hadn’t wanted to show those pictures of the piston, there would have been no reason to remove it from the gun.