In the first report, I told you something of the history of the BSF S20 Match pistol but not everything. The gun I own doesn’t actually say BSF on it. It was exported by Wischo, a company that was also headquartered in Erlangen, the home of BSF. Like RWS, Wischo didn’t make airguns. They put their name on guns made by several other European makers, with BSF among them.

My pistol was purchased from Air Rifle Headquarters; and all the BSF guns they sold, at the time this gun was purchased, came through Whisco. It may seem like trivia unless you’re searching for a certain model. Then, knowing the other players is important–like the names Hy Score, Beeman, Winchester, Geco, Gecado, Original and Peerless can all mean a Diana gun. Before RWS took over distribution of Diana in the 1980s, any of those names could be found on the various models. 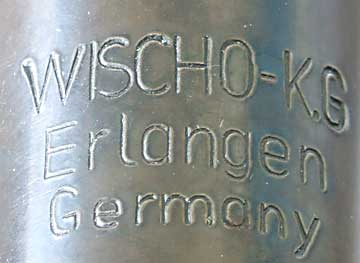 Wischo of Erlangen was the exporter, not the maker.

Many post-war German guns have this strange marking. “West” was added with a separate stamp.

But when you need parts for the gun, then you need to know where it really came from. Then the name Wischo means next to nothing, while BSF S20 Match is all-descriptive.

I also failed to make another connection in the last report. There was another rifle-pistol in the market back then, and it’s still being made today. The Beeman HW70 pistol has a stock that is more contemporary, but look closely and you’ll see the same youth rifle cut down to make a handgun. Even the advertised velocity of 440 f.p.s. is in the same ballpark as the BSF pistol that was rated to 470. We’ll find out today what my example does.

Velocity with 7.9-grain Premiers
The first pellet I tested was the 7.9-grain Crosman Premier. This pellet fits the bore very tight, so I seated it as deep as I could with finger-pressure, because I didn’t want seating friction to affect velocity. It didn’t seem to, as the average velocity was 398 f.p.s., with a spread from 388 to 413.

Velocity with RWS Hobbys
RWS Hobby pellets weigh just 7.0 grains and have been used for decades to clock the fastest velocities with airguns. They’re pure lead pellets, though, so today there are a number of non-lead pellets that are even lighter and faster. I did something unusual while testing these pellets–I lubricated the compression chamber, even though it seemed to be well-lubed already. Pyramyd Air had sent me an Airgun Express .177 cleaning kit to evaluate, and I noted that it contained a small bottle of chamber lube, along with an oiling needle for oiling through the air transfer port. I just couldn’t resist the temptation to oil the leather piston seal. Guess what happened?

While there were several shots considerably faster than the 436 f.p.s. average for this pellet, there were also several that were slower. The result was that I got about the same average velocity, but the maximum spread went 73 f.p.s. – from 425 f.p.s. to 498! The moral of that story is don’t lube in the middle of testing.

Warp drive!
After two lead pellets, I tried a batch of Crosman Silver Eagle hollowpoint pellets. These lightweights are non-lead and  generally less accurate in most guns, but they’re the speed-demons of the pellet world. Nobody uses them for anything but bragging rights, which puts them into a class by themselves. They averaged 553 f.p.s. in the S20 Match, but again the velocity ranged from 496 f.p.s. to 597 f.p.s. That was the lingering effect of the recent lube, however, the average seems about right.

The pistol continues to interest me. I like how it cocks so easily and locks up so solid at the end of the stroke. The light trigger is still a concern, but so far no problems. I’ll keep the muzzle oriented safely, nevertheless, which is good advice for all guns.

Accuracy testing comes next. I don’t know how the high center of the powerplant will affect where the pellet goes, but we’ll see.